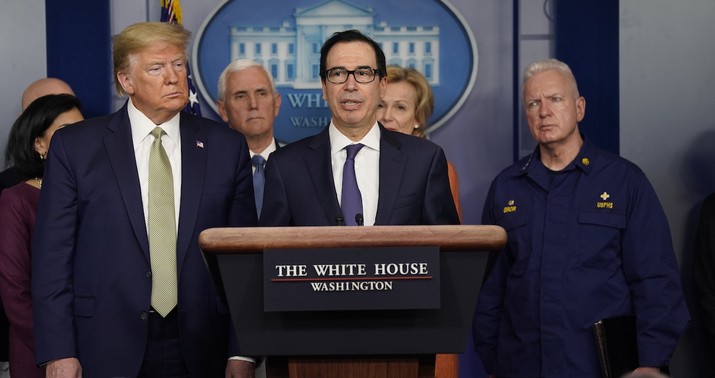 Steve Mnuchin offered a quick fix this morning to a small problem in the Senate GOP’s rescue package that threatened to become a bigger headache. The White House had negotiated a universal tax payment extension in the Coronavirus Aid, Relief, and Economic Security (CARES) Act, but not a filing extension deadline. Rather than amend the bill, Donald Trump used his executive authority to apply the three-month extension to the entire process.

H&R Block will be as pleased as its customers, one imagines:

At @realDonaldTrump’s direction, we are moving Tax Day from April 15 to July 15. All taxpayers and businesses will have this additional time to file and make payments without interest or penalties.

The White House had announced previously they were deferring tax payments for 90 days, but that Americans would still need to file by April 15.

Now, the deadline will be extended into the summer. Mnuchin said Americans with refunds should still file now.

“I encourage all taxpayers who may have tax refunds to file now to get your money,” he wrote.

Politico reported that the original plan to require filing by the normal deadline had lawmakers in both parties scratching their heads:

The decision comes after widespread complaints over the administration’s previous plan to give people who owed the IRS an additional 90 days to pay, without penalties or interest, yet still required them to file their returns by April 15.

Many called that plan confusing, with lawmakers on both sides urging the administration to synchronize the dates. Senate Republicans unveiled plans yesterday to postpone the filing deadline as part of their stimulus legislation now pending in Congress.

This looks like a problem created by tunnel vision at Treasury, which has focused entirely on addressing the economic damage of the COVID-19 outbreak. That would explain why they wanted everyone to file by April 15, so that refunds could go out immediately while they offered a blanket extension to everyone who owed money. The problem, however, is that people who don’t do their own taxes will have to sit around tax offices sometime over the next four weeks to meet the normal deadline — at the very same time governments on every level are trying to limit social contact and aggregation of people in confined spaces.

The change will take away the pressure to meet that deadline, which is one anxiety Americans can now postpone — mostly. Taxpayers shouldn’t entirely breathe easier on this point, however. States with income taxes set their own deadlines, usually if not universally on April 15, and neither Treasury nor Congress has the authority to address state deadlines. California had already extended its filing and payment deadline to June 15, CNN notes, but that might change again now that Gavin Newsom has locked down the state.

Clearly the administration would prefer that this example would lead the states to shift their own deadlines, but that has its own problems. The federal government can wait for tax revenues, but states can’t do extended deficit spending — and the lack of retail activity is already going to hammer their projected revenues this year. If they have to push off income-tax payments for another quarter, that might put them in real trouble for handling the coronavirus in the meantime. Bet on a push from states for a new bailout to help them get past that economic crunch before they pledge to move their own tax deadlines.