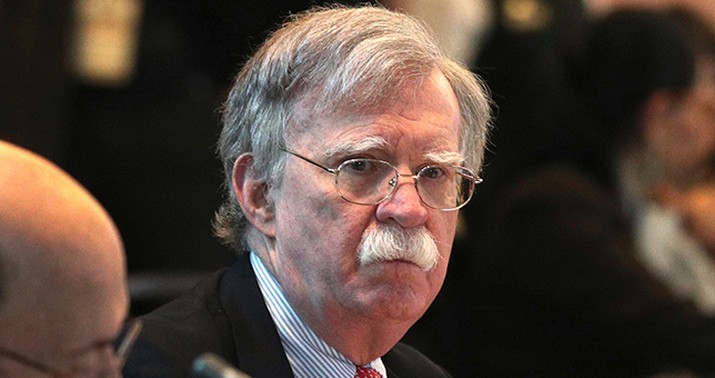 Cancel the Senate Republican Regret Tour? Not exactly. Last night at Vanderbilt University, fellow former national security adviser Susan Rice scolded Bolton for keeping his mouth shut. Bolton responded by arguing it would have made no difference at all:

Former national security adviser John Bolton on Wednesday denounced the House’s impeachment proceedings against President Donald Trump as ”grossly partisan” and said his testimony would not have changed Trump’s acquittal in the Senate, as he continued to stay quiet on the details of a yet-to-be-released book. …

That’s, er, not going to sell many books, unless Bolton means more that Senate Republicans wouldn’t have changed their votes no matter what Bolton would have said under oath. That much is pretty obviously true, given the less-than-serious matter over which impeachment was being fought — a lethal-aid package to Ukraine that got delivered anyway, and in the proper budget year. The trial wouldn’t have gone any other way because of the highly partisan nature of the impeachment in the House, too, which Senate Republicans were loathe to endorse even tacitly.

As it turns out, Bolton doesn’t want to endorse it either. In fact, he called out Democrats for committing “impeachment malpractice”:

Bolton contended that the House “committed impeachment malpractice,” drawing some grumbling from the audience, saying “the process drove Republicans who might have voted for impeachment away because it was so partisan.” He also said he didn’t expect the Senate to vote against having him testify.

The big risk in voting down an attempt to subpoena John Bolton for the Senate impeachment trial was that his testimony would have changed the direction of impeachment. Bolton’s sudden volunteering to appear certainly suggested that he had more to add about quid pro quos and aid to Ukraine, so much so that House Democrats demanded that he appear — and release Chapter 14 of his upcoming memoirs immediately. And it sounds here as though Bolton thinks his testimony should have changed the direction of the trial, which means it’s not a nothingburger.

At least Bolton sounds a little more sore at Democrats than Republicans over the futility, but that’s not going to matter once the book comes out. The best thing that could happen now to Senate Republican incumbents is for the book to come out as soon as possible, so that the damage control can get started months ahead of the general election.

Is that a threat or ... ? Ilhan Omar's response to tweeter who mentions adultery comes off as pretty absurd — and pretty darn violent

Take it from a birdfarm sailor: Get our squids off the Roosevelt

And do it now