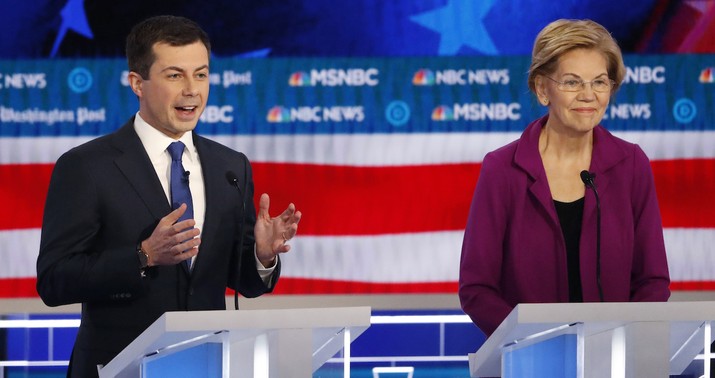 Just imagine if anyone noticed that former Bain executive Deval Patrick entered the Democratic presidential primaries last month! Instead, progressive activists have taken aim at Pete Buttigieg over his work more than a decade ago consulting for Blue Cross Blue Shield and other corporations while working for McKinsey. They even have a new nickname for Buttigieg, Politico reports:

Hours after Pete Buttigieg released his list of clients at McKinsey, the left already had a nickname teed up for him: “Pete Romney.”

Rule #1: Don’t cooperate. Buttigieg finally caved under pressure from activists for full transparency. Perhaps he assumed that full transparency was all they wanted. If so, Mayor Pete just learned a very important lesson about the hard Left and its tactics.

The use of “Romney” as a derogatory terms is silly in two ways. First, Buttigieg didn’t use or make his fortune in so-called “vulture capitalism,” nor does he have a fortune at all. He worked as a corporate consultant, nothing more. It’s an attempt at a class-warfare argument against a noncombatant, for crying out loud. Second, Romney did nothing wrong anyway in his business operations, despite all of the blathering about Bain Capital.

So what did Buttigieg do for his McKinsey clients? Er … math and PowerPoint, as it turns out:

But it wasn’t until Buttigieg unveiled details this week about the clients he served that progressives pounced. Warren and Sanders’ allies are seizing on the fact that he did work for the health insurance giant Blue Cross Blue Shield of Michigan, which laid off hundreds of workers after retaining McKinsey, to paint Buttigieg as unelectable. …

To Buttigieg’s supporters, the assault is more than a stretch: They’ve argued that he was just a junior staffer at the time and stopped consulting Blue Cross Blue Shield of Michigan in 2007, well before it cut jobs. Still, in a political climate where lawmakers and presidential candidates routinely invoke health insurers as evil vultures preying on sick Americans, the left found its opening.

“These attacks are false and irresponsible,” said Sean Savett, rapid response communications director for Buttigieg. “Pete’s work at Blue Cross Blue Shield consisted of three months of analyzing overhead expenditures — things like rent, utilities, and travel costs. His scope of work did not involve policies, premiums, or benefits. This was his first client study, so it largely involved on-the-job training to develop skills using spreadsheets and presentation software.”

It’s always good to see a rare occasion in the media where someone other than a Republican or conservative pounces. Elizabeth Warren is also pouncing on Buttigieg for his consulting and his fundraising, even though her consulting work has far more contradictions to the progressive agenda than Buttigieg’s. Warren is going after both Joe Biden and Mayor Pete for setting up big-ticket fundraisers in an era of small-donor populism:

“Unlike some candidates for the Democratic nomination, I’m not betting my agenda on the naive hope that if Democrats adopt Republican critiques of progressive policies or make vague calls for unity that somehow the wealthy and well-connected will stand down,” Warren plans to say at the New Hampshire Institute of Politics at Saint Anselm College, in what the campaign considers an attempt to draw a contrast with her rivals.

“Unlike some candidates for the Democratic nomination, I’m not counting on Republican politicians having an epiphany and suddenly supporting the kinds of tax increases on the rich or big business accountability they have opposed under Democratic presidents for a generation.” …

Warren does not name her rivals by name, according to the excerpts. But by calling out specific things Biden and Buttigieg have said or done during the campaign, she leaves no room for interpretation. Pointing to Biden telling attendees at one fundraiser that “nothing would fundamentally change,” and to Buttigieg launching a “National Investors Circle” for people who pledge to raise over $250,000 for his campaign, she will argue they are supporting an inherently corrupt system.

“When a candidate brags about how beholden he feels to a group of wealthy investors, our democracy is in serious trouble,” Warren will argue.

Funny, I don’t recall this being a big issue for Warren when Hillary Clinton did the same thing three years ago in the general election. Somehow I doubt that Warren will criticize the eventual nominee when that person engages with big-ticket donors to run against Donald Trump, either. It’s fair game in a primary fight, but Warren’s own track record and client list from her consultation work does suggest that she’s tossing stones in the near vicinity of a glass house.

In the meantime, though, we can all enjoy this blue-on-blue internecine fight over who’s the more true-blue candidate. And while all sides play class warfare over PowerPoint and math, voters can also learn that Rule #1 about cooperating with progressive activists, too.