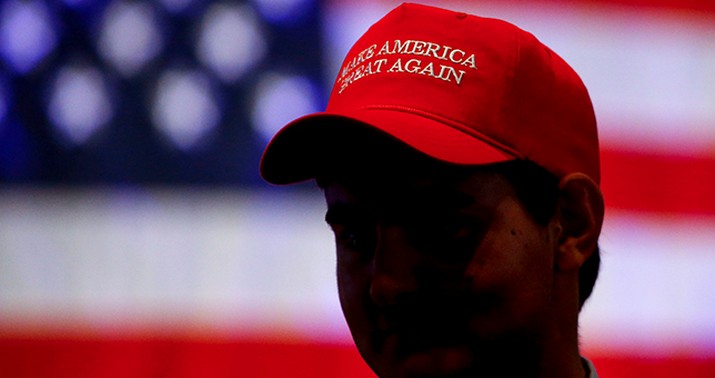 What could happen is so much worse, apparently.

In Nashville Daniel Sprague was out on the town with friends celebrating his birthday. Outside of an establishment he was grabbed from behind and sucker-punched by a woman. She was enraged that he was wearing a red baseball hat, believing it to be the recognizable pro-Trump item, except her anger seems displaced. The hat was given to Sprague for the occasion, reading ‘’Make Fifty Great Again’’.

The familiar storyline of people believing the mere presence headgear justifies violent outbursts was once again in play, but it was only one instance of a recent spate of seemingly partisan attacks. This weekend in Jacksonville Florida a man drove his into a portable gazebo set up in a store parking lot by Trump supporters for voter registration and outreach. The driver freely admitted he intentionally targeted the group and even expressed disappointment that his attempt to record the incident on video had failed.

Just days earlier in Marion County, Florida at a pro-Trump rally, a 49 year old man showed up brandishing a sword and threatened many in attendance. He was arrested and is currently in jail facing ten counts of assault with a deadly weapon. Aside from the violent aspects and that all of the targets are the same there is one other similarity to these stories — the mainstream press is noticeably disinterested in it all.

The common plotline and concentrated timelines would normally indicate a trend is in play and, considering the media has shown itself to be very vocal about the concept of politically-motivated attacks, expected to be something of interest to journalists. We have been told repeatedly that the current climate in this country is deeply divisive, and in particular the rhetoric heard or read from President Trump was going to lead to violent confrontations. Yet when the violence that has manifested is actually coming from Trump’s opponents the media either downplays the acts, or ignores them outright.

The story of a man using a van as a weapon to exact political retribution would be expected to garner natural media interest, yet as a sign of just how dispassionate the press was towards this disturbing act is we can look to the New York Times. The paper of record could barely be bothered to cover it — in fact, it did not cover it. The Times merely went with an Associated Press wire report.

Perhaps giving a voice to all of the general apathy surrounding this tale there was avowed Never Trumper Charlie Sykes, who was actually appearing to be bothered by any mention of the event. Upon hearing about how the Times appeared to be dragging its feet before finally posting a wire story on the attack Sykes sarcastically responded with, ‘’Oh thank God…because this is clearly one of the most important stories in America today.’’

Over at Politico they took it one beat further — but let us at least give them credit for giving the story original coverage. Florida political reporter Gary Fineout, covering the event, somehow strained to almost make it appear as if those targeted in the attack were the villains. ‘’Republicans vow ‘revenge’ at ballot box after volunteers nearly hit by van.’’

Bonus points as well for the use of the animated van acting of its own accord. Almost expect to see the subheadline – “Unbiased neutral vehicle without motivation hit a table.”

While I do not suggest a requirement to highlight and hype every possible confrontation, there is a need to call out the media for its lax attention to both details of this nature as well as its own messaging. If they want to sell us on the inherent danger they find in conventional political speech then they need to be exposed for ignoring the actual violence they have predicted but then choose to ignore — all because those enacting the violence pose an uncomfortable reality in contradicting their narratives.