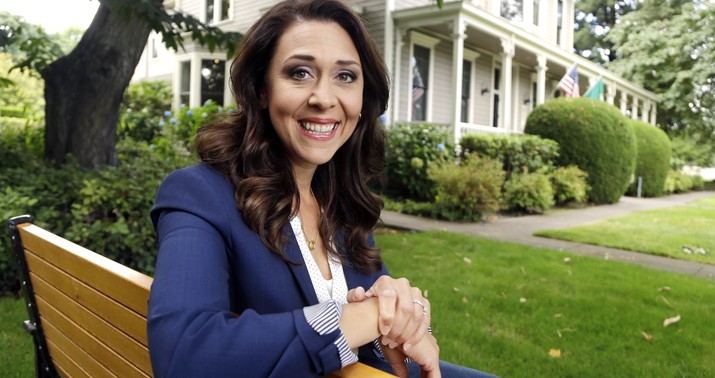 Impeachment is retreating in our rearview mirror but before it disappears let’s take a minute to remember how one of the very few Republicans in the House with real political courage was betrayed not once, not twice, but three times by her colleagues as it played out. And the third time around, it was a bipartisan effort.

When you wonder why we have so many garbage people in Congress, think of this episode and see what good people get when they try to do what’s right.

Jaime Herrera Beutler of Washington was one of the 10 House Republicans who voted to impeach last month. Many, many more House Republicans wanted to impeach, we can safely assume based on the overwhelming vote to keep Liz Cheney in her leadership position, but only 10 had the stones to pull the trigger and accept the electoral consequences. Herrera Beutler was one. She wasn’t done, though. On Friday night, after Trump’s defense had wrapped and with the Senate poised to issue its acquittal the next day, CNN dropped a bombshell claiming that Kevin McCarthy called Trump during the Capitol riot begging for help — and Trump responded by seemingly siding with the rioters, saying, “Well, Kevin, I guess these people are more upset about the election than you are.”

Which seems relevant to a charge of incitement to insurrection, when we’re trying to figure out what Trump intended.

CNN cited “multiple Republicans briefed on [the call]” as sources but it turns out Herrera Beutler had actually gone public with what she knew about it weeks before, telling a local paper and then a town hall audience what McCarthy had told her. She confirmed it to CNN for its new story as well. (“We should never stand for that, for any reason, under any party flag,” she said of Trump’s comment to McCarthy. “I’m trying really hard not to say the F-word.”) And then, for good measure, she dropped this statement on Friday night:

Pay attention to the language there about “countless conversations” with colleagues and the closing paragraph inviting fellow Republicans to come forward and corroborate what she said. You don’t need to read very far between the lines to see what she’s saying: It’s an open secret within the House Republican caucus that Trump defended the rioters during his conversation with McCarthy, and not only were just 10 willing to vote to impeach, no one except Herrera Beutler herself was willing to go on the record to confirm the call. Her caucus hung her out to dry on January 13 by not voting with her and then they hung her out to dry on Friday night by not speaking up to say, “She’s telling the truth.”

And even so, knowing that she was likely to end up on a political island here with Trumpers furious at her, Herrera Beutler stepped forward by issuing her statement. She was offering herself as a witness, knowing that it would make her MAGA public enemy number one. That takes guts. The least Democrats could do would be to call her as a witness and make sure that her show of courage didn’t go for naught — one would think.

But they choked. The House impeachment managers did ask for a vote authorizing the calling of witnesses on Saturday morning, after Herrera Beutler’s statement had jolted the trial. And unexpectedly, with help from Senate Republicans, it passed. It was a momentous victory for Democrats, opening the door potentially to calling Herrera Beutler to testify, maybe McCarthy, maybe Mike Pence. Trump’s defense team warned that if prosecution witnesses were called, they’d call 100 or more witnesses for the defense — but that was a bluff, since each witness would need to be called by a majority vote of the Senate and Republicans didn’t have 51 votes. And because the Senate was about to recess for a week, spending a few days deposing Herrera Beutler and others wouldn’t have bumped into any pressing business like the COVID relief bill.

The Senate quickly moved to a bipartisan 55-45 vote to consider possible witnesses. Schumer had long deferred to the managers: If they wanted to call witnesses, he said Democrats would support it. Still, the vote on witnesses personally surprised the Senate majority leader, Democrats said.

But after they voted to move forward, House managers had no real plan for what to do next, according to a Democrat familiar with the negotiations: “Senate Democrats gave them the votes, but the managers didn’t know what their next step was.”

During the Senate break after the witness vote Saturday, Sen. Chris Coons (D-Del.) twice came into the managers’ room off the Senate floor, according to multiple Democratic sources. Coons pressed House Democrats to relent, saying their quest for witnesses would cost them Republican votes to convict and maybe even some Democrats.

“The jury is ready to vote,” Coons told the managers, according to a senior House Democratic aide. “People want to get home for Valentine‘s Day.”

I hope Chris Coons had the best g-ddamned Valentine’s Day ever, seeing as how that was more important to him than dramatic on-camera testimony by a member of Trump’s own party about how he had behaved on January 6. The two sides ended up compromising on Herrera Beutler: In return for Dems not calling her as a witness, the GOP would allow lead impeachment manager Jamie Raskin to read into the record the newspaper story described above in which Herrera Beutler recounted what McCarthy told her about the call with Trump. It would be part of the official record, in other words.

…Which is all but completely worthless, as prosecutor Patrick Frey explained in a post. In a real trial, getting evidence admitted is important. In an impeachment trial, where the verdict is known before the proceeding begins, it doesn’t mean a thing. The real jury is the voting public. And the only way to sway that jury is with compelling video evidence, not a newspaper article which 99 percent of Americans will never hear about, let alone read. Deposing Herrera Beutler on camera, knowing that it would be played and replayed a million times on TV and online, would have rewarded her for her bravery and extended the cultural reach of her testimony a thousandfold. But Dems wouldn’t allow it, fearing Republican procedural reprisals of some sort during Senate business or a slowdown of Biden’s agenda or … something. It’s still not fully clear why they didn’t take a day to do it, and anti-Trumpers of all stripes were furious at them for it afterward. Frey was incredulous too, knowing that the key to an effective prosecution is moving the jury with graphic evidence, not drily recounting the facts.

Imagine being Herrera Beutler, risking your career to volunteer important evidence under oath which you knew would make you a pariah within your party, and being told, “Um, no thanks.” For a third time in the impeachment process she was hung out to dry, this time by Democrats. Now she’s antagonized Trump fans and didn’t even get the benefit of providing her evidence in a meaningful format. Here’s your thanks, Jaime:

The gift that keeps on giving to the Democrats.

First voting to impeach innocent President Trump, then yapping to the press and throwing @GOPLeader under the bus, and now a tool as a witness for the Democrats running the circus trial.

A little “snitches get stitches” warning from one of the ex-president’s favorite members of Congress. The only fitting way for this moral travesty to have ended was with McCarthy stripping Herrera Beutler of her committee assignments for trying to do the right thing, but that hasn’t happened. Yet.

By the time it was over, acquittal didn’t seem like such a bad outcome. After all, if the prosecution didn’t care enough to do everything it could to try to win, why should anyone else? Exit question: Why didn’t Pelosi make Herrera Beutler an impeachment manager? Given that she was willing to put herself on the line by testifying, she probably would have been willing.