Tuberville: I told Trump that Pence was under threat while the attack was happening 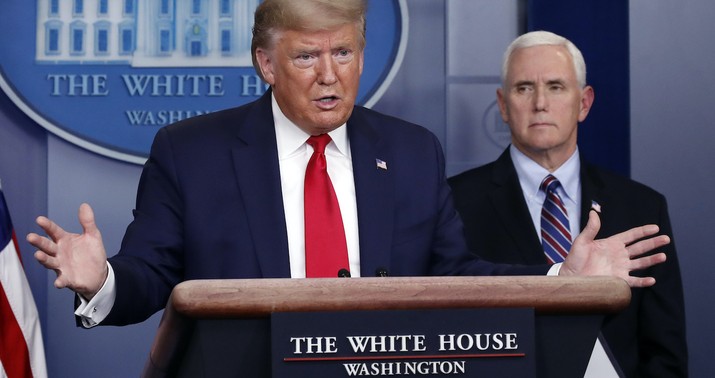 It’s weird yet apparently true that the the revelation most material to the charge of incitement that emerged yesterday happened after the day’s proceedings were over, not during the House Dems’ presentation. And it came from one of the Trumpiest Republicans in the Senate, not from Pelosi’s crew.

It has to do with what Trump knew and when, exactly, about the threat to Mike Pence’s life after the mob launched its attack on the Capitol on January 6. Trump’s team insists that he never wanted his fans at the rally to get violent with Congress, even telling them at one point in his remarks that morning that they should “peacefully and patriotically make your voices heard.” Stipulate for argument’s sake that that’s true, that he didn’t want them to get rough — even though some of his own aides claim otherwise:

As for the siege, an adviser said Trump wanted to see a show of force from his supporters that day.

“Trump likes force,” one adviser said. “He saw people forcefully fighting for him,” the adviser added.

That lines up with what a former senior White House official told CNN about Trump’s reaction to the siege. The official said Trump was “loving” watching the mob.

That jibes with Ben Sasse’s claim that White House officials told him the then-president was “delighted” with the spectacle. But let’s say that he didn’t foresee them breaking into the building and roughing people up, never mind that he warned on Twitter the night before that thousands of his fans were coming to town and “won’t stand” to see the election stolen from him. What about after they had broken in and began roughing people up, chanting “Hang Mike Pence”? What did he want to see happen at that point? Because he was famously slow that day to hop onto Twitter and try to call the mob off.

Sen. Tommy Tuberville revealed late Wednesday that he spoke to Donald Trump on Jan. 6, just as a violent mob closed in on the the Senate, and informed the then-president directly that Vice President Mike Pence had just been evacuated from the chamber.

“I said ‘Mr. President, they just took the vice president out, I’ve got to go,’” Tuberville (R-Ala.) told POLITICO on Capitol Hill on Wednesday night, saying he cut the phone call short amid the chaos.

The existence of the phone call had been previously reported, but the detail that Tuberville informed Trump his vice president was in danger is a new and potentially significant development for House prosecutors seeking Trump’s conviction: it occurred just around the time that Trump sent a tweet attacking Pence for not having “the courage” to unilaterally stop Joe Biden’s victory. And Trump never indicated publicly that he was aware of Pence’s plight, even hours after Tuberville says he told him.

This infamous tweet appeared at 2:24 p.m. ET that day, after the attack had begun.

That was the first public comment Trump made after the mob had started its rampage, and instead of trying to calm things down he was egging on people who already had designs on murdering Pence by reminding them what a disappointment he was. Did Trump know that Pence was already under threat when he sent that tweet? If not, it’s still an inexcusable dereliction of duty for him to have further inflamed a dangerous situation instead of asking everyone to disperse. (Remember that some people in the mob were checking his Twitter feed as the attack was in progress.) But if so, it amounts to him siccing the mob on someone whose life was already known to him to be in danger. You could conceivably make a charge of criminal incitement under the Brandenburg standard stick with facts like that.

So, the important question: When exactly did Tuberville tell Trump that Pence was being evacuated, which would have made clear to the president how real the danger was? Presumably Tuberville’s phone records would give us an exact time but the answer appears to be “before 2:24 p.m.” in any case. “According to video footage from that day, Pence was removed from the Senate at 2:14 p.m. after rioters had broken into the Capitol,” HuffPost notes. A CNN story from a month ago about Trump’s attempts to call senators that day — not to make sure they were safe, mind you, but to encourage them to keep objecting to certifying the election results after the session resumed — also suggests that the call with Tuberville happened before 2:24:

Trump first called the personal cell phone of [Mike] Lee, a Utah Republican, shortly after 2 p.m. ET. At that time the senators had been evacuated from the Senate floor and were in a temporary holding room, as a pro-Trump mob began breaching the Capitol.

Lee picked up the phone and Trump identified himself, and it became clear he was looking for Tuberville and had been given the wrong number. Lee, keeping the President on hold, went to find his colleague and handed Tuberville his phone, telling him the President was on the line and had been trying to reach him.

Via John McCormack, Lee told another reporter that Trump and Tuberville spoke “for the next five or ten minutes” after he handed the phone to Tuberville, which would jibe with a call originating “shortly after 2 p.m. ET.” If Trump dialed in at, say, 2:04, a 10-minute call would have taken him and Tuberville to the moment when Pence was evacuated, at which point Tuberville told him what was happening and that he had to go. The tweet about Pence’s betrayal was sent 10 minutes later. Which means Trump knew Pence was in the crosshairs when he sent it.

Various Republicans pointed out last night after the day’s hearing was done that the Dems’ video presentation was long on emotion and short on proving that Trump wanted to see anyone get hurt that day. But Tuberville’s admission about the timing of the call suggests that he did. At a minimum, sending the tweet while he knew Pence was at risk would mean Trump was indifferent to whatever might befall his VP. Which would be in character: By refusing to block certification, Pence had outlived his usefulness to Trump and could no longer do anything for him, so what did Trump care whether he lived or died? If anything, he may have preferred to see Pence get a dose of “rough justice” as a lesson to others who might dare cross him about what awaits if they do. This is a guy who warned all the way back in 2016 that if he won the most delegates and was blocked from the nomination at the convention his fans just might riot over it. He’s “joked” at other times about paying the legal fees of fans who punch protesters at his rallies. He’s never been shy about conveying that if you get crosswise with him you deserve whatever you get.

But at worst, the timing of the tweet would suggest that he wanted the mob to exact revenge on Pence for his betrayal. That’s true incitement. You would think Dems might want to dig into it. And maybe they will, as the end of their presentation (which has already begun) seems focused on what Trump did — and didn’t do — after the attack had begun to make things better.