Revealed: Trump was so sick with COVID in October, aides thought he might be put on a ventilator 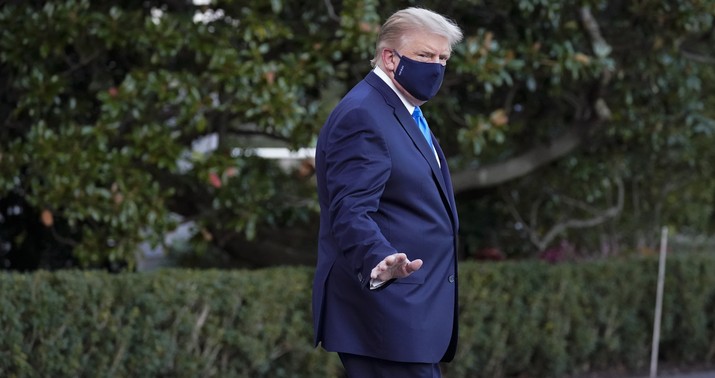 I for one am shocked that we didn’t get the full medical truth from someone who once sent his bodyguard to raid his doctor’s office for his medical files and who, to this day, still hasn’t explained that mysterious impromptu “physical” he got at Walter Reed in November 2019.

We did get part of the truth last October, though. The detail that sticks out most in my mind about his hospitalization was how many medications he received, including and especially dexamethasone. That’s the steroid that doctors resort to in “severe” cases. The use of “dex” and the experimental antibody treatment he received from Regeneron were proof enough that the daily sunny updates from his physicians weren’t the whole story. “The official WH word was essentially (a) the president is completely fine and (b) here are the 19 designer drugs we’ve put him on, fingers crossed,” as Derek Thompson put it. Obviously he had a bad case. We just didn’t know until now how bad.

I feel like the headline for this piece should probably be “Trump Doctors Bullsh*tted Country Repeatedly, Sources Reveal,” but the Times is entitled to frame their own work as they see fit.

His prognosis became so worrisome before he was taken to Walter Reed National Military Medical Center that officials believed he would need to be put on a ventilator, two of the people familiar with his condition said.

The people familiar with Mr. Trump’s health said he was found to have lung infiltrates, which occur when the lungs are inflamed and contain substances such as fluid or bacteria. Their presence, especially when a patient is exhibiting other symptoms, can be a sign of an acute case of the disease. They can be easily spotted on an X-ray or scan, when parts of the lungs appear opaque, or white.

Trump’s chief doctor, Sean Conley, was repeatedly weaselly about the true state of his condition during his sporadic press conferences outside Walter Reed. At one point he was asked if Trump had ever been on supplemental oxygen — which he had, early on in his illness, according to the Times. “Yesterday and today, he was not on oxygen,” Conley replied at one point, elliptically. Another time he was asked whether it’s true that Trump’s blood oxygen had dipped into the low 90s and non-answered by saying that it had never reached the low 80s. I remember a famous photo of Mark Meadows at the time, sitting outside Walter Reed as Conley tried to spin a sanguine prognosis for Trump:

Meadows himself had initially BSed the press about the true state of Trump’s health, telling the press on October 2 that the president’s symptoms were “mild” even though, per the Times today, they were the opposite. (That same day, ABC was hearing from sources that White House staff were “rattled” by the severity of Trump’s illness.) By the following day, though, Meadows himself was sufficiently concerned and frustrated by the happy talk from the doctors that he told reporters the truth on background: “The President’s vitals over the last 24 hours were very concerning and the next 48 hours will be critical in terms of his care. We are still not on a clear path to a full recovery.” Trump eventually found out that he was the source of that quote and predictably was furious.

He was back at the White House by October 6, but it was obvious to everyone by then and really obvious to pros that his illness hadn’t been an easy one. He was visibly sucking wind at times during his famous balcony photo op upon returning to the building. “Doctors at the time noted how Mr. Trump used his neck muscles to help him breathe in those moments, a classic sign that someone’s lungs are not taking in enough oxygen,” the NYT noted today.

Only days into his diagnosis, the first thing President Trump does when he gets back to the White House is take his mask off. pic.twitter.com/kyqvHcSbIl

Still, for a 74-year-old who’d seen his blood oxygen slip and reportedly had seemed destined for a ventilator just five days earlier, he seemed awfully spry in hindsight. I’m eager to read a medical analysis of how his course of the disease turned around so quickly. The layman assumption is that the experimental antibody treatment saved him, but the Times notes that health officials considered that something of a failure since it’s supposed to halt the spread of the virus before it causes hospitalization. Was it the dexamethasone, maybe? The whole weird drug cocktail he was on, which included remdesivir? His recovery was amazing.