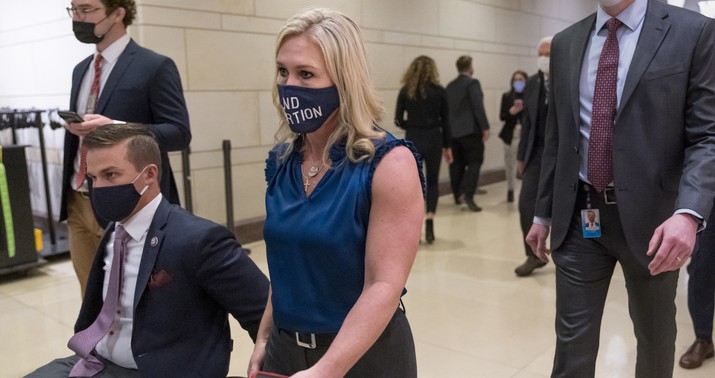 A predictable — and intended — consequence of the Democrats doing what they did. They wanted to make Greene the face of the GOP and they’re on their way, according to Morning Consult.

I’ll repeat what I said recently about this effort, that it reminds me of how savvy media types believed that giving Trump boatloads of free coverage in 2015 and 2016 would ultimately redound to Democrats’ advantage by improving his chances of winning the GOP nomination. After all, Trump couldn’t possibly win in November. And certainly his brand of politics wouldn’t have any lasting effect in shaping Republican political culture, which to that point had been laser-focused on traditionally conservative goals like shrinking government.

Playin’ a dangerous game here, but they’re playin’ it well so far. Here’s how Greene’s favorable rating has evolved from before she was stripped of her committee assignments to after. (Green denotes favorable, red unfavorable, of course.)

From -2 to +7 among Republicans, who are *probably* warming up to her on pure negative-partisanship grounds: “If the left is against her, surely I must be for her regardless of what she’s done.” Among the general public, however, Greene’s gone from -20 to -23. That’s what Dems wanted, that’s what they’re getting.

They wanted to raise her profile too, of course, since you can’t make someone the face of the other party if no one knows who she is. And they’re succeeding at that mission as well:

And as you can see here, MTG is already as well-known as McCarthy. That’s something you couldn’t say about AOC and Pelosi at this point last cycle.
https://t.co/GJCkc6sJQu pic.twitter.com/LWPXIgW6HO

She’s only a month into her term and she’s already better known than most Republicans in Congress. Apart from Trump, McConnell, and figures like Cruz and Marco Rubio who’ve run for national office before, she must be one of the most best-known GOPers in the country already. That’s why Dems took the extraordinary step they did in stripping her of her assignments knowing that the GOP will retaliate against the likes of Ilhan Omar once they’re back in the majority. Biden, Schumer, and Pelosi want to tighten their grip on suburban voters and they need a Trump-like boogeyman to do that. Greene was the obvious candidate and taking unprecedented action against her was the fastest way to introduce her to the national electorate. They’re willing to pay a price down the line in the form of reprisals in order to accrue that benefit now.

That’s why one had to laugh when Greene taunted Democrats the day after they moved against her, boasting that she was free to speak her mind and sh*tpost more aggressively now that she no longer had committee responsibilities to tend to. That’s what they’re hoping for!

Here’s another interesting nugget in the Morning Consult poll. The top shows Cheney’s favorable rating among Republicans before and after the House GOP voted on whether to keep her in leadership and the bottom shows her rating among Americans generally:

The House Republican showdown over Cheney drove major media coverage of her impeachment vote against Trump and her defiant refusal to apologize for it, which one would expect to further sour Republican voters on her. It didn’t. She actually gained a few points in net favorability within her own party, moving from -27 to -14, as well as among the wider public. I don’t know what to make of it. Maybe the bottom line that the caucus voted to keep her on convinced a few fencesitting Republican voters to give her a second chance. Or possibly the mere fact of her defiance earned her some grudging respect even among soft detractors. In a caucus full of cowards, Cheney’s display of balls stood out.

Here’s another set of numbers from Gallup that’s relevant to the party’s Greene/Cheney divide:

In just three months since Election Day, over the course of the “stop the steal” campaign that produced the attack on the Capitol on January 6, Republicans’ approval of their own party dropped by double digits. I’m tempted to wonder if that’s just a natural “cool down” period after the intense partisanship of the election, but if that were true we’d expect to see Democrats’ numbers dropping too and we don’t. Their favorable rating is up from 45 percent in November to 48 percent today.

Some of the disaffection within the GOP may be a simple backlash to losing. Obviously you’ll be more psyched to be a member of your party if it just won a national election. Some of the sentiment may also be coming from Trump fans who are angry with McConnell and the Senate caucus for not “fighting” hard enough to overturn the election. That would be a Republican version of what happened to Fox News after election night: Some hardcore MAGA voters were so dismayed after the network called Arizona for Biden early and ultimately called the whole election for him a few days later that they headed off to Newsmax and didn’t look back. The same thing may be happening in response to the GOP establishment’s recognition of Biden’s victory.

But we shouldn’t overthink it. Obviously, there’s some component of the decline that reflects disgust at what happened at the Capitol and the “stolen election” propaganda that preceded it even on the right:

An analysis of January voting records by The New York Times found that nearly 140,000 Republicans had quit the party in 25 states that had readily available data (19 states do not have registration by party). Voting experts said the data indicated a stronger-than-usual flight from a political party after a presidential election, as well as the potential start of a damaging period for G.O.P. registrations as voters recoil from the Capitol violence and its fallout…

“Since this is such a highly unusual activity, it probably is indicative of a larger undercurrent that’s happening, where there are other people who are likewise thinking that they no longer feel like they’re part of the Republican Party, but they just haven’t contacted election officials to tell them that they might change their party registration,” said Michael P. McDonald, a professor of political science at the University of Florida. “So this is probably a tip of an iceberg.”

But, he cautioned, it could also be the vocal “never Trump” reality simply coming into focus as Republicans finally took the step of changing their registration, even though they hadn’t supported the president and his party since 2016.

By comparison, just 79,000 Democrats left their party over the same period. Again, everyone’s motive is different. Some may have been longtime anti-Trumpers finally making things official after the Capitol attack, some may have been pro-Trumpers disgusted by the Senate GOP “abandoning” Trump, but some certainly are people like our own Ed Morrissey who concluded that the travesty at the Capitol encouraged by Trump and his cronies was a breaking point for his faith in the party. As it happens, a separate Gallup poll this week finds the share of the public that identifies as Republican down to 24 percent, the lowest number recorded in nearly three years. A lot of people have left lately, some temporarily no doubt. Some less so.

You can see from all this why Kevin McCarthy went easy on Greene *and* on Cheney. If some of your voters are ditching the party because they think it’s too hostile to populism and some are ditching because they think populist influence is too great, the only way to hold things together is to try to placate both sides. Refuse to strip Greene of her assignments to show the populists that you won’t side with Democrats against them — but also refuse to oust Cheney from leadership to show the traditional cons that Matt Gaetz isn’t running the caucus, McCarthy is. That’s his strategy. We’ll see how it pays off for him as Dems keep working to make Greene the second-most famous Republican in America.