Marjorie Taylor Greene: How sure are we that the Capitol rioters were Trump supporters? 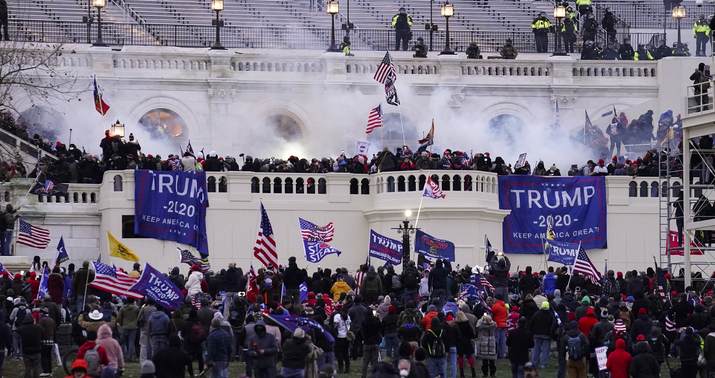 An interesting theory kicking around on Twitter today: Did Greene post the tweets below on her own initiative or is she passing along a message from a powerful ally in Florida who can no longer access the platform on his own?

Either way, here she is back to publicly entertaining MAGA-friendly conspiracy theories less than a week after being disciplined for it. On some level, Kevin McCarthy probably thinks that Democrats solved his Greene problem for him by stripping her of her committee assignments. In reality, they may have made it worse. If she has nothing to do in Congress at this point except cast an occasional floor vote and sh*tpost, then we should expect a lot more sh*tposting going forward.

Hopefully a reporter’s going to track her down today and ask her who, precisely, she thinks attacked the Capitol on January 6 wearing MAGA hats and waving “Trump 2020” flags. A mix of true Trump fans and many more Antifa infiltrators, I assume she’ll say.

They placed pipe bombs at the RNC and the DNC the night before.

They did NOT just target one party.

They targeted Republicans and Democrats.

They were against the government ALL together.

I will be forever grateful to my Republican colleagues who bravely helped the police protect us and blocked the door.

They courageously risked their lives against the attackers trying to get in. pic.twitter.com/xnIrdSOkrK

This impeachment trial a circus for the Democrat media mob to entertain the masses that they have brainwashed and addicted to hate, so they don’t see the Dem policies being rapidly forced into place that are destroying our lives, stealing our freedoms, and putting America last.

It’s ironic that a member of Congress known for being Very Online would have missed the copious online documentation left by the rioters of who they were and why they were at the Capitol. Or, failing that, she could read some of their court pleadings. They haven’t been shy about explaining their motives.

Another curious wrinkle to the insinuation that the attackers were some sort of bipartisan mix of radicals is the fact that the then-president was allegedly excited to watch their handiwork. Greene may have been terrified but Trump’s emotions as the scene played out were different:

Former Trump aides recall the then-President having enjoyed the spectacle created by the riot at the Capitol. Trump was “loving watching the Capitol mob,” one former senior White House official said.

That’s what officials told Ben Sasse too. House Dems are reportedly planning to make incitement after the fact part of their impeachment case, no doubt flagging tweets like this:

He posted that after the attack was already under way, when Mike Pence’s life was in danger. It’s worth noting that Trump himself seemed to believe that the rioters were true-blue MAGA fans, telling them in the video he posted later in the afternoon of January 6, “We love you, you’re very special,” and “I know how you feel, but go home and go home in peace.”

Peter Meijer, one of the 10 House Republicans who voted to impeach (and the only freshman), responded to Greene this morning:

The #Jan6 organizers were Trump supporters. They attacked the Capitol to stop the Electoral College certification & interrupt the constitutional transition of presidential power, emboldened by lies about a stolen election and hope they could stop the steal on Jan 6. Enough lies. https://t.co/EfahAL2HgN

Meijer knows intimately that being a member of the GOP is no shield from the wrath of MAGA fans. He’s the guy who talked about buying body armor after he cast his impeachment vote to protect himself from threats. He held a townhall last week in Michigan and was lambasted by Republican constituents. Greene is right that the rioters on January 6 were after members of both parties — their prime target was Trump’s own VP, remember — but that says nothing about their partisan loyalties. All it does is underline the central fact of American politics in 2021: Strong-form Trump supporters are fanatically loyal and their loyalty is to the man himself, not to his party. Greene seemed to grasp that just a few days ago.

Georgia Republicans are already wondering what to do about her in 2022, knowing that Stacey Abrams and her party will try to make Greene the face of the GOP in that year’s election:

Some Republicans want lawmakers to redraw her district later this year to make her reelection more challenging and to shift the party’s attention toward more conventional conservative principles. And her former opponent, Rome neurosurgeon John Cowan, is weighing a 2022 rematch.

“I’ll put it in simple terms: Rep. Greene is an embarrassment to Georgia,” said state Rep. Bert Reeves, a Republican who represents a competitive Cobb County district. “She is the face of radical political extremism, and we don’t need that distraction.”…

Already, state Democrats send multiple fundraising emails a day painting Greene as a member of the “extreme right,” just as she urges her supporters to build her coffers with “emergency” donations during her congressional battles.

How are they going to redistrict her out, though, knowing that she has Trump as a, er, trump card up her sleeve? She’ll win any House primary with the former president campaigning for her. If Republicans in the state legislature don’t want her back in Congress, they’d need to redraw the lines so that she’s in a majority-blue district. And Republicans aren’t normally inclined to just hand over a seat to the other party that might be easily won by a member of their own.

But who knows? Depending upon how much sh*tposting there is between now and 2022, they might conclude that it’s a price worth paying.