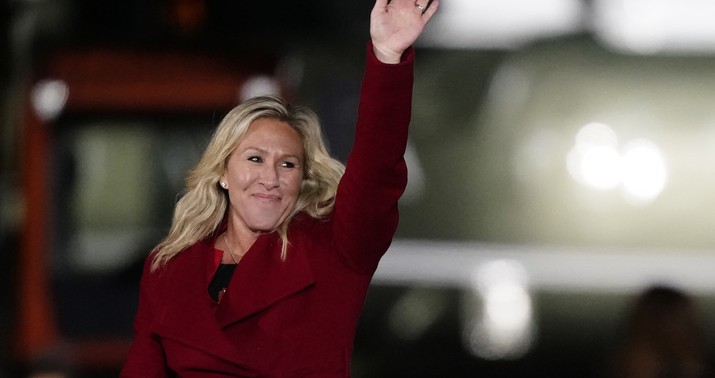 The vote was supposed to happen at 4 p.m. ET but it’s coming up on 6:00 p.m. as I write this and still nothing. There’s no suspense about the outcome; the Democratic majority will vote to boot Greene off of the education and budget committees. The suspense has to do with how many Republicans will cross the aisle and join them.

My guess yesterday before the big GOP caucus meeting about Greene and Liz Cheney was that a few dozen might. Then I read this and recalibrated:

Many Republicans now plan to give Greene a chance. She received a standing ovation at the conference meeting after she disavowed many of her previous beliefs. She told a story about a dark point in her life when she apparently turned to QAnon, according to a person in the room. She said that was a mistake, walked back suggestions that 9/11 and school shootings were a hoax and apologized for how her past statements were affecting them all. After she spoke, even Rep. TOM REED (R-N.Y.), a leader of moderate Republicans, stood up to thank her for sharing her story and indicated he’d give her a chance.

We’re told other Republicans who may have been inclined to vote with Democrats to remove Greene in a floor vote set for today are now reconsidering.

Between that and Greene’s willingness to go to the House floor this morning and … not apologize, exactly, but at least renounce some of her former beliefs, I revised my guesstimate downwards to eight or so. That’s because I assume most of the caucus is thinking of Greene and Cheney as a package deal. Cheney was spared from the wrath of MAGA in the name of unity and now Greene should be spared from the wrath of Democrats for the same reason.

But then I saw this within the past hour and now think even eight Republicans is waaaaay overestimating the final number:

My statement on the full House vote to remove Marjorie Taylor Greene from her committees. pic.twitter.com/fWK4Qiuqi9

Jaime Herrera Beutler is one of the 10 Republicans who voted to impeach Trump. If she’s a no on stripping Greene’s assignments because she thinks it’s a bad precedent for the majority to boot a minority member off of committees, there must be precious few members of the caucus who are willing to cross Greene. Even Liz Cheney, I’d bet, will end up voting no in order to earn back a little goodwill with her populist detractors in the caucus.

It won’t be a pure party-line vote, though. At least one Republican seems likely to vote against Greene:

At least one Republican, Rep. Adam Kinzinger of Illinois, said he plans to vote with Democrats Thursday unless Greene comes out and publicly apologizes and denounces her past actions.

“She stood up and gave a bit of contriteness but then pivoted into ‘they’re coming after you next,’” Kinzinger said on CNN Thursday, describing Greene’s closed-door speech the night before.

Was this morning’s pseudo-apology by Greene enough to bring Kinzinger back onside? I’m skeptical. But I think it’s possible he’ll end up being the only GOPer to vote with the Dems. And if he is, you’re going to hear about it a lot from Democrats:

"So I ask my colleagues on the other side of the aisle, when they take this vote, imagine your faces on this poster. Imagine it’s a Democrat with an AR-15 — imagine what your response would be!" pic.twitter.com/UUEXaUIyqB

One thing Dems have been slippery about: What, precisely, is the offense that disqualifies Greene from her committees? It has to be more specific than “she’s just generally repulsive,” as that standard could be applied to lots of members of Congress if not quite as easily as it is to her. Is it “she’s a conspiracy crank”? Because there’s more than just one of those wandering around the halls of the Capitol too. Is it this?

“If anybody starts threatening the lives of members of Congress on the Democratic side, we’d be the first to eliminate them from committees. They had the opportunity to do so,” Pelosi told reporters Thursday.

Greene has “liked” social media comments before about executing Pelosi for treason and the tweet Hoyer featured in the clip above showing Greene with an AR-15 alongside a photo of the Squad also suggests a sinister intent. If that’s the specific disqualifying criterion — endorsing, or seeming to endorse, violence against a colleague — then Dems could use it to try to argue against any GOP reprisals in the future. “Ilhan Omar may be an anti-semitic crank but she hasn’t called for executing any members of Congress!” Not gonna stop Republicans from ousting Omar, of course, but at least it gives Dems some grounds to complain that ousting her would be dirty pool.

The good news for McCarthy and the GOP caucus is that the Dems are about to “solve” their Greene problem to some degree. She’ll have been punished for what she’s said and McCarthy can point to that when asked about her going forward. The bad news is that it’s unlikely Greene will stay away from conspiracy theorizing over the next two years. What will he do when she lapses back into it? He made the point last night to House Republicans that what say you say *after* you join Congress is what matters, and what ultimately led him to punish Steve King. If Greene starts chattering about some new conspiracy theory later this year, will McCarthy grudgingly admit that Dems were right to oust from her committees?

The vote’s happening right now, as I write this. Stand by for updates. While we wait, I’ll leave you with this:

"I think it was a mistake," Romney said. "I wish he would have" taken a stronger stand.

Update: And indeed, Kinzinger has joined the Dems in voting yes:

There’s one Republican who is voting to strip @mtgreenee of her committees: @RepKinzinger

I’ve said before that he’s in DGAF mode with respect to his political career and this is a further example. I think he assumes he’ll lose his next primary no matter what he does going forward because of his impeachment vote, in which case he might as well do the right thing.

Update: CNN has a comprehensive look at Greene’s digital trail featuring all of the stuff that’s brought us to this moment.

Update: Annnnnd here’s another Republican who voted to impeach, Peter Meijer, joining Beutler in voting no this time for fear of the precedent it’ll set. Today’s vote is an obvious way for pro-impeachment Republicans to try to atone somewhat to angry MAGA voters by, er, declining to punish the kookiest member of the caucus. Note what else Meijer says in his statement: He’ll also vote no on GOP reprisal efforts to oust Democratic members from their committees in the future. The plan to avenge Greene by ousting Ilhan Omar may not go off without a hitch.

My full statement on the move to strip Rep. Marjorie Taylor Greene of her committee assignments attached. Threaded version to follow. pic.twitter.com/eUhPaZqk64

Update: Ah, a surprise. Kinzinger isn’t the only Republican to vote yes on ousting Greene:

Dan Newhouse also voted to impeach Trump. Like Kinzinger, he seems to have gone full YOLO.

Update: Wait — it turns out he hasn’t!

Newhouse has switched to no.

I’m waiting on the name of the other nine. This is genuinely surprising.

Update: And here they are:

News: All three South Florida Republicans @MarioDB, @RepCarlos and @RepMariaSalazar break with the GOP and vote YES to boot @mtgreenee from her committees.

This was a surprise. Story TK

Update: As predicted, by the way, Liz Cheney voted no. Here’s the statement she just sent out:

“Republicans are not the party of QAnon conspiracy theorists, white supremacists, Holocaust deniers, or Neo-Nazis. These views are evil.

“Representative Greene has espoused opinions that have no place in our public discourse. It is our responsibility as Republicans to address these issues inside our own conference.

“Speaker Pelosi and the Democrat majority have no business determining which Republicans sit on committees. This vote today sets a dangerous precedent for this institution that Democrats may regret when Republicans regain the majority.”

Iowa Makes Important 2A Moves Ahead Of Deadline