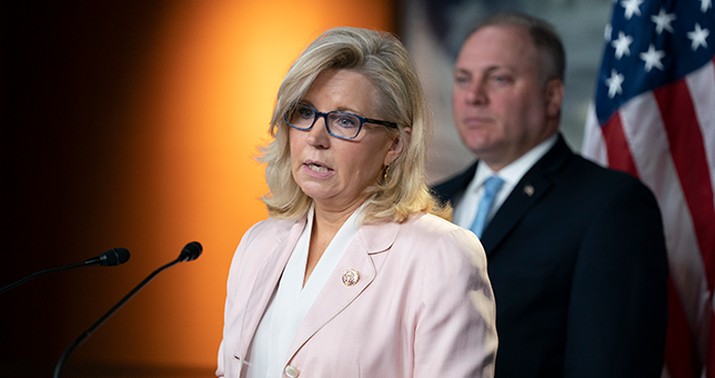 Plenty of pandemic chitchat on tap as usual this fine Sunday morning but the prime topic is the developing GOP civil war, embodied this week in the persons of Liz Cheney and Marjorie Taylor Greene. The star guest: Cheney herself, who’ll give what I believe is her first interview after surviving her leadership challenge to Chris Wallace on “Fox News Sunday.” She’ll be asked what it says about her party that 60 of her colleagues voted to oust her compared to just 11 who voted to strip Greene of her committee assignments for crankery various and sundry. She’ll also weigh in on how it feels to have top MAGA bro Matt Gaetz campaigning against her in her own state knowing that her caucus leader, Kevin McCarthy, won’t lift a finger to stop him. If “unity” is the House GOP’s new mantra, why does Gaetz get an exemption?

Another tangent of the Republican civil war, the impeachment trial that starts tomorrow, is also on the agenda. Pat Toomey, a likely vote to convict, is set for “State of the Union” while two sureshot votes for acquittal, Lindsey Graham and Rand Paul, will chat with “Face the Nation” and “Fox News Sunday,” respectively. Expect Graham to make one last pitch to a very special viewer who might be watching from home in Florida to not have his lawyers push conspiracy theories about election fraud at the trial. Senate Republicans will vote “not guilty” no matter what but how humiliating that vote ends up being for them depends entirely on Trump. We’ve been good dogs for you, Graham will tell the former president this morning. Don’t reward us for it by abusing us.

An array of Democrats are scheduled too to discuss Team Biden’s pandemic response and what’s next for the White House after the coronavirus relief package passes. Anthony Fauci will speak with “Meet the Press” about the vaccination ramp-up, Janet Yellen will chat with “Face the Nation” and “State of the Union” about the COVID stimulus, and new transportation secretary Alfred E. Neuman will discuss the prospect of a big infrastructure package with “This Week.” Oh, and the possible next attorney general of California, one Mr. Adam Schiff, will talk to “Meet the Press” about Impeachment 2.0 and his plans to hopefully leave Washington behind forever. An interesting potential question for Schiff this morning: Would Trump have been reelected if not for Impeachment 1.0? The full line-up is at the AP.

'What I did is tell my people the TRUTH': Gov. Kristi Noem DROPS Dr. Fauci for accusing her of ignoring medical advice and it's GLORIOUS (watch)