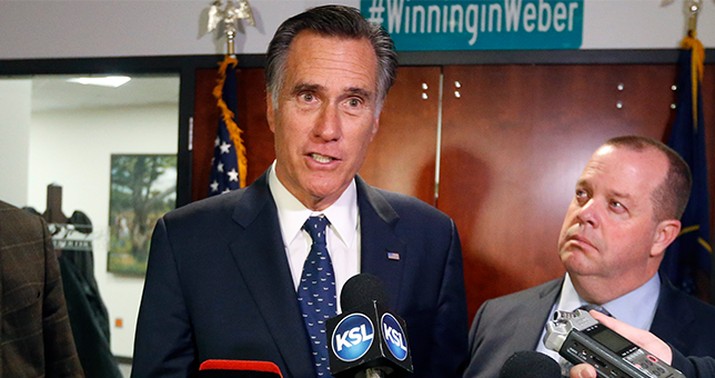 A consequential follow-up to yesterday’s post about Romney’s shockingly progressive proposal to send monthly checks to American families for every child they have (with a total cap of $1,250 per month). Democrats swooned over it, but what made it intriguing was the possibility that it would attract interest among his Republican colleagues. The nationalist wing of the party isn’t well represented in the Senate but it does boast some big names. Josh Hawley distinguished himself during the battle over a new COVID relief package in December by demanding $2,000 checks for American households. And Marco Rubio and Mike Lee have lobbied for years to expand the child tax credit so that families get back more of their money at tax time for their children. If Romney brought Rubio and Lee onboard with his proposal, that’d be a formidable trio of reformers who might be prepared to deal with Biden in order to shovel more cash at parents.

So imagine the dismay among Dems last night when Rubio and Lee put out this statement essentially crumpling up Romney’s plan into a ball and tossing it into the trash.

We support working families, the two said, not welfare queens. Now that the scarlet “W” has been applied, Romney’s presumably all by himself on this one.

“However, we do not support turning the Child Tax Credit into what has been called a ‘child allowance,’ paid out as a universal basic income to all parents. That is not tax relief for working parents; it is welfare assistance.

“An essential part of being pro-family is being pro-work. Congress should expand the Child Tax Credit without undercutting the responsibility of parents to work to provide for their families.”

Is Romney’s plan “anti-work”? It’s not as “pro-work” as Rubio’s and Lee’s plan: Mitt would send checks to every family with a child irrespective of whether anyone in the home is working or not whereas Rubio-Lee would refund part of a family’s tax burden in the form of a credit to help with the kids. You don’t qualify for the credit unless you’ve earned money and have paid taxes, obviously. That gives mom and dad an extra incentive to hold down a job. The glaring problem with that scheme, of course, is that parents who have been laid off through no fault of their own and can’t find work despite looking — a common phenomenon in America 2021 — end up with squat under Rubio-Lee. The point of Romney’s plan is to reduce child poverty, and families that have no income are at the greatest risk of being impoverished.

What’s the more urgent priority? Giving parents some marginal additional incentive to work by making aid to their children contingent upon paying taxes? Or making sure their kids don’t starve when mom and dad are unemployed and trying to survive on UI?

Romney’s scheme is “pro-work” in that a parent still has a strong incentive to hold down a job. At a maximum, a family with multiple children could take in $15,000 per year under his scheme, a meaningful amount but not a sum that any multiperson household would feel comfortable trying to live on. A plan that phased out benefits as parents earned more money would properly be described as “anti-work” by disincentivizing employment — but Romney’s doesn’t do that:

Like try actually talking to a poor person someday. In all my years, I’ve OFTEN heard people talk about losing benefits if their income rises, but the benefit their talking about isn’t tax credits y’all its HOUSING and FOOD and HEALTHCARE.

What makes this even more galling is that @marcorubio and @SenMikeLee seem to not even understand that Romney’s plan is actually FIXING a huge welfare cliff: the massive penalty the EITC puts on working-class marriage!

Right, the Earned Income Tax Credit tends to benefit single parents. Romney’s plan would scrap that credit and substitute his checks-for-kids program, which would make it less onerous for parents to get hitched:

But what I’d emphasize is two big differences:
1) Romney’s plan clearly helps the “very poor” more
2) It shifts the point at which marriage becomes an unambiguous net income positive from about $28,000 to about $12,000.

The whole point of his plan is to promote marriage and child-rearing. The point of Rubio-Lee is to promote work, even at the cost of a much higher child poverty rate. (“[R]esearch shows that giving cash assistance to needy parents improves their children’s health, test scores, educational attainment, and future employment prospects; which is to say, it promotes work,” writes Eric Levitz.”) And the irony of slapping Romney’s plan with the “welfare” label is that it would actually eliminate certain other kinds of welfare that currently exist, like Temporary Assistance to Needy Families, in order to pay for his program. Remember, his scheme would be deficit-neutral *if* Democrats agreed to all of the cuts he suggested as pay-fors, including scrapping the state and local tax deduction (which, granted, they aren’t going to do). But it’s not some budget-buster by design. What it is, really, is a streamlining of existing welfare programs and tax credits to get more bang for the buck. Instead of making taxpayers apply for a tax credit on their 1040s and jump through hoops for TANF or the EITC, he’d simplify the system with a single monthly check at no extra cost to taxpayers. “Romney changes how you get money, yes. But he doesn’t really change the maximum potential benefit” to families, Lyman Stone notes.

Stone, a demographer who specializes in family studies, wonked out over Romney’s plan at great length last night on Twitter and came away liking what he saw.

Now, about those extremely-poor people.

I know a lot of folks worry about people never working, creating cultures of dependency, etc.

I get that worry. But key to understand the vast majority of very-low-income individuals have that income level in just one year.

Most people in intergenerational poverty traps actually live in households that *do* have some labor income. $0 income households are 1) quite rare 2) disproportionately related to unemployment and business losses.

I cannot for the life of me comprehend why there would be any hesitancy at all in supporting a deficit neutral plan which fixes a massive marriage penalty and directly supports families.

The hesitancy, I think, is due to the precedent it would set. The COVID relief cycle has already helped proponents of Universal Basic Income get a foot in the door. Romney’s plan, a sort of UBI for kids, would open the door further. If Rubio and Lee could be assured that the concept would extend no further than streamlined welfare for children, maybe they’d grit their teeth and sign on. But they can’t be assured that, and they don’t want to further condition the public to view monthly checks from the government as some sort of reasonable, even efficient, policy. So Romney’s going to end up on an island all alone here, with his GOP colleagues turning up their noses at his “welfare” scheme and Democrats walking away because of his insistence that the plan be deficit-neutral.

No State of the Union Address, No President?