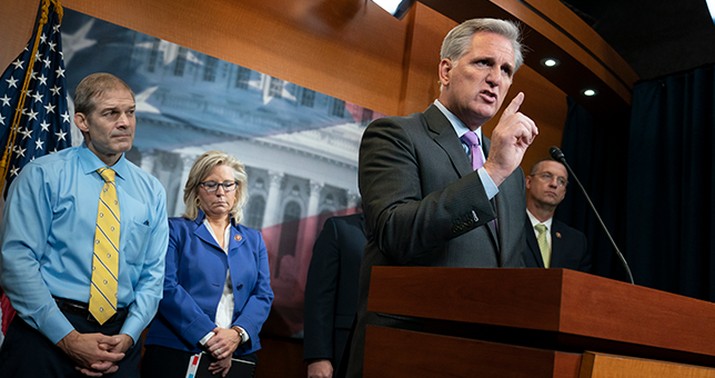 Given the final margin, it seems like she would have won the vote easily regardless. But multiple accounts of the House GOP meeting quote members as saying McCarthy really locked it down for her among fencesitters with his closing statement.

An impassioned plea for Cheney was only half the equation, though. He also defended (sort of) Marjorie Taylor Greene, which must have made it easier for the fencesitters to give Cheney a break. The theme of the evening was unity, a plea for Republicans not to turn on their own be they pre-Trump traditional conservatives like Cheney or post-Trump conspiratorial populists like Greene. Big tent! And the fact that it was clear before the vote that McCarthy wouldn’t move against Greene made it doubly hard for waverers to make an example of Cheney: The headlines after a meeting in which the crank was saved while the old-school Republican was sacrificed would have been vicious.

After a bit of throat clearing denouncing some of Greene’s past rhetoric, McCarthy effectively rallied his conference to her defense. “Never before in the history of Congress have we allowed the other party to dictate our committees,” he said, a reference to Democrats vowing to remove Greene from her committee posts if Republicans refused to. “If they come after her, they’ll come after someone else next.”

Many Republicans now plan to give Greene a chance. She received a standing ovation at the conference meeting after she disavowed many of her previous beliefs. She told a story about a dark point in her life when she apparently turned to QAnon, according to a person in the room. She said that was a mistake, walked back suggestions that 9/11 and school shootings were a hoax and apologized for how her past statements were affecting them all. After she spoke, even Rep. TOM REED (R-N.Y.), a leader of moderate Republicans, stood up to thank her for sharing her story and indicated he’d give her a chance.

McCarthy was so ardent in his defense of Greene that Adam Kinzinger reportedly got up at one point of the meeting and tore into him for being more supportive of Greene than of Cheney. (Presumably this was before McCarthy’s closing speech.) Tom Rice, one of the 10 Republicans who voted to impeach Trump, also lit into McCarthy for traveling to Mar-a-Lago recently to meet with Trump. But that only made McCarthy’s defense of Cheney last night more notable: According to the Dispatch, Trump and his children had been phoning House Republicans in the days before the meeting to lobby them to oust Cheney. The fact that she got two-thirds of the caucus anyway after McCarthy rallied them to her side is … interesting.

The fact that it was so lopsided is an inkling of how tired House Republicans are of the cult of Trumpism. It’s not fair to assume that all 145 who voted for her last night also would have voted to impeach if that vote had been held by secret ballot but surely a big chunk would have. What are we thinking? Half of that 145, maybe? More? Either way, it ended up being an almost unheard-of instance of Trumpist Republicans being humiliated by establishment ones, with centrists bathing in schadenfreude afterward. This clip of Cheney antagonist Matt Gaetz, recorded yesterday afternoon before the vote, was especially popular on social media last night:

No we voted. You were just wrong by like, a huuuuuge margin. https://t.co/2iwjlxpB3J

“No we voted,” tweeted Kinzinger at Gaetz afterward. “You were just wrong by like, a huuuuuge margin.” Cheney should celebrate by flying down to Florida tomorrow and holding a rally at the state capitol about how much Gaetz sucks.

But she won’t do that, and not just because it would be terrible form after a big “unity” vote in her favor. She won’t do it because she surely understands that last night’s victory was an inch deep. She won only because members of the caucus didn’t have to go on record with their support of her. And as Jonathan Last says, what kind of “victory” is that, really?

That’s the definition of weakness…

A party that is afraid of its voters is not sustainable. Either the voters will leave or the party institutions will transform to their liking.

The same poll found that 59 percent of Republicans — nearly two-thirds — said yes when they were asked if they’ve lost faith in democracy. Among those who identify with Greene, 70 percent said so. Cheney’s reward for winning last night is getting to remain for two more years as an unpopular leader of a party that’s radicalizing towards authoritarianism and conspiratorial illiberalism before being ousted by a majority in Wyoming who think Matt Gaetz is the sort of leader America needs more of. Winning occasional skirmishes is nice for the non-MAGA wing of the party but we all know who’s going to win the war.