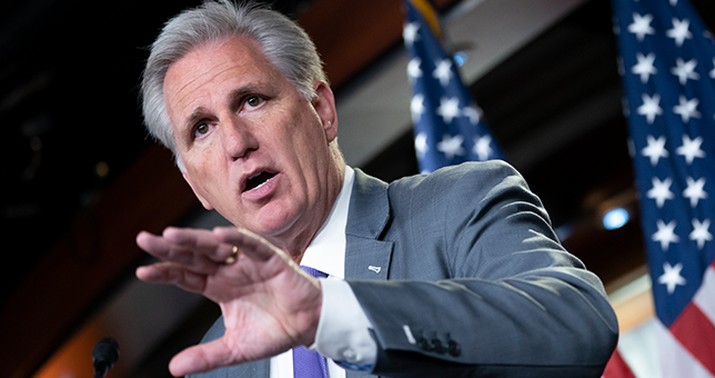 Today could get a wee bit awkward on Capitol Hill for House Republicans. The GOP caucus will take a vote this afternoon on whether to kick Liz Cheney from her leadership post for her vote to impeach Donald Trump. At the same time, the caucus’ steering committee will have to meet again to make a decision whether to take any action against Marjorie Taylor Greene, whose rantings about Jewish space lasers and school-shooting “hoaxes” has somehow not proven quite as embarrassing to the GOP.

Kevin McCarthy was supposed to deal with Greene last night, but ended up punting the issue, Politico reports this morning. “Punt” might be too strong a word yet, but the clock is ticking:

House Republicans have punted a decision on whether to strip Rep. Marjorie Taylor Greene of her committee assignments, despite huddling for over an hour Tuesday evening to discuss the controversial freshman’s fate, according to multiple GOP sources.

Minority Leader Kevin McCarthy — who is under increasing pressure to discipline the Georgia Republican for her past offensive and incendiary rhetoric — called an emergency late-night meeting in his office with the House GOP Steering Committee after he met face-to-face with Greene earlier in the evening.

But they made no final decision about how to proceed, and lawmakers headed home after the meeting wrapped-up for the evening. Greene was awarded seats last week on the House Education and Labor Committee, as well as the House Budget Committee.

The Steering panel may resume deliberations Wednesday — the same day the entire House GOP conference will be meeting to debate whether to oust Rep. Liz Cheney (R-Wyo.) from her leadership job after she voted to impeach Donald Trump.

McCarthy can’t punt for very long. Steny Hoyer has pushed for a floor vote to strip Greene of her committee assignments if Republicans don’t act. Republicans have threatened to go after Ilhan Omar in retaliation for her earlier anti-Semitic comments, which could start a tit-for-tat escalation that could set some ugly precedents. Hoyer recognizes that danger, but says this photo promoted by Greene in September might set that bar rather high:

Before January 6th, this might have just been in poor taste. After the Capitol riot, Greene’s photo with the rifle combined with her call for “fighters” comprised of “strong conservative Christians to go on the offense against these socialists” looks like something a bit worse than bad taste.

Hoyer is making it clear that he will take action by tomorrow if McCarthy doesn’t:

Hoyer tells Dems that McCarthy acted with "much less serious case with Steve King,” going on to describe that as “far less egregious and incendiary"

With that in mind, Politico’s Playbook reports this morning that McCarthy wants to cut a deal with Hoyer. What he doesn’t want is to have to defend Greene in a floor vote:

INSIDE MCCARTHY’S TENTATIVE PLAN TO DEAL WITH GREENE: During a two-hour meeting Tuesday night with Greene, McCarthy explained to the QAnon supporter that her controversial past statements were coming to a head. The problem, McCarthy told her: Democrats are threatening to force a vote to remove her from her committees — and that puts the entire GOP Conference in a bad spot. McCarthy tried to give Greene options, according to a person familiar with their talk: She could denounce QAnon and apologize publicly for espousing hurtful conspiracy theories and endorsing violence on Democrats. She could remove herself from the panel to spare her colleagues a vote on the matter. Or, she could face removal from her own GOP peers.

It must not have gone as well as McCarthy hoped, because he then called a late-night meeting with the panel that designates committee assignments to discuss removing Greene. According to our sources, the room agreed that a House vote on this issue would be catastrophic politically for their members who are already angry at being associated with Greene’s crazy statements. That must be avoided, they concurred.

McCarthy told the room he would speak with House Majority Leader STENY HOYER to try to broker a deal. McCarthy would offer to remove Greene from one committee — Education and Labor — if Democrats back off a House floor vote to remove her from both. (Greene also sits on the Budget Committee.)

It is unclear whether Hoyer will go for this. The pressure on Democratic leaders to do something drastic to punish Greene is only increasing. McCarthy’s members also talked about re-appointing Greene to another committee Tuesday night, but that will never fly with Democrats.

McCarthy’s playing a losing hand, so anything he gains with it would be miraculous. With Donald Trump all but certain to escape any further consequences for the January 6th attack on Congress, Greene has become the focus of House Democrats’ ire and desire for some retribution. He might mollify Hoyer by stripping Greene of her seat on Education, but the closer this comes to a floor action, the less likely Hoyer will be to deal. He’s raising expectations within his own caucus of a total rebuke for Greene, which some of Hoyer’s caucus members might still see as a compromise position to expulsion.

By the end of business today or tomorrow morning at the latest, McCarthy will have to make a choice. If his caucus strips Cheney of her leadership post while he does nothing with Greene, that will certainly be a choice, but it will provide Democrats with tons of material for the midterms. McCarthy better start working on his Monty Hall impersonation and hope Hoyer lets him off the hook.