If Republicans don’t remove Marjorie Taylor Greene, we must do it, says … Ilhan Omar 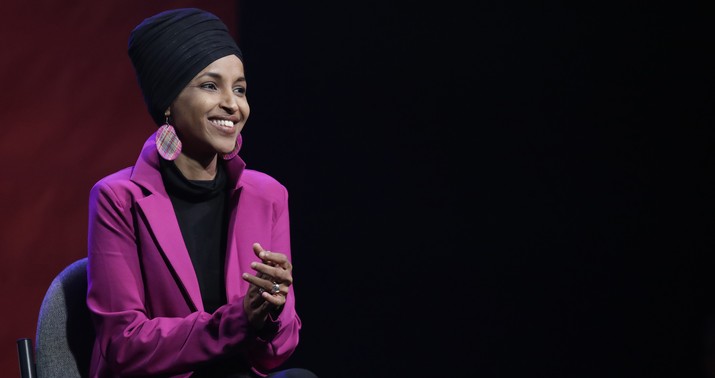 Via Mediaite, I’m straining mightily not to succumb to the temptation of a tu quoque here. That way lies ruin, after all. If the answer to Marjorie Taylor Greene being a crank is simply to say “Omar’s a crank too and Democrats tolerate her!” then we’re dooming ourselves to a Congress where crankery is acceptable so long as it’s bipartisan.

But, as a matter of basic political reality, if House Dems were to expel Greene for her extensive history of cringeworthy nuttiness, rest assured that the Republican base would demand a reprisal once the GOP is back in the majority. Annnnnd I’ve got a solid guess whom their chief target would be.

I’m not sure that what America needs now is a round of trash-talking between Marjorie Taylor Greene and Ilhan Omar, but here we are, here we are.

Greene has spent the last day or so disappearing some of her old social media comments from the Internet but here’s a newly rediscovered one that captured the imagination of the commentariat yesterday. Believing in QAnon and anti-gun provocateurs staging school shootings is, unfortunately, garden-variety amateur kookiness in 2021. Believing in secret Jewish space lasers being used to start forest fires is professional-level:

Just over two years ago, Greene suggested in a Facebook post that wildfires in California were not natural. Forests don’t just catch fire, you know. Rather, the blazes had been started by PG&E, in conjunction with the Rothschilds, using a space laser, in order to clear room for a high-speed rail project…

The Rothschild family has featured heavily in anti-Semitic conspiracy theories since at least the 19th century. Anti-Semites have generally updated the theory by replacing the Rothschilds with George Soros, a more contemporary and plausible-seeming mastermind for a global conspiracy to spread left-wing ideology. Greene’s version has instead updated the theory by giving the Rothschilds possession of a secret, powerful space laser.

Maybe she and Omar could find common ground over an anti-semitic conspiracy theory, though. The enemy of my enemy, etc.

The House Republican leadership saw all of this coming from a mile away and did nothing, as usual. If we’ve learned anything about the GOP in the past five years, it’s that they’re exceptionally good at underestimating a toxic populist in their ranks and then waiting too long to try to stop them:

[Steve] Scalise, [Liz] Cheney and [Mark] Walker gathered for the weekly meeting in the conference room of McCarthy’s office in the Capitol and plotted how they should deal with her.

Walker, now running for North Carolina’s open Senate seat in 2022, strenuously argued they needed to do more to stop this “crazy” woman who threatened to bring down the party, according to a source with direct knowledge.

Cheney (R-Wyo.) also spoke up aggressively in these meetings about the danger of having Greene in the party.

McCarthy ended up doing very little to help Greene’s Republican opponent win their House primary, possibly because both Mark Meadows and Jim Jordan went to bat for Greene. She had the Trump seal of approval by proxy and McCarthy reeeeally hates getting on the wrong side of Trump.

Maybe instead of pestering McCarthy for answers on Greene, the press should focus on Jordan and a now out-of-politics Meadows. Do they regret their support for her now? If not, why not?

Here’s the latest drama. Cori Bush is a left-wing Democrat and new member of “the Squad” who’s just starting her first term. She has a problem with Greene too:

A maskless Marjorie Taylor Greene & her staff berated me in a hallway. She targeted me & others on social media.

I'm moving my office away from hers for my team's safety.

I've called for the expulsion of members who incited the insurrection from Day 1. Bring H.Res 25 to a vote.

I don’t know any details about Bush being “berated” by Greene. But that could be important, as there’s a strong argument against McCarthy punishing Greene for her old Facebook comments:

Obviously the views expressed by Marjorie Taylor Greene have been repugnant, but I'm uneasy about expelling a member for past statements she made that were publicly available during the campaign. Voters decided to send her despite knowing her Qanon past, for instance.

If her Republican and Democratic opponents in the House primary failed to make the case against her using publicly available information, why should McCarthy penalize her for it now? If she did or said something objectionable to Bush after assuming office, that’s one thing, but we typically don’t go around usurping voters’ choices of their representatives based on old sins that the voters could have considered, and possibly did consider, in making that choice.

Which is what makes this week’s Greene saga compelling. It’s a case study following the Capitol riot of a severe and unusual problem that Washington Republicans are faced with, the fact that some small but meaningful percentage of the base has sunken deep into conspiracy theories and authoritarianism. The supreme example are the QAnoners who attacked lawmaker on January 6, believing that they’d extend Trump’s hold on power and trigger a “storm” of arrests and executions of Satanic Democratic child traffickers. If you’re McCarthy, what do you do with someone who got elected to Congress as a known fellow traveler of people like that? Do you take Klein’s view, that the voters are always right and it’s not for members of government to second-guess the people? Or do you take the view of Greene’s primary opponent, who said to Axios of the GOP that “at some point, you have to say, ‘No shoes, no shirt, no service'”? What role does the party as an institution have to police its own voters’ preferences if its voters start electing cranks?

None, we might say. In a democracy, the people are entitled to get the representation they want. Here’s what Georgia Republicans wanted, I guess.

In early 2019, conspiracy theorists claimed that Ruth Bader Ginsburg didn't appear at an airport and was actually replaced by a body double.

Rep. Marjorie Taylor Greene, whose GOP colleagues have given her committee assignments, was one of those people. https://t.co/nsKvla8m9R pic.twitter.com/NBsVjyr0Sz