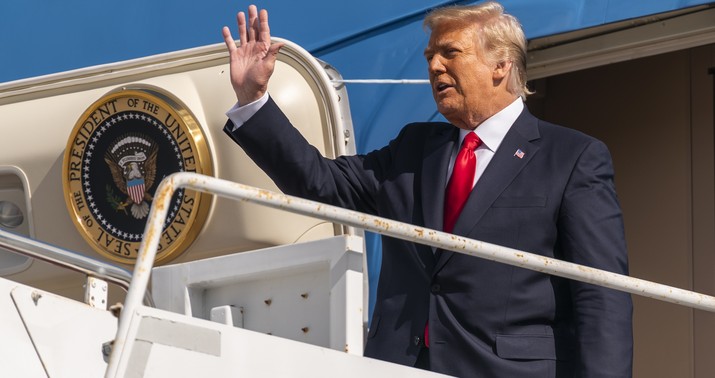 Newsy, just because everyone (including me) assumed that this afternoon’s vote on Rand Paul’s point of order meant that there were no more than five Republicans at most who’d ultimately vote to convict. After all, anyone who joined Paul in alleging that the trial was unconstitutional because Trump is no longer in office couldn’t rightly vote against him at the end of the trial, could they?

How can you convict a man after a proceeding which you believe you have no legal authority to conduct?

Now here comes Portman, who announced yesterday that he’ll retire after 2022, to say that he wasn’t making a judgment about the constitutionality of the trial by joining Paul today. He just wanted to, you know, talk about it on the Senate floor. Hear both sides. Democrats made that impossible by blocking Paul, but Portman’s vote to convict is still theoretically in play.

That seems too clever by half, especially for a senator who no longer has to fear the wrath of the voters. But it’ll be nice, I suppose, if we can eventually say that all but six Senate Republicans let Trump off scot-free after a months-long coup attempt and murderous attack on the Capitol instead of five.

Paul didn’t want to hear any of it afterward:

“If you voted that it was unconstitutional then how in the world would you ever hope to convict somebody for this?” Paul asked, adding ,”45 of us, almost the entire caucus, 95% of the caucus, voted that the whole proceeding was unconstitutional. This is a big victory for us. Democrats can beat this partisan horse as long as they want — this vote indicates it’s over, the trial is all over.”

Trump will be acquitted for sure but Portman’s logic leaves some suspense in the mix about how many Republican votes to convict there’ll end up being. The most shocking pro-Trump vote this afternoon came from Mitch McConnell, who hasn’t spoken to Trump in more than a month, passionately opposed the effort to object to Congress’s certification of Biden’s victory, and was reportedly “pleased” that Trump had been impeached over the Capitol riot and was considering voting to convict. Today he farted all of that away by voting with Paul. Or did he? More from Portman:

“I want to hear it debated,” Portman told reporters. “The vote to table is inconsistent with that, you know, but I’ve not made my mind up. I’m a juror. And I mean I’ve the same position Mitch McConnell has. He didn’t do that to be tabled either, even though he wants to have, you know, a fulsome discussion.”

Is Cocaine Mitch also still open to convicting? Maybe he’s trying to be cute with his votes, tossing the MAGA side of the base some red meat by joining Paul’s objection today before he votes his conscience to convict on the final verdict. He just won reelection and is likely in his final term in the Senate. There’s nothing Trump can do to him at this point if he votes to convict, although of course the former president could back primary challenges to McConnell-supported establishment candidates in 2022 as revenge.

It could be that Cocaine Mitch’s vote is still in play. If he knows that Trump will be acquitted easily, he might reason that it’s worth lending his moral authority as caucus leader to the anti-Trump position just to throw a bone to anti-Trump swing voters. That’d be his way of signaling to them before the midterms that there’s room for them in the party even if most of the GOP is MAGA. That’s also why Kevin McCarthy wants to keep Liz Cheney around in leadership, I assume: He and McConnell are eager for ways to show the gettable voters who supported Biden in November that the party isn’t wholly owned by Trump even though, let’s face it, it is.

As for the Paul argument that it’s too late to try Trump now, both parties bear blame for enabling it. Pelosi sat on the impeachment vote for a full week after the attack on the Capitol, inexplicably holding out hope that Mike Pence would invoke the 25th Amendment against Trump in the interim. If she had moved to impeach the day after the riot and delivered the article to the Senate on the day following, the Senate would have had Trump’s fate in their hands 12 days before he became a private citizen. But the GOP also dragged its feet, notes Jonathan Chait: “Before the election, it was too soon to convict him. Then there was a brief lame-duck period when it was neither too soon nor too late, but Republicans decided not to convene. Then they came back, and it was too late.” Right, Republicans could have granted unanimous consent to start the trial process during the pro forma session on January 15, when Trump was still in office, but they declined. They helped slow-walk the trial, and now conveniently they’ve concluded that they no longer have jurisdiction.

You know what the worst part is? They don’t even have the stones to defend Trump on the merits. No one’s out there in the Senate as far as I know insisting that what he did wasn’t incitement, or that the “stop the steal” campaign was fine. They’re all hiding behind the fig leaf that the Constitution simply denies them the opportunity to hear this case, gosh darn it. Trump’s probably sorry in hindsight that he wasn’t more explicit in calling for the mob to f*** Congress up. He must be looking at this craven display now and thinking, “I could have told them to burn down the Capitol and I’d still be acquitted.” Increasingly it seems to me that a major, deadly flaw in the Constitution was the Founders’ assumption that each branch would jealously guard its powers and prerogatives from encroachment by the others. In a better world that’d be true, but in a world where one party’s base craves executive authoritarianism, that preference is bound to be reflected in their elected representatives in the legislature. That’s where we are now. Think what you want about Senate Republicans going into the tank for Trump, but don’t accuse them of declining to fairly represent their constituents’ wishes.