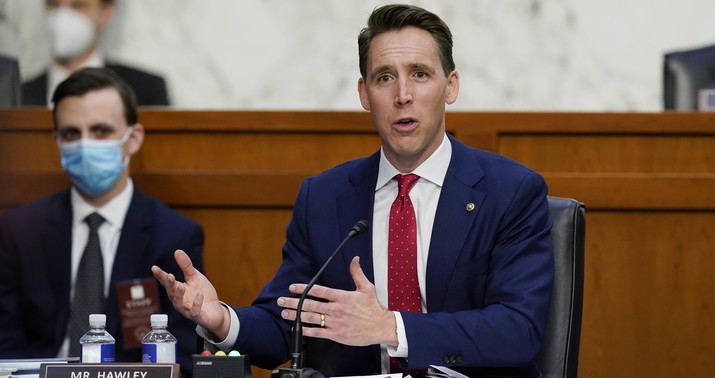 Does he mean the precedent of impeaching presidents who’ve already left office?

Because it’s really, really, really hard to see how that would be dangerous, let alone likely. In fact, there’s no less dangerous instance of impeachment than that one.

HAWLEY: "I think ex-president's rhetoric on the day was inflammatory. I think it was irresponsible. I think it was wrong. But I think that this impeachment effort is, I mean, I think it's blatantly unconstitutional. It's a really really, really dangerous precedent."

Which ex-presidents is Hawley afraid of seeing impeached retroactively? If he means recent ones like George W. Bush, it seems weird that Dems never got around to impeaching him even while he was in office despite the fact that he was detested by the the left for having launched the Iraq war. They could have impeached him in 2007, while he was still president, after Democrats had retaken the House. Or they could have could impeached him retroactively in 2009, after Obama had been inaugurated and Democrats enjoyed total control of government.

Why didn’t they? Why not stigmatize the Bushitler as the first ex-president ever to be impeached and convicted? Here’s a theory: They had nothing to gain by doing it and they knew it. Even with their big advantage in the Senate at the time, they never would have gotten 67 votes to convict. If there’s any lesson to be gleaned from the past year, it’s that in a hyperpartisan age there’s nothing a president can do to get a meaningful number of senators from his own party to vote to remove him. It wasn’t even three weeks ago that Trump incited a riot that could easily have resulted in members of Congress and his own VP being murdered in the Capitol and yet we’ll be lucky if there are five Republican votes against him at the end of the trial.

If it’s that hard to get a conviction for a freshly committed crime, imagine Democrats trying to convict Bush in 2009 for something he did in 2003. You can imagine the arguments against it as easily as I can. “Why didn’t you do this in 2007?” “Haven’t we already litigated these issues at the ballot box several times?” “We have many more important things to do in Congress than take revenge on people who aren’t even in politics anymore.”

But let’s say Democrats were unswayed by all of that. And let’s assume further that they were undeterred by the fact that they had no hope of getting 67 votes in the Senate to remove. At the end of the day, what incentive would they have to follow through on impeachment even if they foolishly and wrongly believed they could get a conviction? All two-term presidents are barred from running for president again by the 22nd Amendment anyway. And apart from Trump, who’s a singular figure because of the intense cult of personality that surrounds him, one-term presidents are always regarded as washed up because they’ve proven themselves capable of losing a national election.

So what “really, really, really dangerous precedent” would be set by letting Congress try to impeach and disqualify ex-presidents? Unless Dems in 2009 were worried that Bush was going to try to run for Senate or something after his presidency, there’d have been no point to the effort. On the contrary, had they prioritized the impeachment of an official who’d left office months or years before over the pressing business of national governance, they’d have alienated more voters than they would have impressed by signaling their unseriousness as a party.

The politics would get even more toxic if they moved to impeach and convict some long-dead president. I assume the parade of horribles Hawley wants MAGA types to imagine is the woke left trying to convict George Washington of slave-holding, but there’s simply no way the bulk of Democrats in Congress would ride along on an effort like that. They just got a hard lesson in House and Senate races about what happens when they let progressives set the messaging on matters like defunding the police. A completely gratuitous impeachment of some Founding Father like Washington or Jefferson who’s revered by 80 percent of the country would be the political equivalent of Dems punching themselves in the balls. They’re welcome to try it. But even they’re not so stupid as to gift-wrap a talking point like that for the GOP.

And if they did, how many Senate votes do you think they’d get? Hint: Not 67.

Again, then: What’s the “really, really, really dangerous precedent” here? What specific circumstances is Hawley imagining in which Congress comes after an ex-president *and* has a realistic chance of getting 67 votes in the Senate to convict and disqualify them from office?

There are none. There’s nothing “dangerous” about this. The only case where it makes sense politically to go after a former official is the one we’re facing right now, in which a president engages in a gross abuse of power right before leaving office (or resigning) and the clock runs out on him before Congress can act. In a situation like that, we don’t want to let him evade accountability just because Congress can’t move as quickly as the hands on the clock can. This isn’t even a case of the House having sat on its hands and waited until Trump left office before getting around to impeaching him, as would be true in the hypothetical in which Bush gets impeached in 2009. The House *did* act while Trump was still president. Now it’s left to the Senate to simply complete the constitutional process that began during Trump’s presidency by judging him on the merits.

If you want a really, really, really dangerous precedent, here’s one: Do nothing. Let Trump skate away scot-free in this instance on bullsh*t jurisdictional grounds just because he ended up as an ex-president before the impeachment process was finished. It’d be bad if the Senate GOP went through with this trial and acquitted him on the merits, as it would mean they’d found him not guilty of obvious incitement — but we can all live with that precedent since it’s not very likely that a future president will go around inciting mobs. It would be really bad, though, if instead the Senate GOP followed Rand Paul’s lead and acquitted him on the theory that a president who’s left office can’t properly be tried. That would be an invitation to future presidents to abuse their power freely in their final weeks, even if they don’t end up abusing it to the extent of inciting violence against their political enemies.

Long story short: Hawley’s grasping for some fake-principled reason to vote against convicting Trump because he knows Trump’s guilty as sin on the merits and so he’s decided to cling to the jurisdictional issue disingenuously. That’s all there is to it.