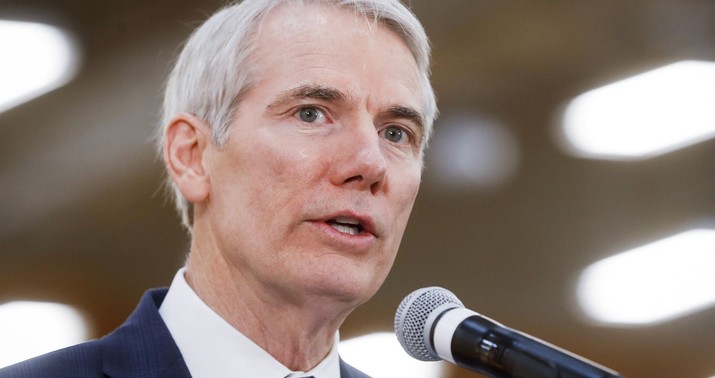 The good news is that Ohio is now a solidly red state, choosing Trump by an even wider margin last November than Texas did. That makes the GOP a strong favorite to hold this seat in a midterm with a Democrat in the White House.

The bad news is that it’s still purple enough to have comfortably reelected far-left Sherrod Brown to the Senate three years ago. And because the GOP is the GOP, it’s possible if not likely that Republican primary voters will choose their weakest option in the field to replace Portman — ahem — which would give Dems a fighting chance of stealing this one.

Anyway, I’m mighty eager to see how liberated Portman ends up being by this announcement. Pat Toomey announced a few months ago that he won’t run for reelection either and ever since he’s been one of the sharpest Trump critics in the Senate, a likely vote to convict at the upcoming impeachment trial. Nothing’s stopping Portman from voting to convict now too, or to partner with Biden on policy initiatives that are mutually agreeable to them. From his retirement statement:

I don’t think any Senate office has been more successful in getting things done, but honestly, it has gotten harder and harder to break through the partisan gridlock and make progress on substantive policy, and that has contributed to my decision.

We live in an increasingly polarized country where members of both parties are being pushed further to the right and further to the left, and that means too few people who are actively looking to find common ground. This is not a new phenomenon, of course, but a problem that has gotten worse over the past few decades.

This is a tough time to be in public service.

“You can disagree with his views and still think Portman retiring is a bad sign for the GOP and American politics. Because it suggests a sober legislator is pessimistic about what his party and American politics are going to be like for some time,” tweeted Jake Tapper. That’s correct. In a vacuum, the current circumstances couldn’t be more conducive to bipartisan compromise in Congress. The Senate is 50/50, there’s a moderate in the White House, and the grinding crisis driven by the pandemic invites creative solutions. Instead Portman’s throwing in the towel at the relatively tender age of 65. He could have had three more terms easily if he’d wanted them. He didn’t. There were too many unserious ideologues to try to do business with to justify the aggravation.

As for successors, I know what you’re thinking and you can rest easy. Kasich is a no:

.@JohnKasich will NOT run for U.S. Senate, spokesman confirms. https://t.co/698rUtE8KA

He’d be dead on arrival in a Republican primary after having endorsed Biden. But if Kasich is out of the picture, pretty much every other Republican in Ohio is in it. Read this for a nonexhaustive list. There are former Senate candidates Josh Mandel and Jim Renacci; there’s Gov. Mike DeWine, who’s term-limited; there’s “Hillbilly Elegy” author J.D. Vance, whom the GOP once tried to recruit; and of course there’s Jim Jordan, the Trumpiest candidate of the lot by far. Trump himself could presumably settle the matter by endorsing Jordan, which I assume he’d do. The question is who the McConnell-backed candidate in the primary would be and what chance they’d stand against a Trump-supported Jordan, even with McConnell raising big bucks for his guy.

A Trump/Mitch proxy fight in the Ohio primary for the soul of the party would be a sweet subplot to the Republican civil war that’s developing, and which will reach its hottest stage in 2022. Replacing an earnest legislator like Portman with a performance artist like Jordan would be extremely on-brand for the GOP of this era, which is why I’d put my money on MAGA to win that fight. And Jordan’s *probably* not so polarizing that he’d fumble away the seat in a general election after Trump himself won the state by eight points a few months ago.

Maybe the biggest challenge for Jordan is deciding whether he wants Portman’s seat or DeWine’s. I assume Portman’s, since governors actually have to govern. Senators nowadays mostly just spend their time grandstanding, which is right up his alley. And of course is why Portman wants out.

Better hope that he’s the last Republican incumbent who parachutes out, as the number of seats that need defending is piling up:

Republicans will really want to make sure that Blunt, Grassley and RonJohn run again. Imagine six open Senate races in Iowa, N.C., Pa., Mo., Wis. and Ohio — would be tough.

I think Blunt and Johnson will hang in there but Grassley will be 89 years old on Election Day 2022.

One other thing about Portman. As recently as November, he was telling people he’d run again two years from now. Maybe that was just him keeping his cards close to the vest, having already privately decided that he’d retire, but I can easily imagine him thinking he’d run again and then watching the “stop the steal” fiasco and the attack on the Capitol on January 6 and deciding, “Nope. Not for me anymore.” I get the sense from some non-Trumpy senators like Marco Rubio and Ben Sasse that they feel a certain duty to try to hold onto their seats in the name of keeping those seats out of MAGA hands until this Jacobin era on the right ends. After all, if they quit now, it’s highly likely that they’d be replaced in the Senate by either a hardcore MAGA type or a Democrat, both of which are bad outcomes for different reasons. That logic is self-serving since it conveniently gives them a “principled” or “patriotic” excuse to continue to pursue their personal ambition and cling to power, but there’s some truth to it — it may well be that the party realistically can’t do better than Rubio in Florida. The same is likely true for Portman in Ohio, and yet Portman doesn’t seem to subscribe to Rubio logic. He took a look around at the state of the party and ran for the escape hatch. We’ll probably end up with Sen. Jim Jordan as a result. Thanks, Rob!