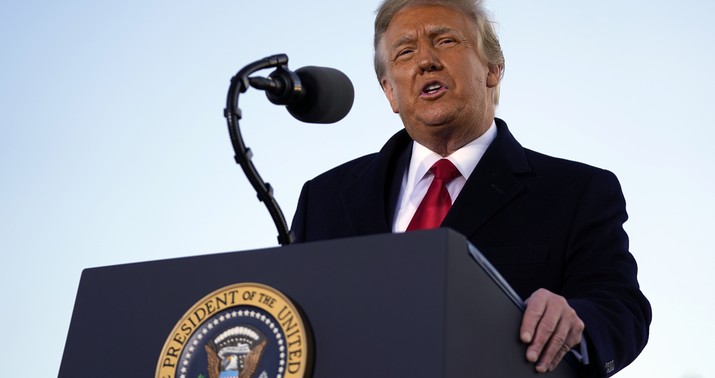 Funniest news story you’ll read all day. Imagine thinking these power-mad nihilists could be convinced to do the right thing instead of the self-interested thing.

The reason there’s a lobbying effort to begin with is that a meaningful number of tapped-in Republicans fear — correctly — that Trump is still viable in 2024, in spite of everything. In a sane world, the two-month “stop the steal” spectacle that led to the Capitol riot would have rendered him so politically radioactive that the impeachment trial would be meaningless. It wouldn’t matter if the Senate convicts him and formally disqualifies him from office or not. The electorate would have already informally disqualified him.

But no one believes he’s DOA in a Republican primary. To the contrary, it’s very possible that he still has enough juice to clear the field of challengers (Larry Hogan doesn’t count) if he were to make plain his interest in running again. That’s why anti-Trumpers in Washington are twisting arms to get McConnell to convict. They know their base is perfectly willing to renominate a guy who incited a mob that broke into the Capitol in hopes of hanging his own vice president.

The question for McConnell and his caucus is what sort of backlash taking that step might unleash.

As the House prepares to send articles of impeachment to the Senate on Monday, CNN has learned that dozens of influential Republicans around Washington — including former top Trump administration officials — have been quietly lobbying GOP members of Congress to impeach and convict Donald Trump. The effort is not coordinated but reflects a wider battle inside the GOP between those loyal to Trump and those who want to sever ties and ensure he can never run for President again…

The ongoing Republican whisper campaign, according to more than a dozen sources who spoke to CNN, is based on a shared belief that a successful conviction is critical for the future of the Republican party. Multiple sources describe this moment as a reckoning for the party.

“Trump created a cult of personality that is hard to dismantle,” said a former senior Republican official. “Conviction could do that.”

“Mitch said to me he wants Trump gone,” one GOP member of Congress told CNN. Okay, but at what price? Contra CNN’s source, disqualifying Trump from office wouldn’t “dismantle” his personality cult. It’s precisely because personality cults don’t dissolve easily that some Republicans think the only solution is to bar him from running again:

Holding hands and jumping on an impeachment conviction your voters don't want is a pretty explicit bet as to his resiliency. And conversely if you expect the fever to break, you don't need to bar him! This isn't hard.

You can’t dismantle his cult so the next best thing is to keep him off a national ballot. But that comes with a price. Some of his fans will kiss off the GOP forever in protest, imperiling the party in general elections. Primary challenges will be organized against any Republican who votes to convict, probably with even greater intensity than the ongoing effort to punish Liz Cheney. Barring Trump may not even solve the basic problem of keeping a Trump off the ticket: It’s conceivable that Don Jr would run for president in 2024 instead and race to the nomination by telling his father’s voters to spite the GOP establishment by sending another Trump to the White House.

Meanwhile, it’s possible if not likely that Trump will fade away on his own if he’s acquitted. He doesn’t have Facebook or Twitter anymore. He’s getting older. He really has lost some support among “soft” Trump voters since the Capitol attack, which, if durable, would mean he’s probably unelectable in the general election. Having lost the popular vote twice, once to a deeply unpopular opponent in Hillary Clinton, Trump may have trouble convincing those soft supporters to roll the dice on him again as a likely winner next time.

In fact, other Republicans associated with the “stop the steal” push who don’t have fan bases as ardent as Trump are already in some political trouble:

Ted Cruz, the other lead objector to Biden’s certification in the Senate, saw his approval fall from 49/38 in Texas in November to 45/44 now.

Point being, McConnell’s probably looking at all of this and thinking that he and the party stand to gain more by sticking with Trump one last time than by antagonizing him. If they acquit him, it’ll drain some of the energy out of the push among MAGA fans to primary establishment Republicans in 2022. A unified base is a necessary precondition to taking back the Senate and the House. And Trump may well be too old and tired in 2024 to think about running again anyway, despite his remaining eligibility. Whereas if they convict him, it’s a formal divorce from whatever the percentage is of Republicans whose loyalty first and foremost is to him rather than the party — and that’s a meaningful percentage. “I have learned through sad experience that no one has lost money betting on the seemingly bottomless capacity of congressional R’s for self-abasement and cowardice,” said one former Republican official to CNN. Combine self-abasement and cowardice and a self-interested belief that the party will prosper by letting Trump slide one last time so as to appease his fans and you have a recipe for something like five Republican votes in the Senate to convict. Maybe a few more depending on how the trial goes. Certainly nothing like 17.

In lieu of an exit question, here are two old quotes that are circulating online today. The Senate GOP has embraced the theory that they can’t vote to convict Trump because they lack jurisdiction to do so under the Constitution. He’s no longer in office, and you can’t impeach someone who’s no longer in office, right? Right?

You actually can impeach a former President, FWIW

“We should impeach him for that. Why aren’t we impeaching him?” — Trump suggests Republican should impeach former President Obama for his comments about health care pic.twitter.com/hioytOMlab