Confimed: Biden to immediately seek eight-year path to citizenship for millions of illegals, not just DREAMers 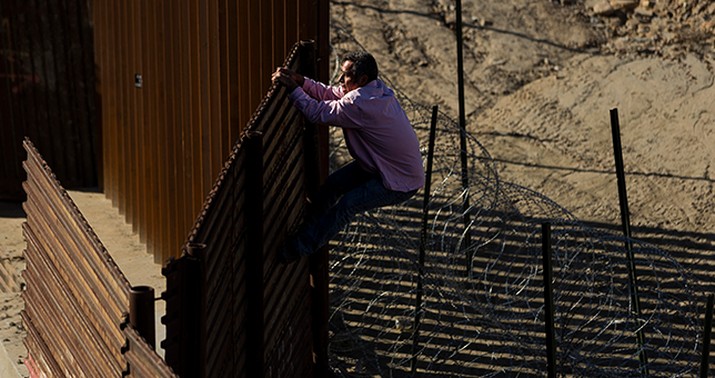 Ed wrote about this a few days ago, citing the LA Times, and now here’s the AP confirming it. The substance of the policy is uninteresting in that it’s obviously going nowhere. They’ll need 60 votes to pass it, which means 10 Republicans when they’re unlikely to find more than two. Even if the Dems used some procedural chicanery to try to pass it with 50 votes via reconciliation, a process that’s only supposed to be used for budgetary matters, how do you get Kyrsten Sinema or Mark Kelly or especially Joe Manchin to go for that?

*Maybe* Sinema and Kelly are sufficiently committed liberals that they’d roll the dice despite the fact that they represent a border state that’s traditionally voted Republican. But Manchin? Knowing that his constituents just handed Trump a 39-point win over Biden two months ago?

Ain’t happening, and Sleepy Joe knows it. So the interesting part here isn’t what Biden’s bill would do, since it’s not going to pass, it’s why he’s offering it at all. What’s the motive?

Under the legislation, those living in the U.S. as of Jan. 1, 2021, without legal status would have a five-year path to temporary legal status, or a green card, if they pass background checks, pay taxes and fulfill other basic requirements. From there, it’s a three-year path to naturalization, if they decide to pursue citizenship.

For some immigrants, the process would be quicker. So-called Dreamers, the young people who arrived in the U.S. illegally as children, as well as agricultural workers and people under temporary protective status could qualify more immediately for green cards if they are working, are in school or meet other requirements…

[I]t does not include a robust border security element, but rather calls for coming up with strategies. Nor does it create any new guest worker or other visa programs.

It does address some of the root causes of migration from Central America to the United States, and provides grants for workforce development and English language learning.

They’re not even making a gesture towards increased border security to try to sweeten the pot for GOPers? They know that the filibuster hasn’t actually been repealed (yet), right?

Maybe that’s the goal here — they want to put pressure on Manchin and Sinema, etc, to consider ending the filibuster by forcing a vote that’s apt to split sharply along partisan lines, giving Biden reason to complain that Senate Republicans are already roadblocking his agenda. Except I doubt there’s anything that could convince Manchin to do that given the political reality of representing West Virginia. And if he were to consider it, Dems would be better off with an issue that’s extremely popular and near and dear to his heart. The obvious example would be universal background checks for gun sales, which Manchin and Pat Toomey have attempted to regulate once before. Force a vote on that up front and let it be blocked by, say, 47 Republican votes and then maybe Manchin will rethink his opposition to ending the filibuster. What reason is there to believe he’ll rethink it in order to pass a mass amnesty?

Another possibility is that Biden wants to push this right out of the gate because he knows that he struggled with Latino voters against Trump on Election Day. The wrinkle in that theory is that there’s no reason to think mass amnesty is the ticket to Latino voters’ hearts. On the contrary, Trump’s inroads with them suggests that you can be ardently anti-illegal-immigration — or, really, anti-immigration, period — and compete seriously for Latinos. Remember that the scene of Trump’s biggest gains over his 2016 vote totals was in the illegal entry hot spot of Texas’s border country, where he improved massively against Biden over the numbers he pulled against Hillary Clinton. Post-election, it’s much easier to argue that Dems should rethink their “all amnesty, all the time” approach to winning over Latinos than that they should fart out a bill like the one Biden’s pushing. So, again, why’s he pushing it?

Even weirder, given his oft-repeated belief that Senate Republicans will work with him, you would think Biden would want to emphasize bills during his first 100 days that seem like fertile ground for bipartisanship. A COVID package is an obvious example, but pushing infrastructure is also something that might get the less spending-focused members of the GOP caucus like Hawley, Rubio, and Cotton interested. Insisting on a big immigration fight up front instead is apt to harden the resolve of the GOP base to resist everything Biden wants to do, which will make it harder for Hawley et al. to do business with him when infrastructure does finally come to the floor. Maybe there’s some “three-dimensional chess” explanation in which Biden thinks he can break the resolve of McConnell’s caucus by forcing them to have a fight internally over this bill, but … there just won’t be much of a fight. Conceivably he could get Collins and Murkowski to support it. Who else?

The most plausible theory I can come up with is that it’s an opening bid. He knows the bill has no chance of passing but it’s not supposed to pass. It’s just a Democratic wish list, which is why they didn’t even bother proposing any border security provisions. They’re going to let McConnell counter on that and specify which provisions of the bill are total dealbreakers for Republicans. Could Cocaine Mitch possibly negotiate him down to an amnesty exclusively for DREAMers with some new border enforcement mechanisms thrown in? That always seemed like a fruitful area for potential compromise during the Trump years — DREAMers in exchange for full wall funding — but it never quite came off. Maybe that’s Sleepy Joe’s plan now. He’s going to ask for the moon, let the GOP counteroffer, and then hope to reach some compromise on legalizing DREAMers.

And if that happens, then Biden can try to use it as a jumping-off point for bipartisan deals on other matters like infrastructure. “See what we can do when we work together? This is how Washington is supposed to operate! Both sides give a little.”

There’s one other reason Biden might want to force this issue early. It’s not just that amnesty is a gesture of thanks to the left, to show them that he’s serious about their agenda. It’s recognition that amnesty, for all its faults, is actually popular among Americans:

A Fox News poll taken in September 2017, eight months after Trump assumed office, found 83 percent in favor of a path to citizenship. That fact isn’t going to soften Senate Republican opposition since GOPers in Congress fear their base more than they do swing voters, but maneuvering McConnell and his caucus into an unpopular stance on an early initiative might be part of a long-term play by Biden to weaken support for the filibuster by emphasizing broadly popular bills. Manchin’s not going to nuke it just because Republicans block Biden on this one, but if they block him on this and universal background checks and infrastructure and other stuff with wide popular support, then the pressure begins to mount.

Exit question: Could this bill even pass the House? There are still a few red-district Dems like Elissa Slotkin and Abigail Spanberger whom Pelosi needs to worry about. If a mere six of them choose to vote no, the bill’s DOA.