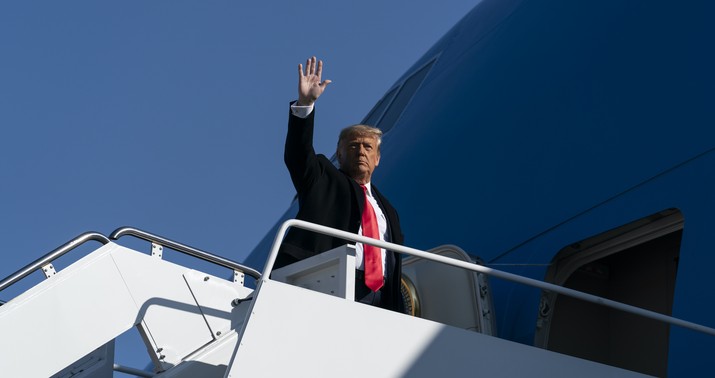 Only a fool would put their faith in a single poll’s measure of Trump’s popularity after the election we just endured, so don’t. Don’t believe that his approval has dropped all the way to 29 percent, especially since this is the only survey taken in his entire presidency that shows him below 30. Do feel free to assume that, in reality, he’s at least five points more popular among Americans than the bulk of the polling indicates.

But do note that poll after poll this week shows that he’s taken a sizable hit to his support following the Capitol riot. He once said that he could shoot someone on Fifth Avenue and not lose a single vote, a proposition that remains untested. What we now know conclusively, though, is that he will lose support if a crazed mob of his fans ransacks the U.S. Capitol and kills a cop in order to “stop the steal.”

An ominous possibility for Trump and the prospects of Trumpism is that Pew’s new poll has him below 30 not because it’s an outlier but because he’s in free fall. Earlier polls this week may not have fully captured the still developing backlash to the Capitol attack as well as Pew’s new poll has.

You can see from that graph that Pew has traditionally polled Trump a bit lower than the competition has. They had him at 38 percent or thereabouts for years, with only occasional deviations. The president’s average job approval in other polling was traditionally around 43 percent. If Pew is lowballing him by five points, then we’d expect other pollsters right now to have him at around 34 percent approval. And that is what we see: Ipsos, Morning Consult, and Quinnipiac all have him in the 33-35 percent range now. But, importantly, those are all low numbers for each pollster relative to their typical baselines for Trump. There’s no way to know what his “real” approval rating is right now but there’s no question that it’s fallen sharply:

Follow the link and scroll through FiveThirtyEight’s table of recent polls. With few exceptions, Trump’s topping out at around 38 percent, conspicuously lower than his historical average. He’s lost support.

The momentous question is whether he’ll continue to lose it or whether we’ve now reached the bedrock of people who won’t desert him even after a Fifth Avenue shooting. I was reading this story when the Pew poll was published this morning and came away wondering whether his decline might be due to a growing number of people realizing just how sinister the Capitol attack was. It wasn’t just the “QAnon Shaman” standing around posing for selfies. Mike Pence is lucky to be alive:

Secret Service officers eventually spirited Pence to a room off the Senate floor with his wife and daughter after rioters began to pour into the Capitol, many loudly denouncing the vice president as a traitor as they marched through the first floor below the Senate chamber.

About one minute after Pence was hustled out of the chamber, a group charged up the stairs to a second-floor landing in the Senate, chasing a Capitol Police officer who drew them away from the Senate.

Pence and his family had just ducked into a hideaway less than 100 feet from that landing, according to three people familiar with his whereabouts, who spoke on the condition of anonymity because of the sensitivity of the situation. If the pro-Trump mob had arrived seconds earlier, they would have been in eyesight of the vice president as he was rushed across a reception hall into the office.

Some were chanting “Hang Mike Pence” as they entered the building. If they had caught up to the Pence family, conceivably his wife and daughter would be dead now too. Even the “innocuous” figures in the building weren’t so innocuous, it turns out: Jacob Chansley, the “Shaman,” left a note on the desk in the Senate chamber that Pence was using that day. It read, “It’s only a matter of time, justice is coming.”

Americans are reading stuff like that and watching the videos of rioters beating cops and, well, you can see the trendline for yourself.

If, after all that, you’re inclined to say, “I don’t care about polls,” okay. But the Senate Republicans charged with deciding whether to convict him at his impeachment trial do and they’ll care a lot about one that has him at 29 percent. Pew finds that just 23 percent say Trump’s conduct since Election Day has been good or excellent; even among his own voters, 48 percent say it’s been only fair or poor. Here’s one that McConnell and his caucus will be chewing on for days:

It’s the traditional Trump-era GOP conundrum. Most of the country wants him gone. Even a sizable part of the GOP wants him gone. But a majority wants him to be a “major” figure for “many years” to come. What do you do with a president who’s sitting mid-30s in approval on his way out the door and who may yet sink further if his more extreme fans resort to new violence? Do you repudiate him by disqualifying him from future office when given the chance or do you tie yourself to him and accept all of the consequences that may flow from that? Bear in mind, this same poll found that 70 percent of Republicans still believe there was “widespread fraud” during the election.

But it also shows that a majority of GOPers, 52 percent, think Trump bears at least some responsibility for the riot. Among the total population, 75 percent say so.

Ironically, there’s a case that today’s poll will make it *less* likely that the Senate GOP will convict him. The only thing that’s really at stake at the trial is whether Trump should be barred from running again in 2024, and the only reason to bar him would be if Republicans fear that he might win the nomination again if he runs. The worse his polling gets, the less they need to worry about him being a viable contender. If he announces he’s running, the stain of the “stop the steal” fallout might convince some righties who’d otherwise be open to supporting him that he’s DOA in the general election and they need to look elsewhere.

I think the takeaway is as simple as this: Like the country itself, Trump is in a precarious place. The more violence there is, the worse it is for everyone.