Murkowski: Trump should resign — and this might not be the party for me anymore 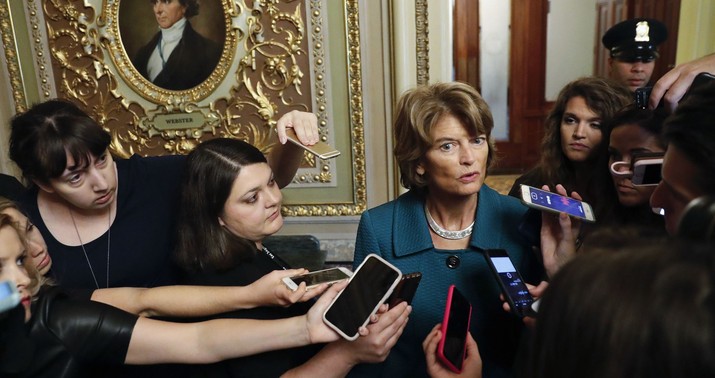 This would have been more of a bombshell if Republicans had held at least one of the two seats in Georgia, obviously, as that would have put control of the Senate in Murkowski’s hands. Still, having her quit the GOP would be useful to Dems. If Murky starts caucusing with Schumer, that takes some of the pressure off of Joe Manchin on big votes.

What I’m wondering: Is this Murkowski’s way of twisting Republican arms on impeachment and removal? I.e. a “get rid of him or I’m a Democrat-aligned independent on January 20”?

“I want him to resign. I want him out. He has caused enough damage,” Murkowski said during a 17-minute interview from her small Capitol office, steps away from the Senate chambers that were invaded by pro-Trump rioters on Wednesday.

“I think he should leave. He said he’s not going to show up. He’s not going to appear at the at the inauguration. He hasn’t been focused on what is going on with COVID. He’s either been golfing or he’s been inside the Oval Office fuming and throwing every single person who has been loyal and faithful to him under the bus, starting with the vice president. He doesn’t want to stay there. He only wants to stay there for the title. He only wants to stay there for his ego. He needs to get out. He needs to do the good thing, but I don’t think he’s capable of doing a good thing,” she said.

Well … yes. All of that is correct.

Asked whether she intends to remain a Republican, Murkowski said that depends on the party itself.

“Well, you know, there’s a lot of people who actually thought that I did that in 2010, think that I became an independent. I didn’t have any reason to leave my party in 2010. I was a Republican who ran a write-in campaign and I was successful. But I will tell you, if the Republican Party has become nothing more than the party of Trump, I sincerely question whether this is the party for me,” she said.

In five years, I believe that’s the first time I’ve heard a congressional Republican say that. Not even Romney has gone quite that far.

She went on to say that she had a call scheduled this afternoon with Manchin and “a bipartisan group of colleagues that are really concerned about about where we are, and how we move forward,” which sounds like the makings of a centrist mini-caucus. You can imagine the members: Her, Manchin, Susan Collins, Romney, maybe Kyrsten Sinema and Mark Kelly. They could wield a lottttt of power in a 50/50 Congress (although not nearly as much as if the Dems had the votes to eliminate the filibuster, which they don’t). My first thought upon hearing that she might leave the party was that maybe Schumer was trying to recruit her because he feared Manchin might defect to the GOP. Manchin has lots of incentives to do that, after all, representing a state that voted overwhelmingly for Trump and being able to restore McConnell and the GOP to the majority singlehandedly if he switched sides. But that would make him the most hated man in the Democratic Party, and it would come to naught if Schumer countered by offering Murkowski the sun, the moon, and the stars to convince her to cross the aisle herself and give Dems 50 votes again.

Instead it sounds like maybe Manchin is the one recruiting her to join him in Schumer’s caucus. (“Murkowski said she is speaking frequently with U.S. Sen. Joe Manchin,” the Anchorage Daily News claims.) Which makes sense for him: The more willing Murkowski is to be the 50th vote for Schumer on tough bills, the more freedom Manchin will have to occasionally vote with Republicans to protect his right flank in West Virginia without tanking Democratic legislation.

Another key detail in the Manchin/Murkowski relationship:

A reminder of who leads the Senate Energy and Natural Resources Committee pic.twitter.com/TxFyD40dcS

Energy is a hugely important committee for Murkowski and Alaska given the state’s economic dependence on oil production. Manchin, as the new chairman, could promise her that she’ll have anything she wants from the committee if she crosses the aisle. Or maybe he’d even step aside as chairman himself and let her continue in that role.

“But wait,” you say, “wouldn’t Murkowski be primaried into oblivion by furious Trumpers if she ditched the GOP over her dislike for the president?” Well, even if she was, remember that she’s sufficiently well-known in Alaska that she was successfully primaried once before by a tea-party candidate and ended up winning the general election anyway as a write-in candidate. But it’s academic now because the traditional primary system no longer exists in Alaska. As of this year, the state will hold a jungle primary in which the top four finishers, regardless of party, advance to a runoff. Then, in the runoff, ranked-choice voting will be used to determine the winner. That’s a big advantage for an incumbent with Murkowski’s name recognition. Not only will she earn first-choice votes from voters of both parties, she’s likely to be second choice for various Dems and Republicans who may prefer someone else to her but prefer her to someone fringy from the other party. She’ll probably win, even as an independent. Go figure that she’s suddenly found her nerve about walking away from the GOP.

Lotta stories circulating today involving Republican senators crying crocodile tears about how bad Trump has been, sometimes on the record, sometimes not. But if you want to know how badly damaged his political stock is right now, this quote will tell you everything:

“Well I think we are thirteen days out and he is going to leave at noon on January 20. I do think the president’s rhetoric and his language has been over the line. I think it was irresponsible. I think it was reckless and I think he needs to recognize it and he has said that he will recognize and participate in a peaceful transition of power, and I think that is what is going to happen. I think that is what should happen,” said Cruz…

“Look, I think he plainly bears some responsibility, at the end of the day, criminals are responsible for their own conduct, and the terrorists, who conducted that attack they bear the responsibility but I think his angry rhetoric was reckless and I think it was harmful,“ added Cruz.

Ted Cruz doesn’t take a dump without first forming some overbaked strategy about how it might make him president someday. If *he’s* laying blame on Trump, he either thinks there’s more to lose than to gain by hugging the president at this point or he thinks his own image has been so damaged by his certification stunt in Congress that he needs to make amends to anti-Trumpers of all stripes. Better to blame Trump for what happened at the Capitol than accept blame himself, right?

Exit question: If this party were moving away from Trump in a meaningful way, would Ronna McDaniel have been easily reelected RNC chair today? Under her stewardship, the party lost the House, then the presidency, then the Senate. The man who handpicked her is likely to become the first president ever to be impeached twice next week and could conceivably face criminal charges for his role in inciting a mob to attack the U.S. Capitol. A party that’s doubling down on McDaniel is aggressively signaling that it’s learned nothing.