Biden vs. Fauci: New WH will give out first doses of vaccine to everyone instead of holding back some for second doses 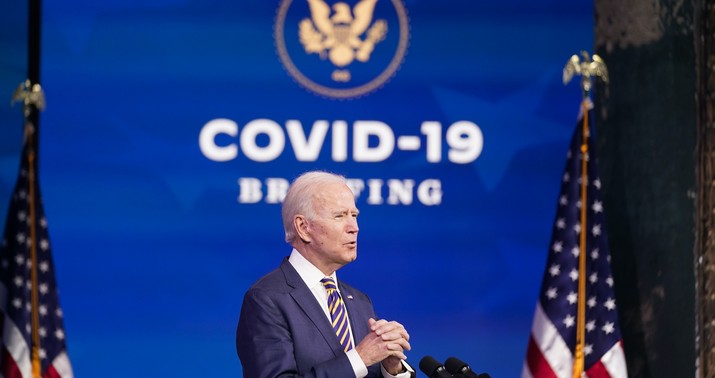 Reeeeeally weird that the first major COVID decision made by the Biden administration will end up putting Sleepy Joe on the side opposite Anthony Fauci (and Donald Trump).

It’s worth three minutes to read this post for background if you missed it on Sunday. The Trump administration’s policy is to reserve half of the existing supply of distributed vaccine to make sure that people who’ve gotten their first shot can get their second in a timely way. Pfizer and Moderna each recommend that the second dose be given within three or four weeks of the first; if the dose isn’t given in the timeframe, there’s no way of knowing what’ll happen once it is finally given. Could immunity be less durable than it should be? By reserving half the doses to make sure everyone gets two on the recommended schedule, Team Trump is being cautious and playing it by the book. (How often do you hear that said of them?)

The counterargument is that data shows that the first dose alone provides strong immunity, on the order of 80 percent. The second dose brings it up to 95 percent. If top priority right now is containing a raging pandemic, we may be better off administering every dose we have on the shelves currently in order to partially immunize twice as many people. The more Americans are walking around with partial immunity, the more slowly the virus should spread. Call it the “first doses first” approach.

What’s noteworthy about this debate is that there’s a genuine difference of opinion among scientists about it. Scott Gottlieb and many others support “first doses first.” Get those shots into arms lickety split and hope that Moderna and Pfizer can produce enough vaccine to let each recipient get their second dose on schedule. But other scientists prefer the more cautious “reserve half” approach. Most notable among them: Anthony Fauci, who’ll be chief medical advisor to the new president of the United States on January 20.

It’s a no-brainer that Biden would follow Fauci’s advice on this one, right? Wrong. Team Joe is implementing “first doses first,” they announced today:

“The president-elect believes we must accelerate distribution of the vaccine while continuing to ensure the Americans who need it most get it as soon as possible,” T.J. Ducklo, a spokesman for the transition team, said.

Biden’s team says he’ll use the Defense Production Act if necessary to accelerate manufacture of the vaccine, which makes it sound easy. Is it? How quickly could that new, highly specialized manufacturing capacity be brought online?

I’m wondering whether Fauci has already changed his mind about “first doses first,” not just because it’d be strange for Biden to ignore his counsel on a major early decision like this but because new data suggests that “first doses first” might be the smart way to go. Jazz noted this morning that the WHO believes the interval between the first and second doses can be stretched to six weeks if need be, and a study points to an outsized impact in reducing infections by partially immunizing more people quickly.

According to the study published in the Annals of Internal Medicine on Monday, by reducing the amount of the vaccine doses withheld to 10% for the first three weeks and supplying a steady dose of 6 million doses per week, the US could avoid up to 29% more cases over eight weeks.

A group of governors wrote to Gen. Gus Perna of Operation Warp Speed today to request that reserved doses be dispensed immediately in order to help states speed up the vaccination process. Which is odd, because my understanding is that we’re *backlogged* on vaccines, not shorthanded. Team Trump has shipped 21 million doses so far; in the 25 days since a New York nurse became the first member of the general population to be vaccinated, just 5.9 million Americans have joined her. Ideally we’d be doing two million vaccinations a day or thereabouts. In reality, we’re doing a tenth as many. The debate over “first doses first” is weirdly academic at a moment when we’re struggling to administer what’s already in pharmacists’ hands.

In fact, if you want to know how sloppy and chaotic the vaccination effort has been so far, here you go. Vaccine providers are turning to sites like Eventbrite to try to let people know where the vaccine is available because there’s no dedicated information platform for that job:

Before the pandemic, the platform was a place to book tickets to performances, art shows or pub crawls. Now, public health officials are using it to schedule vaccination appointments.

Mai Miller, 48, of Merritt Island, Fla., scoured Eventbrite last week in search of a slot for her mother. She scrolled through pages of dates and times, repeatedly refreshing the site and hunting for booking buttons that were blue, signaling availability.

She found a few, but she couldn’t seem to click on them quickly enough. “It was just a scramble,” she said. “Like musical chairs with 20 chairs and 4,000 people.”

In my mind’s eye I see a “vaccine.gov” website where you can enter your zip code and immediately see a map of providers with an appointment scheduling widget and wait times updated moment to moment. But it’s a figment of my imagination. Even now, nearly a month into this, if someone suddenly told me I was eligible to get the shot, I wouldn’t know where to go. I’d start googling and hope to stumble across a page somewhere with reliable information.

By the way, America’s worst governor, Andrew Cuomo, continues to distinguish himself as uniquely bad at every stage of the pandemic response, including vaccine distribution. My best theory to explain his actions lately, at least if Bill de Blasio is telling the truth, is that he’s actively trying to slow down the process:

Mayor @BilldeBlasio says NYC has 270,000 unused doses that could go to people over 75, age cohort likeliest to die from the disease, and 560,000 people in NYC over age 75. Asking state for permission to use those extra doses for the elderly.

Remember that Cuomo has threatened to impose heavy fines on any provider who goes outside the prioritization scheme, which at the moment is limited to doctors and nursing-home residents. New York *could* be expeditiously vaccinating endangered seniors but Cuomo’s too much of a control freak to do the obviously wise thing and relax the eligibility rules. Here’s what doctors are facing:

Dr. Peter Meacher expected to receive just a small supply of Moderna’s coronavirus vaccine to inoculate his staff at a network of clinics that he oversees in New York City. Instead, 600 doses arrived late last month, far more than he needed.

For two weeks, more than half of the supply sat in freezers. At other clinics in the city, small numbers of unused doses have even been thrown out.

Dr. Meacher said he would like to give the extra vaccine to high-risk patients, but had not for fear of violating strict eligibility rules from the state and city about who can receive it.

How can this country, and especially this state, be having so much trouble quickly dispensing a free vaccine to people at risk of death who desperately want it? What circle of bureaucratic hell have we arrived at?