Cuomo: I’ll fine doctors up to $1 million if they vaccinate someone who isn’t eligible yet 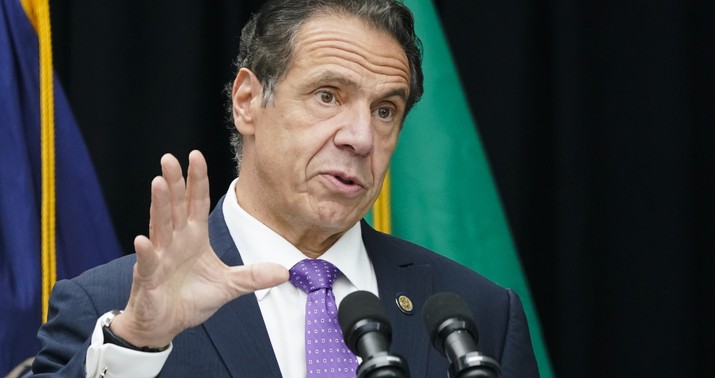 He said this a few days ago but it only got widespread attention online last night, the latest bit of evidence that America’s worst governor continues to do an abysmal job of managing the pandemic.

I’m going to be scrupulously fair to him. *If* the vaccination machinery were running like clockwork in New York, with 150,000 people getting the jab each day, say, I could understand him being a hard-ass about this. We don’t want corrupt doctors letting healthy younger people selfishly cut the line ahead of senior citizens, right? Plus, New York’s already had a case of a medical provider allegedly dosing out the vaccine to people who aren’t eligible. The line-cutting problem isn’t hypothetical. Cuomo brought down the hammer to scare other providers into following the rules and making sure the right people go first.

Vaccination in New York City is basically only occurring during regular business hours. Very little on weekends. Almost none on holidays.

We are in a war-like situation. We need to be vaccinating TWENTY FOUR-SEVEN. We are losing precious time. pic.twitter.com/BpOpCRHVby

Just one third of the total doses distributed to New York has been administered so far. A mere 1.2 percent of the state population has received the jab since mid-December. America is jogging along on vaccinations at a moment when the virus, propelled by its more contagious new variant, is beginning to sprint. We’re only a few weeks into this and yet the calculus has already begun to shift from making sure that rules of prioritization are strictly followed to getting as many doses into arms as quickly as possible in order to catch up to the virus and slow transmission, prioritization be damned.

In other words, true to the form he displayed last spring, Cuomo is already a step behind. By threatening doctors to stick rigidly to the prioritization scheme, he’s destined to slow down the vaccination process at a moment when it desperately needs to speed up.

This series of tweets started circulating online last night as a counterpoint to Cuomo’s logic. Israel is the smash success of the global vaccination process so far for complicated reasons, but a not so complicated one is that they understand their top goal is to get the greatest possible number vaccinated ASAP. Prioritzation is a secondary concern.

Another reason for the swift execution is the Israeli attitude of “organized chaos”. I visited two vaccine centers. The process focuses on speed rather than bureaucracy. Arrived early? Good. If there is a gap they will try to squeeze you in. End of the day? They will announce

Here is a prime example from today to Israel "organized chaos". End of the day in a vaccine center. A few doses left and will expire. Nurses go out, spot a pizza delivery guy, call him "pizza guy wanna vaccine?", jab, and another person has spike mRNA!https://t.co/cBkPqPz46W

In New York those nurses would face a $1 million fine from Darth Cuomo, all because they smartly decided to distribute an expiring vaccine rather than let it go to waste. The vaccinated pizza guy is now one less vector of transmission for the virus, yet Cuomo might revoke someone’s license for making it happen.

I’d bet decent money that within a week or two most governors are going to steer around to a much less complicated priority system in the name of speeding up vaccinations. Something like this, maybe: All senior citizens are immediately and exclusively eligible for the vaccine until the end of February, whereupon the entire population becomes eligible. But if there are no seniors in line at a vaccine provider’s facility at the end of the day in January and February, the provider is free to give out their extra doses to anyone of any age before those doses expire. If younger people want to queue up outside CVS in the late evening hours in hopes of getting an early vaccination from the surplus, let ’em do it. We need fewer rules on who gets the vaccine and when right now, not more. Simplify it. Time is of the essence.

The burning debate to come is whether the U.S. should administer every dose on the shelves as Pfizer and Moderna make more or whether it should continue to hold half of those doses back to ensure that people who’ve gotten their first dose can get their second in a timely way (i.e. three to four weeks). That’s not a problem at the moment because most states aren’t even halfway through the available doses they’ve received. But as the speed of the process ramps up, it’ll become pressing — and for the first time in the pandemic, we may see a sharp split among scientists about what the right thing to do is. The lead spokesman for holding back half the doses is none other than Anthony Fauci, who’s worried that administering the two doses in an irregular way will mess with the vaccine’s efficacy:

“I would not be in favor of that,” Dr. Fauci told CNN’s Elizabeth Cohen, regarding altering dosing schedules for the vaccines authorized for use in the United States, made by Pfizer and Moderna. “We’re going to keep doing what we’re doing.”

His opinion was met with approval by some experts, including Dr. Eric Topol, a clinical trials expert at the Scripps Research Translational Institute in California, who tweeted, “That’s good because that it’s following what we know, the trial data with extraordinary 95 percent efficacy, avoiding extrapolation and the unknowns.”

While clinical trials were designed to test the efficacy of second doses delivered three or four weeks after the first, British officials said they would allow a gap of up to 12 weeks.

Imagine if we dosed out everything on the shelves and ended up having to give people their second dose after 12 weeks instead of four, only to find that that delay resulted in weaker immunity. The pandemic might be prolonged by months. People might end up needing a third dose. And what about the unknown side effects of delivering a second dose after a three-month gap?

Other scientists believe the risk is absolutely worth taking. The first dose of the Moderna and Pfizer vaccine provides strong immunity in its own right, albeit of unknown duration. If we can double the number of people we immunize short term by dispensing all doses instead of holding half back, we might be able to blunt the pandemic at a moment when it’s more ferocious than ever. To return to the analogy of the vaccine racing against the virus, a “first doses first” strategy in which all available doses are dispensed might give us a burst of speed to catch up. Some experts are all for it, believing that it’s unlikely that a delay between doses will do much harm and that partial immunity for a greater number of people will do plenty of good:

Whether the bottleneck is due to vaccine production or distribution, giving people a single shot now and waiting on the second until the shortage abates will get more people vaccinated sooner. But will it work? Here, the clinical trial results for the Pfizer and Moderna vaccines are reassuring. While they were designed to test the effectiveness of two shots given about a month apart, both showed that the first shot had a substantial benefit beginning around 10 days afterward. In both trials, by the time of the second shot, the first was already 80 to 90 percent effective in preventing covid-19 cases…

Is there any potential downside to a delay? Yes. The strategy hasn’t been studied, so we don’t know if and when the immunity from the first shot begins to wane. But data from Moderna, for example, is reassuring. It shows robust immune response four weeks after the first shot, and most experts believe it is extremely unlikely immunity would somehow plummet by week eight or even week 12 following a single shot. Another concern is that with a delay, some people may forget to get their second shot. It will require effort to track people and remind them to receive it.

“Far better to have 100M people who are 80% protected than 50M people who are 95% protected, particularly as we are facing a foe that is getting smarter and nastier,” said one of the authors of that piece in a tweet. Meanwhile, a vaccine researcher at Oxford thinks that a delay between the first and second dose could actually be *beneficial,* extending immunity even longer than expected:

Regimes like the Ox/AZ use the same adenoviral vector to prime & boost so face 'anti-vector immunity' (immunity from the first dose to the viral 'postman' which must delivers the spike protein 'message' for the boost). This favours longer intervals specifically for Ad/Ad but…

Mechanistically, at 3w, the immune response to prime isn't complete- it hasn't yet produced all the memory B cells which give the best response to the boost. Once they are made, the memory cells last years! They won't forget how to respond to a boost in a few months.

The question is whether we should gamble and conduct a real-time experiment on tens of millions of people to see if he’s right, knowing that the partial immunity acquired from “first doses first” will surely help slow the spread of the virus at a moment when we desperately need to.

In lieu of an exit question, read Mitt Romney’s statement yesterday calling for “urgent action” to speed up vaccinations and proposing some ideas to get the ball rolling. It’s good to see a senator trying to instigate action but infuriating that Congress would find itself in the position of trying to quickly jury-rig a national vaccination strategy after the vaccine has already been distributed. They could have planned for this and acted to avert a crisis months ago. It’s the COVID stimulus fiasco all over again.

Insanity Wrap #130: One Day With Joe Biden and Everything Has Gone to Hell Already