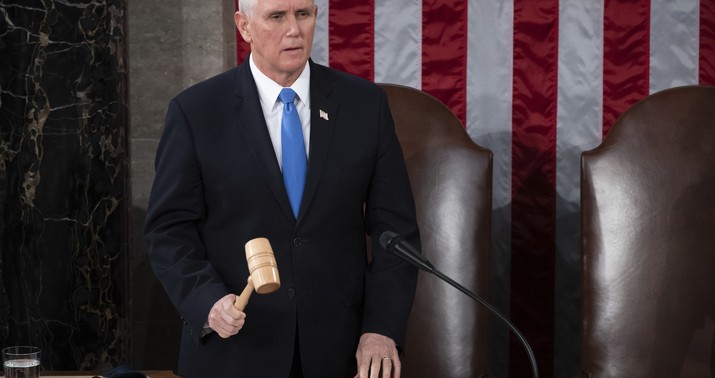 Having torched his presidential ambitions yesterday by doing his constitutional duty after escaping a murder attempt by his boss’s crazed fans, it was perhaps to be expected that Mike Pence isn’t in the mood for further conflict.

I much prefer impeachment as a solution, anyway. The 25th Amendment is a baroque, unprecedented procedure at a moment when America doesn’t need anything else unprecedented and baroque in its politics. If Trump’s to be tossed, let the people’s representatives take ownership.

Besides, impeachment’s easier. They’re not getting two-thirds of both chambers to remove Trump for “incapacity,” as the 25th Amendment requires. They have an outside shot at getting a House majority and two-thirds of the Senate, as impeachment requires. And if they do get it, they can bar him from trying again in 2024. Now that he’s been widely rebuked by the establishment of his own party, his ego may require him to run again to prove that the people love him even if the lousy anti-coup elites don’t.

“Not happening,” said a Republican close to Pence when asked about growing calls for him to replace Trump.

In private, Trump’s own supporters and advisors said they were furious at the president for turning his fire on Pence after four years where the No. 2 served as a loyal supporter despite so much controversy.

“Calling out Pence? Gimme a break,” a former senior White House official told Insider. “You talk about a guy who has just eaten s— for four years and indefatigably goes around and tries to be uplifting.”

A minor footnote in all this: Uh, what if the 25th Amendment is actually necessary right now?

Former Trump chief of staff John Kelly told CNN this afternoon that he would vote to remove Trump under the 25th Amendment, although he’s getting savaged for that on social media. Not just by Trumpers either; anti-Trumpers are killing him for having kept his mouth (mostly) shut about Trump’s unfitness all the way through the election.

John Kelly says the cabinet should have a discussion about invoking the 25th amendment. He also says if he was on the cabinet, he would vote to remove Trump. pic.twitter.com/4TgRZ95SYu

What do you do with a commander-in-chief who’s unwell *and* won’t be removed by his cabinet *and* probably won’t be removed by Congress either? Like I said this morning: You just sort of … ignore him. Especially if he asks you to do anything unusual, shall we say.

Why it matters: After Trump incited protesters to storm the Capitol on Wednesday, there’s a near universal view among top officials that he is unfit and unhinged, these sources said…

Two senior national security officials told Axios that they and their colleagues at the top level of government have decided to defy any requests they believe would put the nation at risk or break the law. They plan to force Trump to fire them.

Yeah, the thing about that last part is that at this point he really might fire them and try to replace them with, like, “the QAnon shaman.” What his subordinates need to be prepared to do is just sort of … not get the memo if he moves to fire anyone.

Especially at the Pentagon. When we talk about departments defying “dangerous” orders, that’s who we’re talking about. I hope Pence, McConnell, and Pelosi have all been on the phone to Chris Miller to make sure he’s prepared to run any presidential orders past the VP before following through. Maybe we can get through this nightmare by letting Trump play pretend president for 13 days while actual business is handled by Pence.

It would help if Fox News ran, like, a two-week, 24-hour marathon of “Fox & Friends” to keep him preoccupied and stuck in front of the TV.

Sounds like some orders — or “requests”? — are already being ignored:

Ajit Pai told me he will not move forward with a Section 230 rulemaking, ignoring the president's request in the final days of his presidency. https://t.co/V0qETcF7Kk

The Trump style of “fighting!” has also suddenly lost favor in some quarters of the party. Kelly Loeffler was prepared to object to the certification of Georgia’s election results yesterday and had refused to concede to Raphael Warnock in their Senate race so far. Then Trump got the mob going, the Capitol was overrun, and everything changed. Loeffler dropped her objection last night and this afternoon she’s conceded her own race:

Serving our great state has been the honor of my lifetime.

Whether she did that out of genuine civic virtue or because she’s suddenly desperate to rebuild her image as she reenters private life after tying it so closely to Trump, who knows.

Anyway, due to Pence’s disinterest in the 25th Amendment, the ball is entirely in Pelosi’s court on removing Trump. The latest word is that she’s gung ho:

Jerry Nadler’s committee would need to be bypassed in order to proceed before Trump’s term expires, but Nadler’s okay with that. Look at it this way: If he’s not impeached, what lesson ends up being learned by future presidents? “You’re free to incite a mob to ransack the Capitol, block certification of a presidential election, and try to murder the vice president so long as you wait until there are only a few weeks left in your presidency”?

I’ll leave you with this completely unconvincing statement from Kayleigh McEnany. I can’t imagine what inspired it. Certainly not civic virtue. Maybe Trump is upset that he’s probably going to be impeached again and is trying to get Pelosi to back off by telling her what she wants to hear. Did he even know she was going to read this statement or is this another case of executive branch employees just doin’ their own thing now?