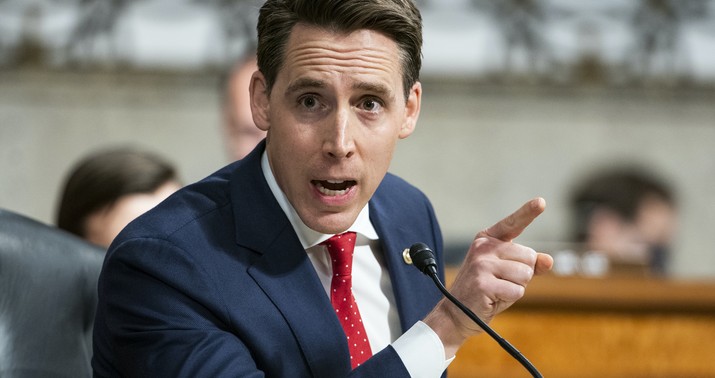 I feel a selfish impulse and a civic impulse upon reading this:

Millions of voters concerned about election integrity deserve to be heard. I will object on January 6 on their behalf pic.twitter.com/kTaaPPJGHE

My selfish impulse is that it’s fantastic. For two months, the creatures in McConnell’s caucus have bitten their tongues as the president of the United States hamhandedly tries to overturn an election, and not just in court. He’s leaned on state legislators to stage a soft coup on his behalf by rejecting the results of their states’ elections on November 3 on a pretense of fraud that he can’t prove. Now, thanks to Hawley’s blind ambition to be president someday by pandering relentlessly to MAGA fans, every one of his colleagues will be forced to go on the record in a floor vote on January 6. No more hiding. That’s what McConnell’s been fearing, knowing that anyone who votes to accept a state’s results will enrage MAGA fans while anyone who votes to reject them will enrage everyone else. Too bad, I say. We elect them to take votes, so let ’em vote. They don’t get to avoid taking a position on Trump’s final travesty.

Republican politics in 2020 is mostly an exercise in making enemies’ lists and now, thanks to Hawley, all sides will have a new list of enemies at the ready. Trump and his supporters will resolve to primary any GOPer who accepts Biden’s victory. The rest of us will resolve that anyone willing to coopt congressional certification of a presidential election to cater to conspiracy theorists is unfit for office. What’s not to like about this outcome?

My civic impulse is that it’s terrible. “It’s sad that Hawley is doing this. It’s scary that he’ll be rewarded for it. You can’t fix a country whose political incentive systems are so grossly out of whack,” says Tim Alberta, efficiently. Hawley knows that there’s no evidence that Biden won because of fraud. Read his statement carefully and you’ll see that he doesn’t even allege it. He’s objecting on process grounds, he stresses, questioning whether Pennsylvania followed its own statutes and complaining about Twitter’s suppression of the Hunter Biden story in October. It’s kabuki in the same way that Trump’s legal effort was kabuki, not designed to win so much as to impress Trump fans by showing a “fighting spirit,” assured that someone else will be blamed for the effort’s inevitable failure. It’s bad for the country by delegitimizing the new president without reason and by setting a precedent in which the January 6 certification becomes a circus in which ambitious members of the losing party cater to dead-enders, but it’s rational from a standpoint of nihilistic self-interest.

It’s vice-signaling, essentially. Hawley calculated, correctly, that signaling a little vice on a big stage would advance his career in the new GOP, so he’s going to do it regardless of what it might mean for his colleagues and for America’s civic culture. That’s the incentive system Alberta means. You can’t fix a country where vice-signaling is the smart move politically.

Hawley’s excuse is that Democrats have done this too, the all-purpose, can’t-fail justification for any Republican who wants to behave badly to the detriment of his country in 2020. And he’s right — to a point. Democrats have objected on process grounds to the January 6 certification in the past. What they haven’t done is objected while a sitting Democratic president attempts an autogolpe based on phantom claims of vote-rigging and asks his supporters to mass for a “wild” demonstration in the capital while Congress is deliberating. That part is new, and that context is essential. Hawley’s going to try to play the “good government” guy by insisting that he’s merely raising process questions, not challenging the election result, when what he’s really doing is lending congressional legitimacy to an unprecedented, if dunderheaded, coup attempt.

And that’s why MAGA will reward him. It’s not because they’re desperate to hear some Republican senator articulate the conflicts in Pennsylvania election statutes. They want to know who’s onboard with the coup and who isn’t, and here’s Hawley telling them that he’s so onboard that he’s willing to elbow past Tommy Tuberville and Kelly Loeffler to be the first senator who objects to the results on January 6. He’s calculated that being seen as aggressively pro-coup will be of great help to him in the 2024 primaries. And he’s right. Again, this is what “grossly out of whack” political incentives looks like.

Now that Hawley has bitten the bullet and defied McConnell by forcing a floor vote on the 6th, I assume various other ambitious Republicans will join him. There’s no reason for Tom Cotton not to object now. Ditto Ted Cruz, although Ted arguably already earned his pro-coup stripes by offering to argue the disgraceful Texas lawsuit before the Supreme Court earlier this month. Rarely will Republican presidential hopefuls have an opportunity to vice-signal as showy as this one so they’ll take full advantage. Even one of their own colleagues can’t resist laughing about how transparent it is:

Internal monologue: “I want to be President so I decided to try to get POTUS tweet saying I’m great even though I know this isn’t going anywhere, but hey… I’ll blame someone else when it fails.” https://t.co/2YuSFZ1RSk

“Beyond any clear policy, the defining feature of Trumpism is an inability to feel shame or embarrassment. Hawley has learned that lesson well,” sniffs Philip Klein. The funniest and most satisfying outcome here would be if Trump ended up turning against Hawley once he realizes that his new favorite senator isn’t going to go balls-to-the-wall on claiming election fraud. The MAGA types in the House like Mo Brooks and Marjorie Taylor Greene will do that, but Hawley’s going to try to keep one foot in the pro-coup camp and one foot in the respectable “I’m just pointing out flaws in the process” camp. Trump doesn’t care at all about the latter. The process could be flawed in every way imaginable and as long as he emerged from it as the winner he’d think it was the greatest electoral system on earth. What he wants to hear from Hawley is that the election was stolen, not that there’s a legal dispute over how Pennsylvania expanded mail-in voting this year, and if he doesn’t get that from him then POTUS might feel let down. In fact, Cotton and Cruz will be tempted to steal Hawley’s MAGA thunder by going a step further and boldly asserting (or at least strongly implying) that the result of the election was crooked. A party with malign incentives demands nothing less.