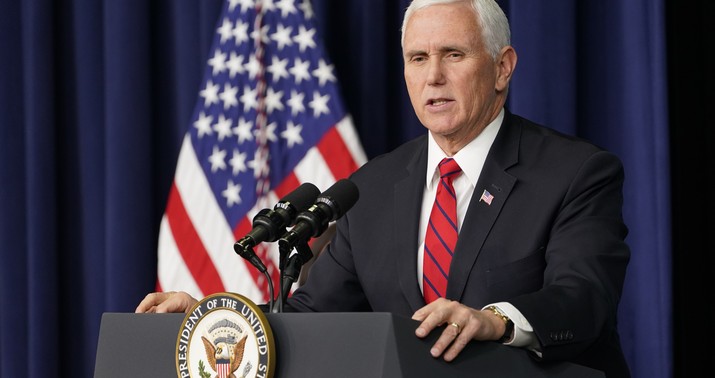 “Filing frivolous lawsuits shows that you’re a fighter, even if corrupt judges quickly apply ‘law’ to reject them,” snarked law prof Orin Kerr in response to this new one. I kinda like the idea of Pence being the nominal defendant, though, as it captures the increasingly bizarre tenor of the legal effort.

What we really need is for the president to join the suit so that we can have a Trump v. Pence court battle before POTUS turns on his VP for real. Which he will, soon enough.

Not a great sign when Trump’s own (former) communications director is nudging people to knock it off and start thinking about the next election already:

Uh, Guys.. why don’t we focus our efforts on winning back the House in ‘22 https://t.co/R2QROikPRr

Gohmert and a handful of the would-be electors sued Pence in federal court on Monday in a long-shot bid to throw out the rules that govern Congress’ counting of electoral votes next week. It’s an effort they hope will permit Pence — who is tasked with leading the Jan. 6 session of the House and Senate — to simply ignore President-elect Joe Biden’s electors and count Trump’s losing slates instead.

The lawsuit asserts that the 1887 law known as the Electoral Count Act, the vague statute that has long governed the electoral vote counting process with minimal drama, unconstitutionally binds Pence from exercising total authority to choose which votes to count.

“Under the Twelfth Amendment, Defendant Pence alone has the exclusive authority and sole discretion to open and permit the counting of the electoral votes for a given state, and where there are competing slates of electors, or where there is objection to any single slate of electors, to determine which electors’ votes, or whether none, shall be counted,” the suit contends.

Politico thinks the suit is designed to squeeze Pence by forcing him to take a position on the question. If he opposes the suit in court, it would mean that he’s essentially fighting on Joe Biden’s behalf, trying to forfeit his own (supposed) power to block Biden’s victory from being certified by Congress. If he declines to oppose the suit, it means that the plaintiffs should prevail — in theory. In reality, third parties would intervene in court to oppose it even if Pence refuses, as I assume he will. Or, since Pence is being sued in his capacity as VP, the DOJ would defend the suit on his behalf. Which would be … interesting:

Of course, now Rep. Gohmert has put DOJ in the position of having to actually tell a court that there was no evidence of fraud in the election.

Here’s the complaint. It claims that the VP rather than Congress has sole authority in deciding whether to accept a state’s electoral votes. If the judge, a Trump appointee, sides with Gohmert et al. then it would be entirely up to Mike Pence to decide whether to certify Biden’s victory or not on January 6. Three little problems, though. First is standing, a recurring sticking point in post-election litigation by Trump allies:

“The idea that the Vice President has sole authority to determine whether or not to count electoral votes submitted by a state, or which of competing submissions to count, is inconsistent with a proper understanding of the Constitution,” said Edward Foley, a law professor at the Ohio State University…

Election law experts said there’s a strong possibility that U.S. District Judge Jeremy Kernodle, a Trump appointee, would find that Gohmert, Ward and the other Republican litigants lacked a legal right to sue.

“I’m not at all sure that the court will get to the merits of this lawsuit, given questions about the plaintiffs’ standing to bring this kind of claim, as well as other procedural obstacles,” Foley said.

I was only half-joking when speculating about a Trump v. Pence lawsuit. If we’re looking for a plaintiff who’s at risk of suffering a concrete injury if Congress rather than the VP is allowed to certify Biden’s victory, Trump himself is the most obvious example. Did Gohmert and the rest offer him a chance to join this complaint?

The second problem has also recurred in “stop the steal” rhetoric since the electoral college met on December 14. It’s the bogus idea that swing states have each appointed two different slates of electors and it’s now up to Congress and Pence to decide which slate is the legitimate one. From the complaint:

“Accordingly, there are now competing slates of Republican and Democratic electors in five States,” the complaint goes on to say, which is a lie. But it’s an oft-repeated lie, amplified even by the likes of Newt Gingrich in the weeks since the electoral college met. The idea of “competing” slates of electors comes from a hypothetical scenario in which a state’s Democratic governor certifies the Democratic presidential candidate as the winner while the Republican legislature declares that the Republican presidential candidate is the true winner due to irregularities in the vote or whatever. In that case we’d have two different slates each backed by a different arm of the duly elected state government.

That’s not what happened this year. No legislature in any state won by Biden declared Trump the “true” winner and declared his electors to be the state’s legitimate ones. A few individual Republican lawmakers in each state invited Trump’s electors to come to the state capitol to symbolically cast their votes for Trump, but because those votes aren’t recognized by any official body, they’re not a “competing” slate. They’re just random people who engaged in an empty gesture to show their loyalty to the president, much like the rest of the shambolic post-election effort to overturn the results in court. It’s no different than if Hillary had thrown a fit after the 2016 election, demanded that her electors in the Rust Belt states gather and symbolically vote for her, and then asked Vice President Joe Biden to recognize those electors as legitimate instead of the pro-Trump electors certified by the state.

It’s a farce. In fact, the complaint carries the farce an extra step by trumpeting the fact that “members of the Arizona Legislature” passed a joint resolution declaring that Arizona’s electoral votes should go to Trump. In reality, just 17 of the 60 members of the Arizona House supported that resolution and just five of its 30 state senators agreed. There was no majority in either chamber, it was just random MAGA lawmakers once again making a symbolic gesture of support for Trump. It would be like if half of Chuck Schumer’s caucus in the Senate signed onto a resolution calling for $2,000 stimulus checks. That’s not meaningful in any way except as a PR stunt. You need a majority in both chambers to pass a resolution before it can become law.

The third problem is … just consider how absurd American elections would be if the sitting vice president had total authority over whether to accept or reject a state’s electoral votes. In theory the party that controlled the White House could maintain its control indefinitely on the say-so of the VP. All they’d need is the same sort of charade about “competing” slates of electors that Gohmert et al. are engaged in right now, which would be easy enough to arrange per my Hillary hypothetical above. So long as an election is close-ish in a meaningful number of swing states, the losing candidate from the party in power would simply need to (1) cry “fraud” and invent some nonsense about the Kremlin or Dominion rigging the vote; (2) ask her electors in swing states that she lost to gather and symbolically cast their votes for her; (3) ask the sitting VP from her party to declare her the real winner on January 6 by refusing to accept the votes of states where fraud has been alleged. Biden could have easily designated Hillary the winner in 2016 under this logic. Al Gore could have declared himself the winner in 2000. It’d be completely wacky.

But then, a lot of people who should know better are up for wacky possibilities right now:

At that moment, the Presidency will be in his hands.

And there is nothing stopping Pence, under the (plenary and unappealable) authority vested in him as President of the Senate, from declining to open and count the certificates from the six disputed states.

Per the 12th Amendment: "[T]he votes shall then be counted[.] … The person having the greatest number of votes for President, shall be the President[.]"

Always a good idea when you’re trying to sell the public on an outrageous country-destroying authoritarian power grab to cite Stalin in support of it. I also like the hubris involved in reasoning that because a majority of Republicans have been led to believe that something false is true, the fact that a majority of the total population believes otherwise should be of no consequence.

A good, healthy place to be as a movement as we approach January 6. Exit question: How long will lawsuits attempting to overturn the election continue to be filed *after* Biden has been inaugurated? I’d guess until May.

Buyer's Remorse Sets in Over Joe Biden, But It's Much too Late for the Crying