Thune: We’re trying to convince Tommy Tuberville not to object to the election results on January 6 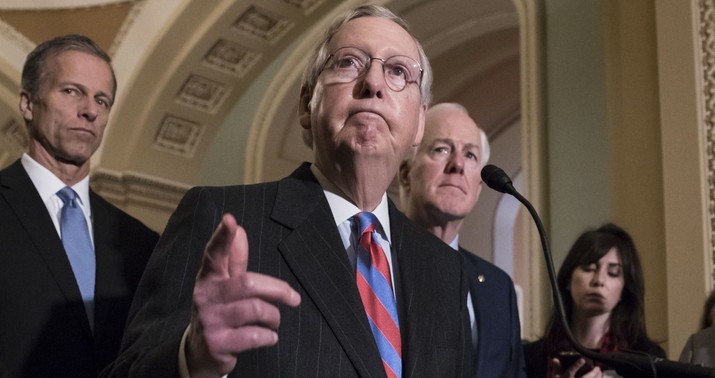 I guess Trump warning him that his political career is over didn’t have the desired effect.

McConnell and the GOP leadership can and will try to talk Tuberville out of objecting but the effort is doomed. Even if Tuberville stands down, some other populist in the chamber will break ranks and do it. It’s a simple matter of incentives. Without any objections from the Senate, there’ll be no floor debate about election irregularities and no floor vote on whether to accept a particular state’s election results in either chamber. Dozens of House Republicans are preparing floor speeches about vote-rigging conspiracies — but they won’t get a chance to deliver them unless and until at least one senator objects.

Imagine if no one does and this whole grievance parade ends up being canceled. Who’ll be blamed by MAGA Nation in that scenario? Why, the populists will. Tuberville, Ted Cruz, Rand Paul, Tom Cotton, Josh Hawley, Marsha Blackburn, new guy Bill Hagerty: Trump fans will demand to know why not a single one spoke up in the president’s defense by objecting when they had the chance. It’s the ultimate loyalty test and they’ll each have failed, probably ending their chances of winning a future presidential primary.

Whereas if any one of them objects, thereby forcing a floor debate and a floor vote, blame will shift from the populists to the RINOs. Cruz and the rest can then safely vote to reject the results from various swing states in order to stay on MAGA’s good side. Trump’s ire will turn instead to those Republicans who vote to accept them, starting with McConnell and Thune but by no means ending with them. What will Marco Rubio or Mike Braun or Ron Johnson do when forced to declare themselves?

Thune told The Hill that efforts are underway to try to convince Tuberville not to speak up:

“Ultimately every senator will have to make their own decision about that but I think there will be people, yeah, reaching out him just to kind of find out” what he’s going to do, Thune said of Tuberville’s intentions about the Electoral College tally on Jan. 6.

“If nothing else, we need to kind of know the plan,” he added. “We’ll see. He’s made some public statements” about objecting to the vote.

“I’m hoping in the end that all senators will conclude that this election needs to be over with and it’s time to move on,” he said.

Another unnamed Republican senator told the paper that he thinks Tuberville will do what Trump wants in the end because, well, why wouldn’t he? “The question is will [Tuberville] listen [to McConnell] because his whole election was predicated on Trump not liking Sessions,” the senator said. “From a cold-blooded standpoint … if Trump asks him [to object], I assume he would probably do it because he would see no downside.” Trump has indeed asked him and sounded happy with the response he got from Tuberville. Why would Tommy T want to become the new Jeff Sessions by disappointing Trump on his third day on the job?

I saved at least 8 Republican Senators, including Mitch, from losing in the last Rigged (for President) Election. Now they (almost all) sit back and watch me fight against a crooked and vicious foe, the Radical Left Democrats. I will NEVER FORGET!

If a Democrat Presidential Candidate had an Election Rigged & Stolen, with proof of such acts at a level never seen before, the Democrat Senators would consider it an act of war, and fight to the death. Mitch & the Republicans do NOTHING, just want to let it pass. NO FIGHT!

Someone’s going to object. If it’s not Tuberville, it’ll be Blackburn. If it’s not Blackburn, it’ll be Hawley, etc. Frankly, it’d be untrue to the spirit of what the party’s become if this process didn’t end up being as obnoxious, conspiratorial, and rejectionist as possible to the very end. Having Congress quietly rubber-stamp the electoral results after the fiasco of the past 53 days would be a bizarre anticlimax.

The best thing Republican senators have going for them is the fact that an even bigger scapegoat is destined to emerge from the “grand betrayal” of January 6 than those who vote to accept the results in states won by Biden. That would be the VP, who’s required to preside over the session. Pence’s role is essentially ceremonial but a president who’s grown paranoid about the loyalty of “his” party has no patience for ceremonial passivity by his deputies right now:

Hours before President Donald Trump retweeted a message for his vice president to “act” in stopping the ratification of the Electoral College, he met for more than an hour in the Oval Office with Mike Pence, whom he has complained recently isn’t doing enough to support his bid to overturn the election…

Trump has told people recently that Pence isn’t doing enough to fight for him as his presidency ends, and has recently taken an interest in Pence’s traditional role during the certification. As President of the Senate, Pence presides over the proceedings.

Sources say Trump in recent days has brought the matter up to the vice president and has been “confused” as to why Pence can’t overturn the results of the election on January 6.

Pence and White House aides have tried to explain to him that his role is more of a formality and he cannot unilaterally reject the Electoral College votes.

One law professor told WaPo that “Trump would probably tell Pence, ‘Just go declare us reelected,’” which is doubtless correct. But according to aides, “Pence is hoping for a low-key Jan. 6 and is not planning any unnecessary drama” and reportedly told House Republicans who recently met with Trump that “his constitutional duty will be to open and count the results, not to determine their legitimacy.” Unlike the Senate GOP, Pence really is just a rubber stamp for whatever happens at the session. If the election results are to be blocked, it’ll need to happen somehow on the Senate floor. Pence will spend the weeks after January 6 trying to remind MAGA fans of that but he’s destined to get the brunt of their abuse. After all, an act of “disloyalty” by Trump’s own handpicked VP obviously dwarfs any similar act McConnell or Thune or Rubio or whoever in terms of the magnitude of its betrayal.

I keep thinking that Pence will find an excuse not to preside over the session, leaving it to Chuck Grassley instead, but then I consider that that probably won’t do him any good. The complaints about him will simply shift from “Why did you accept the election results?!” to “Why didn’t you attend the session so that you could reject the election results?!” In an odd way, I understand why MAGA fans will be furious with him after he inevitably disappoints them: Why would Pence spend four years passing every loyalty test only to fail the last one? Having gone all-in on Trumpism believing that it’s his ticket to becoming the GOP nominee in 2024 or 2028, why wouldn’t he just do what Trump wants this one last time by rejecting the results on January 6 and leaving it to the Supreme Court or whoever to certify Biden as the winner?

Here’s Pence a few days ago at the Turning Point USA conference trying to please Trump and the crowd by insisting that their effort to contest the election continues. Even so, he’s planning to get out of Dodge just hours after the session on January 6 ends, heading off on a trip to Bahrain, Israel, and Poland. Exit question: What if Tuberville objects to several states’ results, forcing a lengthy floor debate that runs all night and pushes the vote-counting off until the morning of January 7? Is the trip canceled, or will Pence bail out of the session after a few hours on grounds that he has commitments abroad?