John Thune: Any attempt to overturn the electoral college vote on January 6 is going down “like a shot dog” 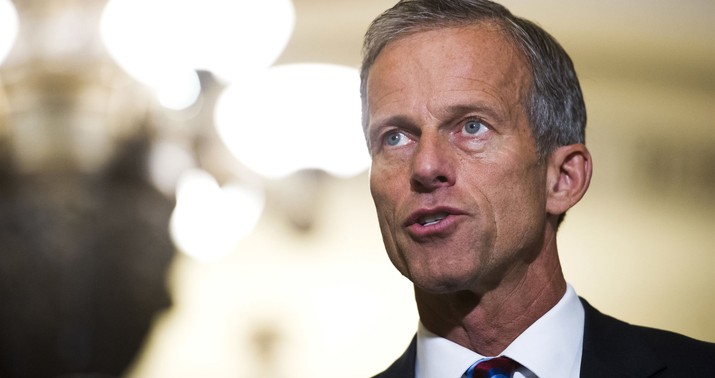 He’s right, but it’s not an altogether bad thing to have the president convinced that January 6 is the day this all turns around for him. As I said last night, there are bad, very bad, and duck-and-cover bad ways that his presidency could end. A last stand on the 6th featuring a round of speeches by MAGA congressmen before Congress certifies the electoral college results is the least bad by far. The more Trump is focused on that date, the more incentive he has not to do anything, er, rash over the next two weeks.

Unfortunately, there’s no way around the fact that he’ll be free to do something rash between the 6th and Inauguration Day. Maybe his advisors can start talking up 2024 to him, convincing him that the uglier this gets on his way out, the less likely voters will be willing to take another chance on him four years from now.

But yeah, hopefully needless to say, the kabuki effort to block Biden’s win on January 6 is going down like a shot dog.

Thune to me: “I think the thing they got to remember is, it’s not going anywhere. I mean in the Senate, it would go down like a shot dog. I just don't think it makes a lot of sense to put everybody through this when you know what the ultimate outcome is going to be.”

There’s no question that multiple Republican members of the House, led by Mo Brooks, will object to the results from certain swing states on the 6th. The suspense has to do with whether Trump or McConnell will win the tug of war over whether any Republican in the Senate will join them. Thune is stating the leadership’s position: No, no, no. The votes to overturn the election aren’t there so why force your colleagues to go on the record on such an explosively divisive issue? Whereas Trump’s position is: Might as well try everything. Even if we lose, at least we “fought.” And the floor votes on whether to overturn the results in a given state will provide him and his fans with a handy list of who’s loyal and who isn’t.

Which makes perfect sense if you view MAGA’s ultimate “fight” as not with Democrats but with their own party’s establishment. How many liberals get under the skin of Trump fans the way Mitt Romney or Jeff Flake or (more recently) Chris Christie do? The least populists can get out of this futile effort to overturn the election is an official enemies list of Republican members of Congress. That’s January 6.

The president met with some of the ringleaders of the House effort yesterday at the White House. The plan is simply to put up a good show, it seems, by delaying the certification for a number hours. Remember that if one member of the House and one member of the Senate object to accepting a state’s votes, that forces a two-hour debate followed by a floor vote. If there are objections to the results in six or seven states, we’re talking about many hours of floor debate. That’s a *lot* of speechmaking time for congressmen eager for a platform from which to grandstand.

Rep. Mo Brooks (R-Ala.) — who is spearheading the long-shot push to overturn the election results in Congress — organized the trio of White House meetings, which lasted over three hours and included roughly a dozen lawmakers. The group also met with Vice President Mike Pence, who will be presiding over the joint session of Congress when lawmakers officially certify the Electoral College votes on Jan. 6, as well as members of Trump’s legal team…

In addition to the “dozens” of House Republicans who are committed to objecting to the election results, Brooks said there are “multiple” Senate Republicans who are now receptive to the effort, though he declined to name names. Sen.-elect Tommy Tuberville (R-Ala.), whom Trump has repeatedly praised on Twitter recently, has said he is considering the idea…

Still, the whole episode could turn messy — and become one last Trump loyalty test. Brooks, who said there are plans to challenge the results in six states, said total debate time could clock in at around 18 hours. That means the vote-counting process could bleed into the wee hours of Jan. 7.

It’s unclear how specific the objections to each state’s results will be, whether they’ll get into detail about claims of voter fraud or just register an objection in order to proceed to the floor-debate phase. But that phase will be lengthy: Brooks told CNN that there may be as many as 72 five-minute speeches on the Republican side, an opportunity for GOP incumbents to cut campaign commercials on the taxpayer dime by pushing conspiracy theories about fraud that Trump’s lawyers remain unable to prove in court. Another unknown is the extent to which House Democrats will participate in the process. Will they boycott the floor debate, returning only for the final vote on whether to accept a state’s results, or will they push back by delivering speeches of their own? I assume they’ll push back, not wanting to give Republicans an uncontested open forum in which to denigrate the election results.

I’m also curious to see how many GOPers dare to amplify the smears about Dominion and Smartmatic rigging the vote for Biden now that the companies have begun to fight back against smear merchants. There’s nothing either one can do if January 6 turns into a series of lies about their business before a national audience, as the Constitution’s Speech or Debate Clause makes the floor of the House one of the few places in the United States where defamation law doesn’t reach. But that’s what makes it interesting: How many congressmen, knowing that the companies are seeking legal redress for the enormous damage they’ve suffered, will exploit their constitutional privilege to do further damage to them just because they know some of their voters would relish it? That’ll be an opportunity for truly nihilistic demagoguery.

There’s one more verrrrrry interesting element to the spectacle on January 6. Axios mentioned it today as part of a hair-raising new report about the president turning on his closest White House allies because they won’t lie to him about still having a path to victory the way Sidney Powell will. (“We cannot stress enough how unnerved Trump officials are by the conversations unfolding inside the White House.”) The suspicion extends all the way to the ultimate Trump loyalist, Mike Pence, who’ll be presiding over Congress’s session.

Trump is lashing out, and everyone is in the blast zone: At this point, if you’re not in the “use the Department of Homeland Security or the military to impound voting machines” camp, the president considers you weak and beneath contempt…

Trump views Pence as not fighting hard enough for him — the same complaint he uses against virtually everybody who works for him and has been loyal to him.

Pence’s role on Jan. 6 has begun to loom large in Trump’s mind, according to people who’ve discussed the matter with him.

Trump would view Pence performing his constitutional duty — and validating the election result — as the ultimate betrayal.

It’s 100 percent true that Pence has largely stayed away from the “we wuz robbed” messaging about voter fraud. But he can’t hide on the 6th — unless, I suppose, he wimps out and finds an excuse not to be at the Capitol that day, leaving it to Chuck Grassley to do the honors. Pence was reportedly part of the meetings yesterday with Trump and Brooks’s cohort, making sure they’re on the same page in terms of proper procedure on registering objections, etc, which makes me think Pence *will* show up on the 6th. But if he does, it’s unthinkable that he’ll try to disrupt Congress or reject the results somehow after the final floor vote to certify the electoral college votes. It’s not who Pence is. And even if he was that guy, I’m not sure what he could do, precisely, to “reject” the results. Once Congress has voted, that’s that. The most he could do, I assume, would be to protest the vote by refusing to formally record the floor vote or whatever and then leave, forcing Grassley to do it.

But even that probably wouldn’t placate Trump. Anything short of actually blocking Biden’s victory, which is impossible, will be regarded as a failure. And Mike Pence will be an inextricable part of that failure in Trump’s eyes, especially if (as expected) he ends up doing his duty and accepting the results after all. Imagine having spent the past five years bowing and scraping to the president every day, believing it’s your ticket to your party’s presidential nomination in 2024 or 2028, only to have him turn on you viciously with two weeks left in his term because you wouldn’t plunge the country into crisis by refusing to accept the will of the voters. Here’s your reward for loyal service, Mike. You earned it.

By the way, according to Axios, Trump’s suspicion of Pence deepened because of “a Lincoln Project ad that claims that Pence is ‘backing away’ from Trump. This ad has clearly got inside Trump’s head, the source said.” I’ve embedded the ad below. It was *clearly designed* to try to get inside the president’s head, even addressing him directly. It’s surreal to think of an outfit running a psy op so brazenly on the leader of the free world and having it work like a charm, but here we are.

.@realDonaldTrump, the end is coming. Even @Mike_Pence knows. He's running from away you, Donald. And on January 6th, @VP will preside over the vote proving @joebiden beat you. pic.twitter.com/C1tSCDEu1T

Buyer's Remorse Sets in Over Joe Biden, But It's Much too Late for the Crying