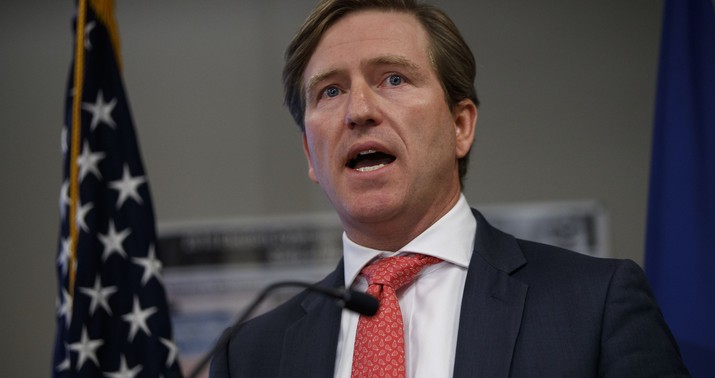 Some weeks the Sunday shows bore in on one all-consuming story, other weeks they’re spinning a dozen different plates on poles. This week is an example of the latter as no fewer than four topics jockey for Americans’ attention.

1. The COVID vaccine rollout. Moderna is officially joining the national effort this week, distributing upwards of six million doses across the country following Friday night’s emergency-use authorization by the FDA. On to discuss it this morning is Moncef Slaoui, the head of Operation Warp Speed, who’ll chat with “State of the Union” about whether the country’s hitting its weekly targets and what’s going on with the unexplained slowdown in distributing Pfizer’s vaccine. Also scheduled are surgeon generals past, present, and future: Vivek Murthy, who served as Obama’s SG and will return to the job under Biden, speaks to “Meet the Press” while Trump SG Jerome Adams talks with “Face the Nation.” Adams received the vaccine on Friday morning with Mike Pence and will be asked whether he’s felt any side effects. He and Murthy will also be pressed about the reports of a handful of recipients having anaphylactic reactions.

2. The Russian mega-hack. Mike Pompeo confirmed on Friday that it’s “pretty clear” Russia was behind it but that’s the only thing that’s clear at this point. The star guest is former CISA chief Chris Krebs, who’s been in the news because Trump fired him for debunking various MAGA conspiracy theories about election fraud. It was CISA under Krebs’s leadership that was supposed to detect foreign intrusions into U.S. government systems. They failed spectacularly. Krebs will discuss it with “Meet the Press” and “State of the Union.” The CEO of FireEye, the firm that finally sniffed out the Russian presence, will also appear on “Face the Nation” to explain what we do and don’t know about how extensive the infiltration was.

3. Biden cabinet appointments. Sleepy Joe is still mulling some big nominations, notably attorney general and labor secretary, but other chairs are being filled every day. This week’s most prominent selection was Pete Buttigieg, tapped to lead the department of transportation. He’ll appear on “State of the Union” to make the case that a young ex-mayor from a small midwestern city lacking meaningful experience with transportation infrastructure is the perfect choice. Meanwhile, Jennifer Granholm, Biden’s choice for the department of energy, will talk with “This Week” about her own nomination and incoming chief of staff Ron Klain will preview Biden’s remaining selections with “Face the Nation.”

4. The COVID stimulus negotiations. Whether Congress can pull itself together and approve financial relief to struggling Americans before New Year’s remains a mystery as I write this on Saturday morning, although in their defense they’ve only had six months and numerous indicators of a coming economic crash to spur them to action. The sticking point right now is whether the Fed will continue to enjoy emergency lending powers as Biden takes office, as Dems want, or whether those powers will be clawed back, as Republicans want. Mary Daly, president of the Federal Reserve Bank of San Francisco, will offer her view to “Face the Nation.” And three members of the Senate will chime in on where they stand: Democrat Mark Warner will sit with “This Week,” Republican John Barrasso will speak to “Fox News Sunday,” and Mitt Romney will talk to “State of the Union.” All three will asked about the other subjects in the news this morning, of course, especially the Russian hack. Expect hawkishness from Mitt. The full line-up is at the AP.