HHS “science advisor” in July email: We want people getting infected with coronavirus 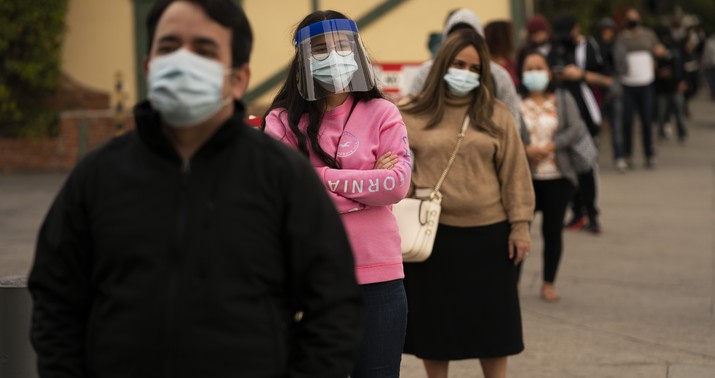 I’ve written about this guy, Paul Alexander, before. He was brought in as the “science advisor” to Trump loyalist Michael Caputo, who was installed at HHS in April as the department’s chief spokesman — ostensibly. His real job, it seems, was to ride herd on scientists within the department and make sure that they didn’t say or do too much to contradict the White House’s message that it was safe to reopen the economy. Caputo took a leave from the administration in mid-September after he posted a bizarre Facebook video claiming that the CDC was guilty of “sedition” and that there might be a plot to kill him. Alexander left around the same time. Stories began trickling out soon after about how the two had browbeat top scientists at the CDC, accusing them of trying to embarrass the president with their play-it-safe guidance on containing the virus.

I don’t think anyone in the administration has ever publicly admitted it, including Scott Atlas (who’s also since left), but the White House’s de facto approach to the pandemic by fall was a herd immunity strategy. Open the economy, go about your business, there’s nothing to fear if you’re not elderly. Trump himself famously made a pitch along those lines when he returned to the White House after being hospitalized for COVID, urging people not to let the virus dominate their lives. But the words “herd immunity” were rarely uttered for good reason: If you’re aiming for that, necessarily you’re either indifferent to many people getting infected or you’re downright enthusiastic about it. You’re playing a numbers game in which the more healthy Americans get the virus, the better it is in accelerating the end of the pandemic.

You’re pro-infection, in other words. Which is a weird thing to be about a disease that’s killed 300,000 people and decimated the U.S. economy.

Today Politico is reporting that the apparent “herd immunity” strategy by the administration was much more explicit internally. Alexander endorsed it, and its consequences, by name in early July:

“There is no other way, we need to establish herd, and it only comes about allowing the non-high risk groups expose themselves to the virus. PERIOD,” then-science adviser Paul Alexander wrote on July 4 to his boss, Health and Human Services assistant secretary for public affairs Michael Caputo, and six other senior officials.

“Infants, kids, teens, young people, young adults, middle aged with no conditions etc. have zero to little risk….so we use them to develop herd…we want them infected…” Alexander added.

“[I]t may be that it will be best if we open up and flood the zone and let the kids and young folk get infected” in order to get “natural immunity…natural exposure,” Alexander wrote on July 24 to Food and Drug Administration Commissioner Stephen Hahn, Caputo and eight other senior officials. Caputo subsequently asked Alexander to research the idea, according to emails obtained by the House Oversight Committee’s select subcommittee on coronavirus…

Alexander was a top deputy of Caputo, who was personally installed by President Donald Trump in April to lead the health department’s communications efforts. Officials told POLITICO that they believed that when Alexander made recommendations, he had the backing of the White House.

It took us awhile but we’re well on our way now with the Alexander approach, replete with 3,000 or so deaths per day. Congrats, Paul, wherever you are:

I will go to my grave not understanding why anyone would endorse a herd immunity strategy knowing that a vaccine is months away. In a world where medicine isn’t coming to the rescue, you might swallow hard and decide that there’s no way out of this nightmare except to try to encourage community spread among those parts of the population most likely to survive getting COVID and hope that the virus peters out that way before it reaches the elderly. That’s what you do when you have no choice but to play the long game. With Pfizer and Moderna working around the clock to deliver safe immunity by year’s end, though, we never had to play the long game. We were playing a short game, and the short game calls for maximum containment. Just hang on, keep everyone safe, and wait for Pfizer.

Sweden played the long game too, gambling that the virus would infect so many of its citizens by fall that its winter second wave would be mild. They paid a steep price for that bet, absorbing a much higher rate of death in the spring and summer than their Scandinavian neighbors. Here’s the payoff:

They gave up on herd immunity last month, limiting the size of public gatherings for the first time. A few weeks later, daily deaths reached their highest levels since May. Here’s how things stack up in terms of new cases per capita among the U.S. and Sweden, the two “herd immunity” countries, and other western European hot spots that have been more willing to resort to partial lockdowns:

The fatal flaw, literally, in the herd immunity approach is that there’s no way to wall off the truly vulnerable parts of the population from the healthier parts. Even if you’re willing to tolerate a level of “acceptable casualties” among the latter group, inevitably it’ll turn into unacceptable casualties among the former. Again, how anyone could have willingly chosen to absorb that risk fully aware that a vaccine was coming is one of the mysteries of the age. The most plausible explanation is also the most sinister, that adherents just didn’t care about containing the virus or how many people might die. There was no herd immunity “strategy,” there was simply an imperative to reopen the economy and swallow whatever number of deaths might result in the process. Herd immunity was rhetorical cover, nothing more, for giving up on trying to mitigate the pandemic.

MAGA media sources have noted this week how wrong certain naysayers were earlier this year when they scoffed at Trump’s prediction that a vaccine would be ready before the end of the year. That’s fair enough; the vaccine’s speedy development and distribution is Trump’s greatest achievement as president so it’s fine to make his critics eat a little crow about it. But the fact that he expected the vaccine to arrive sooner rather than later also makes his administration’s interest in herd immunity that much less defensible. He knew, and Caputo and Alexander and Atlas knew, that we’d soon be able to achieve herd immunity in a safe way courtesy of Pfizer and Moderna. They preferred the deadly way instead. Why?

In lieu of an exit question, read this story about two young Trump appointees working at the CDC this past year during a once-in-a-century pandemic, only to find the agency hamstrung and muzzled by the White House for political reasons. “Everyone wants to describe the day that the light switch flipped and the C.D.C. was sidelined. It didn’t happen that way,” said one to the NYT. “It was more of like a hand grasping something, and it slowly closes, closes, closes, closes until you realize that, middle of the summer, it has a complete grasp on everything at the C.D.C.” He continued: “Every time that the science clashed with the messaging, messaging won.” And now here we are.