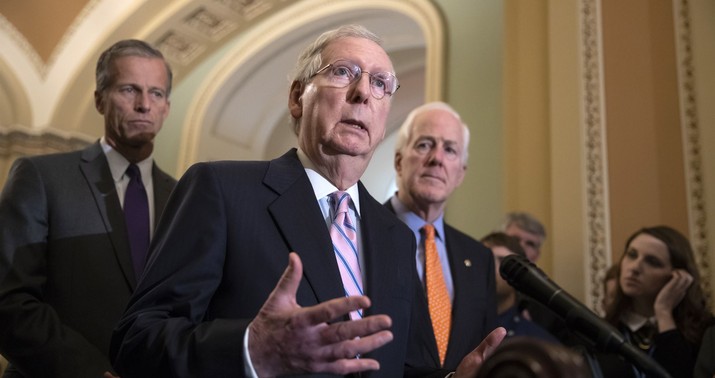 This is a no-win vote shaping up for Senate Republicans from purplish states. On January 6, when Congress meets to officially record the votes of the electoral college, any state’s electoral votes can be challenged if one member of the House *and* one member of the Senate object. In that case, each chamber would debate for two hours and then hold a floor vote on whether to accept those electoral votes or not. If the two chambers deadlock, with the House voting yes and the Senate voting no, then the results certified by the governor of that state become the tiebreaker.

Which is a fancy way of saying that there’s no way to block Biden’s victory. Even if Senate Republicans provide 51 votes to reject Georgia’s electoral votes, for instance, the Democratic House would obviously vote to accept them. Brian Kemp’s certification of Biden’s win would then break the deadlock. The same would be true for Arizona, Michigan, Wisconsin, and Pennsylvania, all of which have certified Biden’s victory. There’s nothing congressional Republicans can do to stop Sleepy Joe.

A sane political party would reason that there’s no point in having a fight which it’s doomed to lose, but the modern GOP has always had a soft spot for pointless moral victories in which key players get to grandstand in hopes of ingratiating themselves to the base. (Trump’s threat to veto the defense spending bill because it doesn’t repeal Section 230 is a nice demonstration.) The quintessential example is Ted Cruz leading the Senate GOP to block government funding in 2013 in hopes of thwarting the implementation of ObamaCare. Didn’t work, of course: They successfully shut down the government but that was destined to end before long, since Democrats weren’t about to give up on Obama’s biggest policy achievement just because of a Ted Cruz ransom demand. The only suspense on January 6 is whether Cruz or some other Republican in the Senate will wage another pointless fight to reject certain states’ electoral votes. Rep. Mo Brooks has already vowed to object in the House; all that’s missing is a Senate counterpart to join him.

McConnell and the leadership are already worried about it and angling to make sure there isn’t one.

Jake beat me to it before we could publish, but I can confirm this.

A source on the call said McConnell told the conference:
“I hope there’s zero sentiment for it”

Thune said: “It would be great if there were no members that took up that issue” https://t.co/pqrIw4HZAc

Imagine you’re Marco Rubio, running for reelection in two years in a state that’s still … sort of purplish. (Purplish red, let’s call Florida.) You’re not worried about losing the general election but you are worried about a potential primary challenge from some kooky Trumpist figure. And McConnell’s worried on your behalf, since he knows that a successful primary of Rubio by a kook might just fumble away a Senate seat that would otherwise be easily held by the Republican incumbent. If some objector forces a floor vote on January 6 on whether to accept Georgia’s results, Rubio suddenly faces a tough choice. Does he vote no, joining the rejectionist MAGA chorus intent on treating Biden as an illegitimate president? Or does he vote yes, risking a serious primary challenge?

The only winning move is not to play, to not have that floor vote at all. That’s why McConnell and Thune are getting out early to try to dissuade it. Although we’re left to wonder: If no one in the caucus objects, would that in itself trigger primary challenges to vulnerable senators? Why didn’t you object when you had the chance, Marco?

Why did you “surrender”?

Kevin McCarthy also sees the peril here for Senate Republicans, but there’s probably nothing he can do in his own chamber to stop Brooks or Matt Gaetz or Jim Jordan or some other MAGA loyalist from objecting. It’ll have to be Senate Republicans that thwart the effort:

“The president is right to go to the courts, have his legal challenges heard,” McCarthy said. “And he said he still has more opportunity to do that, so we’ll wade through and see what happens.”…

Asked how much support there was in the GOP conference for Brooks’s effort, another conservative GOP lawmaker tersely replied: “Little to none.”

Some Republican House members are in the same position as Rubio is in their home districts. A bunch of them just won tight races against Democrats and will face another purple electorate in the 2022 midterms. If Brooks’s effort to partner with some Senate Republican by forcing a floor vote is successful, all of those members will be forced to take a no-win floor vote themselves. Probably several, as I assume there’ll be objections to the results in every swing state where the race was tight.

What do you do if you’re forced to cast that ballot? Embarrass yourself and the party by voting to reject, potentially angering swing voters back home? Or vote to accept the results and end up being primaried by some creature like this?

This is such a knotty dilemma for Republicans that I wonder if some Senate Democrat won’t make mischief by objecting to the swing-state results himself. In tandem with Brooks’s objection in the House, that would force a floor vote on the results. Maybe the Dems will make the GOP eat it on this even if McConnell succeeds in convincing his own caucus not to object.

NAILED IT: Ben Shapiro Comes Right Out and Says It About Biden: 'This Is Not Normal'

'Control over you is their highest priority': Here's a great thread on why Chuck Schumer's legislative priority is climate

“There were literally 85-year-old, 90-year-old people standing there in tears…”

Actually, a censure resolution for Trump in addition to impeachment isn’t a bad idea

Move the Olympics from Tokyo to Florida?

Can’t see how this could go terribly wrong