Breaking: Barr resigns. Or was he fired? 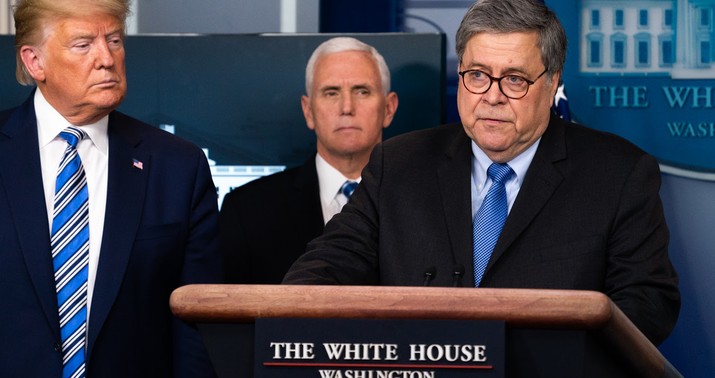 It was one week ago that the Times reported Barr was thinking of quitting before January 20. Today, at almost precisely the moment that California’s electors voted to put Biden over the top in the electoral college, Trump confirmed that the Times was right.

The timing can’t have been coincidental, can it?

A president who craves the spotlight at all times would naturally seethe at the thought of Biden having a big moment this evening as his presidential victory becomes official. Barr’s resignation is a way to muscle in on that coverage. Remember, this is a guy reportedly planning a campaign event on January 20 to counterprogram Biden’s inauguration. If he can’t bear to let Sleepy Joe have that moment in the sun alone, why would he allow him one today?

I don’t know, maybe it’s a coincidence. Click the image in the second tweet for a full-sized version of the letter.

One obvious flaw in my theory: If Barr’s resignation had been demanded today by Trump rather than offered voluntarily by the AG, it wouldn’t have been so obsequious, right? It would have been grudging. So maybe this really did happen on Barr’s initiative.

Or, per the letter’s reference to a meeting in which they discussed voter fraud, maybe Barr came armed with a resignation letter because he knew the meeting wouldn’t go well. That is, Trump might have told him “come see me, and if you don’t have good news about voter fraud that’ll stop this electoral college process then make sure you have a resignation letter with you.” So Barr did what he was told. It’s interesting to me that he went out of his way to note that he and Trump met today to discuss election fraud. The president didn’t mention that in his tweets. Why was Barr so eager for the public to know?

Was he being a good soldier to the very end, signaling to Trump fans that the DOJ is still pursuing fraud leads? Or was he hinting that the fact that he has no evidence of fraud is the reason his resignation was necessary?

In fact, as Henry Olsen notes, although Barr’s letter *reads* like a resignation letter, at no point in it does he actually, you know, resign. All he says is that, “as discussed,” he’ll depart on December 23. Did Trump fire him but agree to let Barr save a little face by drafting this letter, leaving the method of his exit deliberately vague?

Trump canning him wouldn’t be surprising. He reportedly discussed firing Barr with aides on Friday, after telling reporters on December 3 that they should ask him in a few weeks whether he still had confidence in Barr. A few days later the Times reported that Barr was thinking of jumping ship before Trump could push him out. Over the last few days stories have been published alleging that Barr has known for years that Hunter Biden was under investigation and that the DOJ deliberately kept that information under wraps during the campaign for fear of setting another Comey-esque precedent in which the FBI springs a last-second surprise on one of the two major candidates. Trump was allegedly irate, not understanding why the department would behave ethically instead of helping him win.

And now here we are. “Barr cannot be intimidated by Trump. This is the real story. None of this matters — it’s the deposed king ranting. Irrelevant to the course of justice and to Trump’s election loss,” said a mysterious source familiar with the two men’s relationship to CNN over the weekend. Today’s news could be as simple as Barr having seen the reports that Trump discussed firing him, thought “to hell with this,” and quit before Trump could follow through.

If you missed this post on Saturday, read it now, as it might explain Trump’s motive for wanting Barr out early. The president reportedly wants a special counsel appointed to investigate Hunter Biden. Barr has been resisting that idea for reasons that are unclear. The president shouldn’t be leaning on the Attorney General to investigate anyone, especially a political enemy, but what presidents are supposed to do and what Trump wants to do are two different things. Maybe he told Barr to appoint a special counsel, Barr said no, and Trump said, “Fine, then you’re out and the deputy AG, Jeffrey Rosen, is in. Maybe he’ll listen to me.”

There’s always this theory too, of course:

My suspicion, which I just shared with a friend a moment ago, is that this is really about some proposed pardons that we don't know about yet. https://t.co/1eSWS33ZCY

It’s hard to imagine what would cross Bill Barr’s red line on pardons given how shady so many of Trump’s pardons have already been. But maybe a Giuliani pardon would do it. Even Barr’s loyalty has its limits.

Update: My memory was just jogged. Remember this story from August?

Attorney General William Barr said he would be “vehemently opposed” to any attempt to pardon former National Security Agency contractor Edward Snowden, after the president suggested he might consider it…

“He was a traitor and the information he provided our adversaries greatly hurt the safety of the American people,” Barr said. “He was peddling it around like a commercial merchant. We can’t tolerate that.”

There’s been a lot of chatter online over the past week about Trump potentially pardoning Snowden and Julian Assange. Maybe the president told him today that it was happening and finally failed Bill Barr’s puke test.