Report: Barr might quit before the end of the year 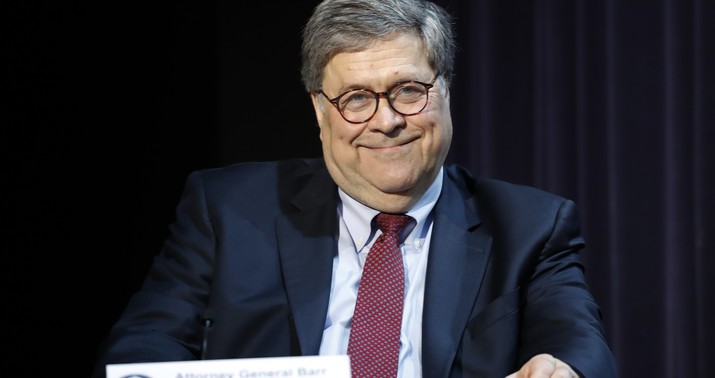 I’m grasping for some too-clever-by-half angle here in which Barr steps aside at Trump’s request so that new acting Attorney General Lou Dobbs can declare the election invalid or whatever.

But the truth is doubtless simpler and more mundane. Barr knows he’s likely to be humiliated over the next six weeks, either by getting “the full Sessions” from Trump’s Twitter feed or being ignominiously fired or both. So he’s thinking of telling Trump, “You can’t fire me, I quit.”

If you believe WaPo’s sources he’s been thinking about doing this since shortly after Election Day, before he and Trump butted heads over the alleged rampant voter fraud that Barr’s deputies somehow can’t find evidence of. But even if that’s true, it doesn’t mean Barr’s not disgruntled. Remember that Trump was leaning on him and Chris Wray to deliver an October surprise by doing something, anything, about Hunter Biden’s laptop in the final weeks of the campaign. The president had also complained publicly about the fact that the Durham report wouldn’t be published until after the election, when it would no longer be of use to him politically.

Maybe Barr’s reached his limit. From the Times:

Attorney General William P. Barr is considering stepping down before President Trump’s term ends next month, according to three people familiar with this thinking. One said Mr. Barr could announce his departure before the end of the year…

One of the people insisted that Mr. Barr had been weighing his departure since before last week and that Mr. Trump had not affected the attorney general’s thinking. Another said Mr. Barr had concluded that he had completed the work that he set out to accomplish at the Justice Department.

But the president’s public complaints about the election, including a baseless allegation earlier last week that federal law enforcement had rigged the election against him, are certain to cast a cloud over any early departure by Mr. Barr. By leaving early, Mr. Barr could avoid a confrontation with the president over his refusal to advance Mr. Trump’s efforts to rewrite the election results.

Only Barr knows for sure but my guess is that this quote from Trump on November 29 got under the AG’s skin and convinced him to speak up a few days later about how his deputies hadn’t found any significant voter fraud. It’s one thing to claim that Biden cheated; Barr was willing to facilitate that narrative in whatever small ways he could. It’s another to suggest that Biden cheated with Barr’s help. That was Barr’s cue to finally say, “Nope, no proof of fraud so far.”

Trump here suggests the FBI and the DOJ are involved in the giant conspiracy to steal the election from him.

CNN has a source who says yes, Barr’s looking for the exit because he’s tired of being demagogued by a boss whom he’s served loyally:

The source confirmed that Barr is not happy with Trump, writing that Barr “is not someone who takes bullying and turns the other cheek!”

“He has not made a final decision,” the source said…

Two White House officials told CNN that while Trump had certainly considered firing Barr, he’s being advised against it by several people.

Some lefty commentators today suspect this is all a form of kabuki by Barr, showing himself “standing up to Trump” at the last moment as he prepares to reenter Washington’s decidedly un-Trumpy professional circles. (See also Kellyanne Conway.) I wonder, though, if he’s not hanging in there for the moment in the hope that Trump will finally tire of his futile attempts to block Biden’s victory and just let the final six weeks of his term play out more or less normally. Maybe he’ll decamp to Mar-a-Lago for Christmas and never come back to the White House, just letting the government run on autopilot until January 20. Barr might stick around to the end in that case. Why not?

But if instead Trump gets more desperate as we get closer to Inauguration Day, which has been the trend thus far, Barr may fear that he’ll be asked to do something even weirder than usual, like sue to stop Congress from counting the electoral college’s votes on January 6. Then he’ll have to tell Trump no, and Trump and his media outlets will rant, and, well, who needs it? Barr’s a wealthy man and he’ll be unemployed in six weeks anyway. Better to parachute out of a bad situation than stick around and finish his tenure as righty populists’ new favorite scapegoat for Trump’s defeat.

For the moment, he’s claiming that he’s all-in:

NEW: A DOJ official tells @CBSNews that Attorney General Bill Barr intends to stay as long as President Trump needs him. Sunday NYTimes reported, “Barr Is Said to Be Weighing Whether to Leave Before Trump’s Term Ends”

Here’s an example of the treatment that awaits Barr over the next month and a half from Trump toadies. I wonder how he feels about the fact that the president would much rather have this person as Attorney General than Barr himself.