Dem rep to Pelosi: The House should refuse to seat any Republican who signed onto Texas’s lawsuit 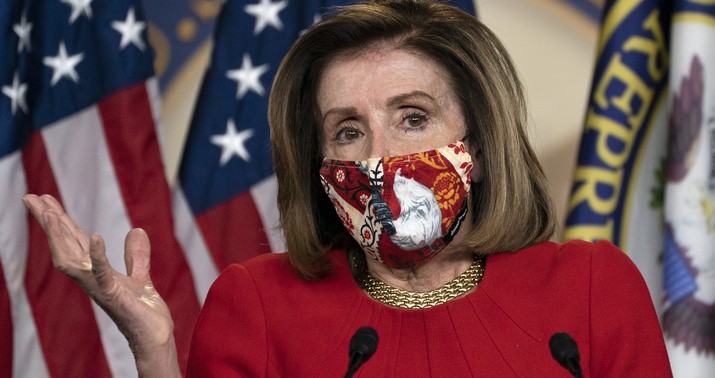 I agree with Ken White’s response to this pander by Dem Rep. Bill Pascrell: “Look, I get it, but the answer to performative pseudo-legal system-undermining nonsense is not ‘more of the same.'” If you’re defending the norm that America’s elected representatives shouldn’t try to tear the country apart, proposing a penalty that would also tear the country apart seems … counterproductive.

The text of the 14th Amendment expressly forbids Members of Congress from engaging in rebellion against the United States. Trying to overturn a democratic election and install a dictator seems like a pretty clear example of that. pic.twitter.com/VMnDfd0sFx

The members of Congress who endorsed Texas’s suit are morally unfit to hold office in the United States but moral disqualification and legal disqualification are two different things. Filing a lawsuit, however contemptible, isn’t “insurrection.” Although I do think Pascrell would have been on stronger footing if he had focused specifically on GOP reps from Pennsylvania, Michigan, Wisconsin, and Georgia who signed on to Texas’s complaint. If those representatives have no faith in the integrity of the ballots in their home states because Biden won, there’s no reason why Congress should have faith in the integrity of each of those representatives’ victories. Voters vote for president and for the House on the same ballot, after all. If these people believe that the electoral process in their home states was unconstitutional, they have no grounds to object if the House decides that their own victories can’t properly be recognized.

So why seat them?

There are now 19 GOP members of Congress who are advocating for overturning the election results *of the states they themselves represent.*

Refusing to seat all 126 Republicans supporting the suit goes too far but I sympathize with Pascrell’s frustration that not one of them will pay any political or professional price for having supported a legal effort that would end the United States as we know it if successful. “A majority of one of the two major parties would rather lose democracy than lose the presidential election,” wrote polisci prof Seth Masket last night of the Texas suit, correctly. “If elections are only legitimate when one party wins them, the [American] experiment is basically over.” And that’s really the point. Whether Texas wins or loses its suit isn’t the issue; people file pernicious lawsuits in America all the time, although a challenge asking the Supreme Court to spoil the ballots of tens of millions of voters is in a league of its own. The issue is that more than half of the Republican members of the House support that outcome.

That means the American experiment is over, win or lose. The mask is off. And even so, it won’t cost any of them a thing in terms of votes, media appearances, lobbying jobs, nothing.

The experiment is over. How it finally unwinds remains unclear, but it will unwind.

Tom Goldstein of the normally by-the-book SCOTUSblog called on the Supremes to bring down the mightiest hammer in their arsenal on this lawsuit in a post today. I hope they do, but he’s kidding himself if he believes a show of contempt by the Court will change any minds. Again, the experiment is already over.

The justices’ decision whether to do that needs to account for this extraordinary, dangerous moment for our democracy. President Donald Trump, other supportive Republicans, and aligned commentators have firmly convinced many tens of millions of people that the 2020 presidential election was stolen. If that view continues to take hold, it threatens not only our national politics for the next four years but the public’s basic faith in elections of all types that are the foundations of our society.

A simple five-page per curiam opinion genuinely could end up in the pantheon of all-time most significant rulings in American history. Every once in a long while, the court needs to invest some of its accumulated capital in issuing judgments that are not only legally right but also respond to imminent, tangible threats to the nation. That is particularly appropriate when, as here, the court finds itself being used as a tool to actively undermine faith in our democratic institutions — including by the members of the court’s bar on whom the justices depend to act much more responsibly.

Dan Crenshaw, a bona fide hero before he joined Congress and became … this, tried to explain his support for Texas’s lawsuit:

The left-wing outrage is predictably over the top. The request here is simple: allow this case to be elevated to the Supreme Court, and let the Supreme Court make a determination. All cases should be heard, all investigations should be thorough. It is that simple.

My personal hope is that drawing additional attention to it forces states to clean up their act, and adopt far better and more secure systems going forward that will garner the kind of faith in our elections our nation so desperately needs.

That’s a mighty nonchalant view to take of a case that would overturn a national election if Crenshaw’s side prevailed. He’s effectively saying “run it up the flagpole, see if the Court salutes” about a lawsuit that would invalidate four states’ presidential votes and disenfranchise voters by the millions. My question for him, for Trump, and for anyone else who supports this suit is simple: What do they imagine this country would look like if five justices did what Texas is asking? How does Crenshaw envision America 2021 in his mind if Trump is handed a second term by a conservative majority that resorted to disqualifying ballots by the millions without even finding proof of fraud?

There’d be no America for Trump to preside over. Blue states would move to secede, and they’d have a point. They’d be nuts to remain in a country that no longer permits their candidates to win national office through normal democratic means, thwarted by a ruthless, power-mad GOP and aided and abetted by a corrupt Supreme Court. It’d be a de facto autocracy. Head for the exits.

The fact that Crenshaw dismisses basic, basic, basic civic concerns like that as “left-wing” grousing is the icing on the cake. He’s taking the mantle of “defenders of American democracy” and gently draping it around the shoulders of g-ddamned progressives. Although, given how few Republicans seem to be troubled by a naked attempt to use the Supreme Court to execute a coup for Trump, you can’t knock him too much. It is *mostly* left-wingers complaining about this, to the right’s shame.

The president is pretty openly lobbying SCOTUS himself now, by the way:

You’d need to be snorting some very high-grade partisan disinformation to believe that a 50/50 Senate with Joe Manchin as the deciding vote is ready to add 25 seats to the Supreme Court. Think Amy Coney Barrett is dumb enough to believe it? Speaking of which, I’ll be surprised if we don’t learn down the road at some point that Trump wanted to *personally* lobby the Court by calling up some of the justices and pitching them on “loyalty.” That’s not to say that he has, and it’s certainly not to say that any justices would agree to take his call. But it wouldn’t occur to him how grossly unethical that would be. If it hasn’t happened, I’d guess it’s because he ran the idea by some friend or aide and was told, “Uh, don’t do that. Seriously.”

Nate Cohn has a nice thread today on why, ironically, Texas itself provides some of the best evidence that Biden’s wins in Georgia and the Rust Belt were legit. It’d be suspicious if those were the only states where Sleepy Joe had made gains this year, but they weren’t by a long shot. He improved on Hillary’s performance in various states across the map, including … Texas. In fact, his gains there were bigger than in some of the states whose elections are being challenged.

Biden improved by 3.4 points over Clinton's performance in the state–a larger improvement than his gains in any of PA/MI/WI.
He did so despite suffering big losses among the state's Latino voters–a group that represents a sliver of the vote in PA/MI/WI

If there's any irregularity, maybe that's it? It is a little hard to explain why Biden did quite so poorly in the Midwestern battleground states