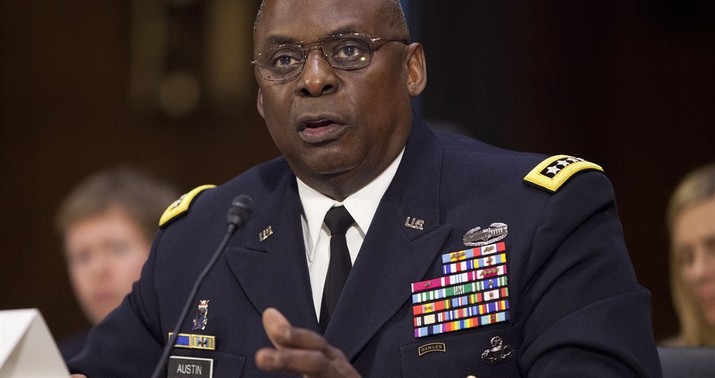 A leftover from a few days ago. They were all set to try to shepherd Michele Flournoy through to become the first woman defense secretary, the Daily Beast reports — and even Flournoy herself had begun gladhanding legislators behind the scenes in the expectation that she’d soon be facing them in a confirmation hearing.

Instead Biden dropped Lloyd Austin on them and gave them an entirely new political problem, gathering enough votes in both houses of Congress to secure a waiver to the law banning military officers from leading the Pentagon unless they’ve been retired for seven years.

It remains unclear today whether Austin will have the votes he needs for that waiver, particularly at the committee level.

Now Biden’s Democratic allies on the Hill, many of whom rejected such a waiver in 2017 for former Defense Secretary Jim Mattis to serve, are in the uncomfortable position of eroding an institutional safeguard ensuring civilian control of the military on behalf of a figure few know and fewer saw coming. One staffer for a member of the House Armed Services Committee, who did not want to be named, called the announcement a “clusterfuck.” Another Democratic aide called the situation a “hot mess.” And it is jeopardizing what should be a historic moment: the nomination of the first Black secretary of defense.

A great deal of the confusion stemmed from a widespread expectation, shared by many on the Hill, that former Undersecretary of Defense Michele Flournoy was the likelier choice to run the Pentagon. In fact, Flournoy was still personally courting skeptical Democrats on the Hill just days before the Austin news broke, according to a Democratic aide. Not to mention, many of the Democratic Party’s bench of defense experts, from whom Austin is likely to staff his Pentagon should he get that far, are Flournoy’s proteges and loyalists.

Austin is an understandable pick in some ways, a curious one in others. He and Biden worked together during Obama’s administration, which seems to be a credential of utmost importance to Sleepy Joe as he assembles a cabinet of retreads. And he’d check a major diversity box for the administration by becoming the first black SecDef in U.S. history. But he has liabilities even beyond the ones I’ve noted in other posts this week, lack his inexperience with the Far East at a moment when China has emerged as America’s greatest threat. The Free Beacon flagged this uncomfortable episode from Austin’s military service in a post on Wednesday:

Austin, CENTCOM commander from 2013 to 2016 and Biden’s pick for defense secretary, publicly claimed that the Obama administration was making “significant progress” against ISIS in fall 2014—just when the terrorist organization was reaching its largest territorial extent. Austin also told Congress that ISIS “is losing this fight” in March 2015, two months before terrorists captured Ramadi, a key city just miles from Baghdad.

The Department of Defense inspector general ultimately cleared CENTCOM commanders of politicizing the battle against ISIS, but its 2017 report noted, according to witnesses, Austin had pushed his subordinates to paint a rosy picture of the situation. The witness accounts are consistent with contemporary news accounts, which found that CENTCOM officials regularly altered language in intelligence reports.

Congressional probes conducted by Republicans *and* Democrats at the time concluded that CENTCOM’s intelligence process was making it harder for bad news to make its way up the chain. In fact, when Austin testified before the Senate in 2015, he got under John McCain’s skin by seeming far too sanguine about ISIS’s expansion in the region. “There haven’t been any dramatic gains on either side,” Austin claimed — despite the fact that ISIS had captured Mosul. “I’ve never seen a hearing that is as divorced from the reality of every outside expert and what you are saying,” McCain replied.

Is the new SecDef going to put on rose-colored glasses when he briefs Biden too?

Matt Continetti’s right that Austin’s nomination also guarantees “a replay of the debate over America’s 2011 withdrawal from Iraq and the subsequent growth of the Islamic State.” Austin was the commander in Iraq who supervised that retreat, clearing the way for ISIS to emerge. That’s not his fault, obviously — Obama gave the order, not Austin — but it’s destined to lead to awkward questions during Austin’s hearing about whether he disagreed with the order at the time and whether he thinks the Obama/Biden administration’s eagerness to leave Iraq was a mistake in hindsight.

His biggest liability is his lack of expertise on China, though. He can’t get his waiver without some Republican votes and the GOP has become a party of staunch hawks towards Beijing. It’s the big gap on his resume and it’s unclear how he’ll fill it. “The United States doesn’t have a clear strategy for dealing with China, and it doesn’t currently have the right weapons for the job,” David Ignatius writes today. “Preparing for this adversary means a rethink, top to bottom. It’s the biggest management and technology challenge the new administration faces. If Austin is the right person to lead this transformative effort, he needs to show it.” We won’t know until the Georgia runoffs who controls the Senate Armed Services Committee but we already know that no fewer than four Dems who sit on it oppose a waiver — Richard Blumenthal, Elizabeth Warren, Tammy Duckworth, and Kirsten Gillibrand — while a fifth, Mazie Hirono, has “concerns.” How many Republicans on the committee will cross the aisle for Austin?

At least one will. Jim Inhofe, the committee chairman, says he has no problem granting waivers. But Tom Cotton is also on the committee and has expressed “real reservations” about granting another waiver. Josh Hawley’s on the committee too and won’t want to vote for any Biden nominees unless he has to, as he and Cotton both have presidential aspirations and know that greenlighting a Biden pick can and will be held against them in a primary. There’s real suspense, at least for the moment, on whether Austin has the votes.

But when push comes to shove, I assume most Dems will roll over and vote yes in order to spare Biden a stinging humiliation so early in his presidency. There’s no obvious alternative to Austin either who checks the diversity box that he checks, as Jeh Johnson (who was also being considered for SecDef) said a few days ago that he won’t take a job in Biden’s administration. It’s Austin or bust. Senate Democrats won’t choose bust and Austin hasn’t given Republicans any sort of culture-war reason to galvanize a party-line vote against him. He’ll make it through. Whether he’s ready for China is a separate question.

Report: Impeachment trial may be as quick as three days

BREAKING: Biden decides to stick with Wray at FBI

'I can die happy now': Conservative tweeter is rightfully beaming after featuring John Brennan in 'the best mashup of my life' [video]

Long before the contract is up

Pelosi: There’s no question that certain House members gave “aid and comfort” to the “stop the steal” campaign

“If people did aid and abet … there’ll be prosecutions.”

More NYC landlords being driven out of business by the government