So SCOTUS is going to be the scapegoat, huh? Update: 17 states join Texas suit 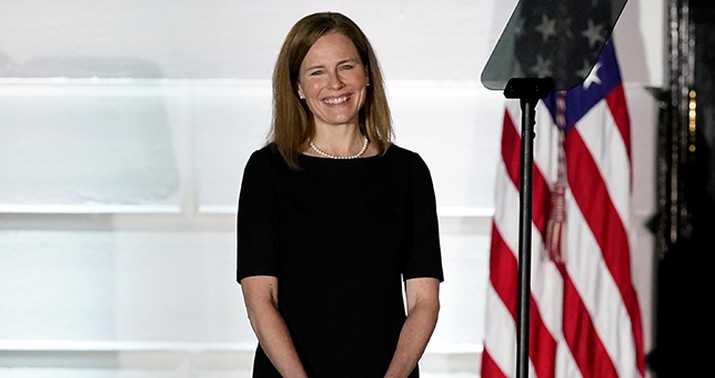 I’ve always assumed it was Rudy’s and Jenna Ellis’s plan to offload blame for Trump’s legal failures onto SCOTUS. Ellis in particular has crowed in a just-you-wait fashion that the president’s fortunes will change once their lawsuits are in front of the Supreme Court. That’s clearly not true, but it has the welcome effect for her of redirecting MAGA fans’ expectations away from her and Giuliani and towards Gorsuch, Kavanaugh, and Barrett.

I mean, if SCOTUS swats Trump down, surely that’s not due to poor lawyering or weak evidence of fraud. It’s due to “disloyalty” by the president’s Supreme Court appointees.

What I didn’t anticipate was that Trump himself would try to set up the Court to take the blame for his failure to get the election overturned. I thought he’d mostly given up on his legal challenges in order to focus on pressuring state legislatures to pull off a soft coup for him by invalidating their election results.

Nope. These tweets make it sound like he’s betting everything on that ridiculous Texas lawsuit that Ed wrote about yesterday.

This was not my case as has been so incorrectly reported. The case that everyone has been waiting for is the State’s case with Texas and numerous others joining. It is very strong, ALL CRITERIA MET. How can you have a presidency when a vast majority think the election was RIGGED? https://t.co/ZKu9sNVz2U

There is massive evidence of widespread fraud in the four states (plus) mentioned in the Texas suit. Just look at all of the tapes and affidavits!

We will be INTERVENING in the Texas (plus many other states) case. This is the big one. Our Country needs a victory!

“This is the big one.” Is it? He was surprisingly restrained last night after the Court rejected Mike Kelly’s request for an injunction to block Pennsylvania from certifying its results on grounds that the state’s mail-in ballots were invalid. I thought that was the “big one” people were waiting for, or at least the closest thing to a “big one” in this ongoing legal shambles.

But now here’s the president putting all of his chips on the complaint filed with SCOTUS by Texas AG Ken Paxton, a suit so dubious that Texas’s solicitor general wouldn’t even put his name on it. It was widely assumed yesterday that the only reason Paxton filed it was because he’s in serious legal trouble himself and is hoping to receive a “get out of jail free” card from Trump before January 20. That is, the complaint isn’t so much a serious legal grievance as a type of bribe to Trump, signaling Paxton’s “loyalty” in a public way in hopes of getting a tangible benefit in return.

Does this read like a complaint whose authors are taking it seriously?

Did Texas proofread the massive documents it filed in SCt to block Biden victory: on key point, it says it is challenging 4 states' combined 72 electoral votes, but those 4 only have 62: Pa. 20, Ga and Mich 16 each, Wisc 10.

The suit also relies in part on the testimony of Mellissa Carone, who went viral online last week after her appearance at a hearing in Michigan. It’s since come out that she’s been in trouble with the law within the past few years and a Michigan judge deemed her testimony not credible. This is the lawsuit that’s going to save Trump’s presidency?

Enter Paxton’s complaint. It makes a slew of audacious factual allegations that are unestablished and untested. Basically, he argues that the state defendants shouldn’t have allowed mail-in balloting the way they did, and cites “mysterious late night dumps of thousands of ballots at tabulation centers; illegally backdating thousands of ballots,” and videos of “poll workers erupting in cheers as poll challengers are removed from vote counting centers,” among an avalanche of other unsubstantiated and previously repudiated factual claims. (My favorite is the “expert analysis” that allegedly calculated the “probability of former Vice President Biden winning the popular vote in the four Defendant States” as “less than one in a quadrillion, or 1 in 1,000,000,000,000,000.”)…

Paxton is asking five unelected justices with jobs for life to cancel the millions of votes legitimately cast in four states, and tell the legislatures in those states to give the electors to Trump. (Even Ted Cruz only wants to wipe out all the votes from just one state.)

This is a wholesale assault on “We the People”—citizens of a country founded on principles of self-government. And it’s an assault on the sovereignty of fellow states. Truly breathtaking.

If SCOTUS were inclined to throw out millions of votes wholesale, it wouldn’t have given Kelly’s Pennsylvania lawsuit the back of its hand. The last 35 days have been relentlessly distressing and frightening in demonstrating how many Americans would support canceling elections retroactively just because the results went against their candidate, but the justices of the Court aren’t among them. They know that doing so would mean the end of the American experiment and they’re not willing to pull that trigger even if 50 million or whatever Trump voters are. Paxton’s lawsuit is DOA. And every Republican in government knows it except possibly Trump, whose grasp on reality is always tenuous thanks to the quality of information he consumes and the peculiarities of how his mind works.

I promise, though, every Republican in Congress knows this is a dead end. Yet even so:

Email to every member of House GOP from ⁦@RepMikeJohnson⁩, R-LA, soliciting signatures for an amicus brief in the longshot Texas lawsuit seeking to invalidate electoral college votes from GA MI PA and WI. Trump is “anxiously awaiting the final list” to see who signs on. pic.twitter.com/QrksypyHv9

Note the bit about Trump awaiting the “final list.” This is another loyalty test in an endless series of them, and the thing about Trump’s loyalty tests is that you only need to fail one to lose favor forever. That’s why so many members of Congress refused to say last week that Biden won the election when asked, never mind that Trump’s own administration has begun the formal transition process. All you need to do is fail once. So when he asks if you’re willing to join Ken Paxton’s garbage, possibly corrupt, go-nowhere lawsuit, the answer is yes. If you value your job, at least.

For fark’s sake, even Kelly Loeffler and David Perdue are backing Paxton’s lawsuit even though, if it succeeded, it would mean that an AG from another state had prevailed in disenfranchising their own state’s voters. Yet another reason, in case more were needed, that the two of them are unfit for office.

There’s one wrinkle in Paxton’s suit worth noting. He’ll lose this case without question but he *might* succeed in getting the Court to hear it. That’s because suits in which one state sues another are matters of original, not appellate, jurisdiction for the Supreme Court. The Court can always refuse to hear an appeal, but some justices are of the belief that it must hear cases asserting original jurisdiction. We’ll find out just how many when the Court finally rules on Paxton’s complaint, but it’s likely to be a few:

In other words, even if the Court dismisses the complaint, we might see Thomas and Alito (and one or two others) note their dissent — not because they thought Paxton was right about fraud but because they thought they were bound to take the case and give him a trial under procedural rules.

But maybe Trump is going to screw that up?

The central purpose of #SCOTUS’s “original” jurisdiction is for disputes between states that can’t be resolved elsewhere.

Successful intervention by another party would prove that the dispute *could* be resolved elsewhere — and that there’s nothing unique about Texas’s claims. pic.twitter.com/lZ1AB9kNWE

However this matter proceeds, Paxton will lose. Maybe he’ll have his complaint trashed or maybe the Court will feel it has no choice but to dutifully hear his case before flushing it, but the outcome isn’t in doubt. And when SCOTUS rejects the “big one,” as Trump calls it, he and some of his fans are going to go all-out demagoging Gorsuch, Kavanaugh, and Barrett for not having swallowed Paxton’s nonsense in the name of giving Trump a second term. SCOTUS is the scapegoat. That’s the way this ends.

I’ll leave you with a tweet and a quote. The quote comes from the Republican majority leader of the Pennsylvania state senate, discussing that letter to Congress that other Pennsylvania Republicans signed asking Congress to toss out its state’s electoral votes(!). Would she have signed the letter if given the chance, the NYT asked her? To which she replied, “If I would say to you, ‘I don’t want to do it,’ I’d get my house bombed tonight.” Sounds to me like she’s very much in tune with the “fascism-curious” nature of her base and is willing to indulge them as a matter of self-interest, just like Loeffler and Perdue and nearly every other politician in this morally bankrupt party. As for the tweet below, it’s self-explanatory. The most influential purveyor of anti-American propaganda on planet Earth isn’t the Chinese government anymore, and even the Chinese government knows it. Great, great, great work.

Update: The important thing now is to show you’re a “team player” by joining Texas’s lawsuit, never mind that the GOP is supposed to be the “states’ rights” party.

A *lot* of this brief is an argument that the 17 states that are not GA, MI, PA and WI don't like the voting rules that were adopted in GA, MI, PA and WI because they don't think they're rigorous enough. It'd be, err, unprecedented, to let states sue each other for that. pic.twitter.com/zN6il7UMv7