Arizona GOP: Are you willing to give your life in this fight? 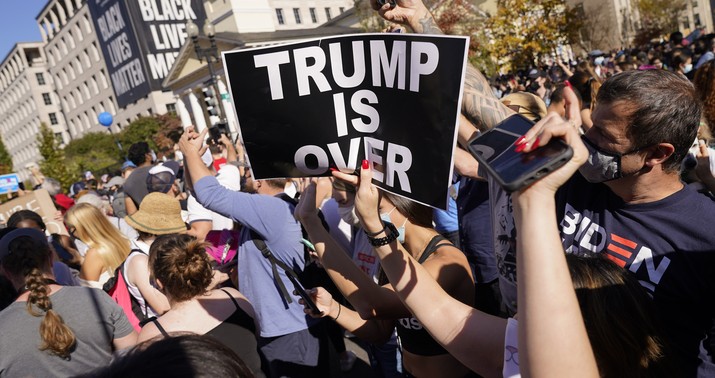 The type of gutter trash that would post something like this will never grasp that the growing crankishness of the GOP under Trump is part of the reason he lost last month.

A politician as old and stale as Joe Biden wouldn’t come anywhere near 80 million votes under normal circumstances. To get turnout like that for a figure as bland as him requires strong exogenous factors motivating people to vote. And one of the strongest on November 3 was the fear that some parts of the Trumpified GOP have become a bit too, shall we say, fascism-curious.

Not a day has passed since Election Day that hasn’t affirmed that suspicion. Some days it’s the president dialing up state legislators and asking them to void their elections. Other days it’s state election officials being deluged with death threats or intimidated in their homes. On one day it was the former National Security Advisor of the United States calling for martial law and an election do-over.

Today it happens to be the state party in Arizona casually inciting Republicans to violence with cutesy li’l Rambo memes.

Eventually someone out there who’s taking all of this “stop the steal” nonsense very seriously will act on that incitement. There’s no law of political gravity that says only leftists like James Hodgkinson can be driven to kill by their vilification of the other side. The difference is that, after Hodgkinson shot several Republican congressmen, Bernie Sanders could honestly say that he’s never called for violence against his opponents. What’ll the Arizona GOP say?

Here’s the party in microcosm at this specific moment in time:

…And it’s not normal when a sitting Senator is forced to retire because his Arizona poll numbers were so low that he would have come out dead last in the Republican Primary, and had zero chance of winning the general election. Great job Jeff! https://t.co/5kbOQIpstq

That’s Jeff Flake complaining about Trump trying to orchestrate a “soft coup” by pressuring Pennsylvania legislators into voiding the results of their election and the only counterpoint Trump has is “ha ha, you’re unelectable.” As I say: Fascism-curious.

And awkward too, as the Arizona GOP hasn’t been a model of electoral success since Flake retired. Martha McSally lost to Kyrsten Sinema and then to Mark Kelly, leaving the home state of Barry Goldwater and John McCain with two Democratic senators for the first time in decades. Trump himself came up a few thousand votes short there against Sleepy Joe Biden last month. Flake may be unelectable in Arizona but the Trumpified GOP isn’t doing so hot either. I wonder if that was on Doug Ducey’s mind when he sent the president to voicemail while certifying his state’s results a few weeks ago.

Trump’s tweet is also ironic in that it implies that winning elections is something the GOP base cares deeply about. Right now the most popular people on the populist right apart from Trump himself are Lin Wood and Sidney Powell, both of whom have called on Georgians to stay home in the January 5 Senate runoffs. Trump lost the popular vote twice and the electoral college once and yet the cult of personality around him seems stronger than ever. A state party that cared about winning elections wouldn’t be posting inflammatory garbage about dying for a cause on its Twitter feed for fear of scaring off moderates. That’s the sort of thing you do when you view yourself as part of a cultural grievance movement, not a political party aiming to win power in order to institute certain policies that’ll improve the country. And that’s the divide the GOP will need to manage over the next few years, a split between people who subscribe to a right-wing policy agenda they’d like to advance and people who want to fight Trump’s enemies, be it the left, the RINOs, whoever. All of which will suit Trump just fine, notes A.B. Stoddard:

Angry and afraid people fighting—over him—is the very top of his hierarchy of needs. It’s his version of self-actualization. And while he may be forced to give up the office of the presidency, he will not give up being at the center of this storm. Republicans don’t seem capable of understanding where this eventually leads. So let me spell it out for them:

Donald Trump is going to destroy their party.

Not because he wants to or even because he’s trying to. But because the destruction of the GOP will be required in order to fill his psychological needs…

What Mitch McConnell and company don’t seem to understand is that this is the endgame: The MAGA cult no longer sees Democrats and the media as Enemy Number One. The Republicans who aren’t legally permitted to deny reality are now the big threat. And Trump is going to spend the next two—or four—years at war them.

Stoddard published that yesterday. As if to prove her point, here’s the latest tweet from the president as I write this:

Governor Kemp (@BrianKempGA) is down 18 points in a recent poll. Don’t believe it, must be more!

“Trump blows a hole in the GOP on his way out,” Politico entitled a story today. “State party chairs are tearing into their governors. Elected officials are knifing one another in the back. Failed candidates are seizing on Trump’s rhetoric to claim they were also victims of voter fraud in at least a half dozen states.” From day one, he’s been the chaos candidate. The party embraced him, and now it has chaos. Every bit is richly earned.

Here’s former CISA chief Chris Krebs, who debunked Trump’s bogus theories of election fraud before he was fired and then had to go into hiding after the resulting demagoguery from some righties predictably led to death threats. Krebs filed a defamation lawsuit against Joe diGenova today because of diGenova’s recent comments on Newsmax calling for Krebs to be “drawn and quartered” and “taken out at dawn and shot.” Krebs will probably lose that suit, but one sympathizes with him for wanting someone who’s incited violence against him to suffer some sort of legal or professional consequence for it. That’s arguably the singular distinction of the Trumpified GOP: There’s really no price to be paid within it for being fascism-curious. Being fascism-skeptical, as Krebs is, is when you need to watch out.