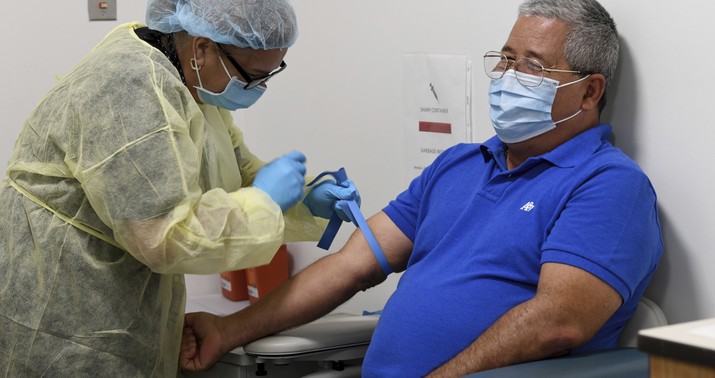 It’s still a two-shot regimen, but you don’t need to wait for the second shot before you begin reaping the immunological benefits. Ten days after your first dose, you’ll already have a solid defense against the virus. Which means once vaccinations really start rolling across the U.S. we should start seeing case counts drop almost immediately.

*If* vaccinations really start rolling across the U.S., I guess I should say. Thanks to the White House’s baffling refusal to purchase more than 100 million doses of Pfizer’s product, it’s an open question when most of us will have access to this miracle of science.

Maybe we’ll get stuck with Oxford vaccine instead. That one’s 70 percent effective on average according to the final data published today, not 90+ percent like Pfizer’s and Moderna’s products are.

Anyway, today’s news from the FDA is wonderful in two ways. One, obviously, is that the Pfizer vaccine provides protection quickly after one dose. The other is that, if they’ve reached this conclusion, they must be tantalizingly close to issuing an emergency use authorization for the vaccine. It won’t be long now…

New coronavirus cases quickly tapered off in the vaccinated group of volunteers about 10 days after the first dose, according to one graph in the briefing materials. In the placebo group, cases kept steadily increasing…

The efficacy of the vaccine after the first dose is about 52 percent, according to Dr. William C. Gruber, senior vice president of Pfizer Vaccine Clinical Research and Development. After the second dose, that rises to about 95 percent. “Two doses of vaccine provide maximum protection,” he said.

Many experts have expressed concern that the coronavirus vaccines might protect some people better than others. But the results in the briefing materials indicate no such problem. The vaccine has a high efficacy rate in both men and women, as well as similar rates in white, Black and Latino people. It also worked well in obese people, who carry a greater risk of getting sick with Covid-19.

Some vaccines for other diseases set off a weak immune response in older adults. But Pfizer and BioNTech found that people over 65 got about as much protection from the coronavirus vaccine as younger people did.

The second dose doesn’t just increase the Pfizer vaccine’s efficacy, it likely makes the immunity one enjoys from infection more durable. Taking all the data under consideration, an immunologist at Yale called it an “A+ report card.” The one catch: Standard vaccine symptoms like fatigue and achiness were prevalent enough after the second dose that you might need a day off of work to recover after receiving it. Bummer, but beats being on a ventilator.

Speaking of which, the UK’s vaccination drive has officially begun. Among those to receive the shot today: 81-year-old William Shakespere. No fooling. The very first recipient was a 90-year-old grandmother, the very model of a stiff-upper-lip Briton:

Keenan, who turns 91 next week, said she felt “privileged” to be the first to get the shot.

“It’s the best early birthday present I could wish for because it means I can finally look forward to spending time with my family and friends in the New Year after being on my own for most of the year,” she said, according to a statement released by the UK’s National Health Service (NHS)…

“This is for a good cause so I’m so pleased I had it done. This is a terrible, terrible disease so we do want rid of it,” she added.

Keenan advised others eligible for the vaccine to take up the offer: “I would say go for it,” she said. “If I can do it, well, so can you.”

If you lived through the Blitz and the very real prospect of a Nazi invasion, no vaccine’s going to faze you.

Meanwhile, we’re now a day removed from the news that the Trump administration declined Pfizer’s offer to purchase more than 100 million doses and it’s still unclear to me why. Per the AP, the government’s initial deal with the company gave it the option to buy another 500 million doses on top of the first 100 million; it declined to exercise that option over the summer, which means now it may have to wait to place a second order. What I didn’t know until I watched this Scott Gottlieb clip this morning, though, was that apparently Pfizer gave the feds another chance to exercise its option after the interim data came out showing how effective the vaccine seemed to be.

Why would you decline to order more doses of a vaccine knowing that it got an A+ on its report card? Especially when other manufacturers, like Oxford and AstraZeneca, may only deliver a B+?

Pfizer board member @ScottGottliebMD on the report US declined to purchase additional doses: "$PFE did offer an additional allotment coming out of that plan … multiple times and as recently as after the interim data came out and we knew this vaccine looked to be effective." pic.twitter.com/VFC4evF8Ay

All I can think is that the feds are prioritizing speed over efficacy to some degree. They can get shots into arms more quickly by contracting with five or six different manufacturers. If you go all-in on Pfizer, you’re stuck waiting day after day as Pfizer produces more doses. If you order from Pfizer *and* Moderna *and* Johnson & Johnson *and* Sanofi, etc, that’s four outfits that are all cranking out doses simultaneously.

I can understand that logic. But it’s going to create problems if, say, the Sanofi vaccine is only 50 percent effective. Would you rather get that one or wait for a new batch of Pfizer’s vaccine to become available? If Americans end up being “picky” about which specific vaccine they’re willing to get, it’ll slow down the vaccination process.

When someone offers to let you buy more of an A+ product that you desperately need, the answer is usually yes.

Trump is hosting a “vaccine summit” today — which Pfizer and Moderna won’t attend, as it would look bad for them to be gladhanding the president at a moment when their vaccines are pending before the FDA. He’s going to sign an executive order too that will prioritize delivery of the vaccine to Americans before other countries receive it, which is a nice bit of nationalist PR but ultimately may have no legal effect. If he wants the U.S. to jump the line for Pfizer’s and Moderna’s product ahead of their foreign purchasers, he could invoke the Defense Production Act, maybe. But foreign governments will be irate at seeing the White House try to elbow its way in front of them after Trump’s administration declined to place a bigger order when it had the chance. Vaccine disaster or diplomatic disaster? Those may be our choices.

I’ll leave you with this enjoyable interview from the UK today. It’s a shot in the arm — so to speak.

Martin Kenyon, a 91-year-old UK resident, received a dose of Pfizer’s Covid-19 vaccine today and says he hopes to hug his granddaughters soon.

“I want to live a long time to enjoy their lives,” he said. “No point in dying now when I have lived this long, is there?” pic.twitter.com/ABi8q6nmLi

'My mom deserves to go to jail': Claudia Conway responds to the leaked photo on the @KellyannePolls account

No, Palm Beach International Airport will not be re-named after Donald Trump

What about his presidential library?