Report: White House passed on chance to buy more vaccine doses from Pfizer, which now has commitments to foreign countries 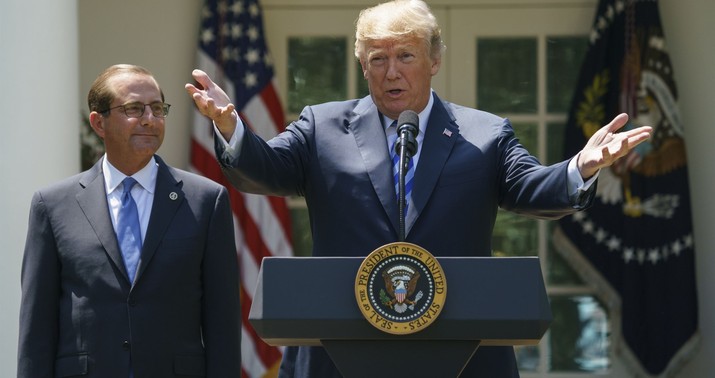 There has to be more to this story. Team Trump is all about making sure Americans get first crack at vaccines once they’re available, or so one would assume. (America first!) Obviously they’re not limiting the number of doses they purchase out of a feeling of altruism towards U.S. allies, to make sure Europeans get their “fair share” of what Pfizer’s churning out.

So why would they decline an opportunity to buy more doses, knowing full well that foreign governments would be moving in to stake their own claims to the scarce and precious resource that is Pfizer’s vaccine supply?

I don’t understand, and neither does the NYT:

Trump administration officials passed when Pfizer offered in late summer to sell the U.S. government additional doses of its Covid-19 vaccine, according to people familiar with the matter. Now Pfizer may not be able provide more of its vaccine to the United States until next June because of its commitments to other countries, they said…

On Nov. 11 — two days after Pfizer first announced early results indicating that its vaccine was more than 90 percent effective — the European Union announced that it had finalized a supply deal with Pfizer and BioNTech for 200 million doses, a deal they began negotiating in months earlier. Shipments could begin by the end of the year, and the contract includes an option for 100 million more doses.

Asked if the Trump administration had missed a crucial chance over the summer to snap up more doses for Americans, a spokeswoman for the Department of Health and Human Services said, “We are confident that we will have 100 million doses of Pfizer’s vaccine as agreed to in our contract, and beyond that, we have five other vaccine candidates.”

What are we doing about the other 70 percent? Note that, as it did with Pfizer, the EU has also purchased more doses from Moderna (160 million) than the U.S. has, meaning that there are foreign commitments in that case too that should also slow that company’s ability to supply a later round of vaccines ordered by Uncle Sam.

Declining to buy more doses from Pfizer can’t be a cost thing, as money is no object in ending the pandemic as soon as possible. Is it a matter of spreading the wealth around? Back in August, Reuters noted that in addition to its deal with Moderna, the U.S. also had purchase deals with AstraZeneca, Johnson & Johnson, and Sanofi. Put those orders together with the orders from Pfizer and Moderna and it adds up to more than 500 million doses, enough to cover about three-quarters of the population.

That’s the best I can do to explain why the White House declined Pfizer’s offer, that they already had their bases covered with other manufacturers. The not so minor problem is that there’s no guarantee that those other vaccines will be as effective as Pfizer’s and Moderna’s are, assuming that they’re effective at all. (AstraZeneca is partnering with Oxford and it is indeed an open question whether that vaccine is as effective as Pfizer’s.) The White House couldn’t have known when it turned down Pfizer this summer that its vaccine would prove more than 90 percent effective, but presumably it could have contracted for that eventuality with the company. E.g., an option to purchase an additional 100 or 200 million doses once it saw the data from the clinical trial.

Seems like now we’re stuck waiting on those other companies to release their own data to see if we’ve negotiated ourselves into a bum deal here. If 100 million people end up being vaccinated with the Pfizer/Moderna product that’s 90+ percent effective and another 100 million have to settle for a product that’s, say, 60 percent effective, questions will be asked why we didn’t stock up on Pfizer and Moderna’s product by negotiating options to purchase more doses.

The Times story mentions that Trump is preparing to sign an executive order that would “ensure that United States government prioritizes getting the vaccine to American citizens before sending it to other nations,” but surely that doesn’t mean they’re going to try to stop Pfizer and Moderna from fulfilling their contracts with foreign governments. The order seems like a nationalist fig leaf to distract from their inexplicable decision not to buy more from Pfizer. We’re putting Americans first in principle! We’re just … not actually doing it when we have the chance to place orders.

June is a long time to wait for more of Pfizer’s vaccine, especially if it ends up being one of only two that are highly effective against the virus. In fact, Pfizer’s already having trouble with its supply chain, which may mean the vaccination process will be slower than everyone expected even in the best-case scenario. Now, on top of that, it may be that we end up having to wait in line behind Europeans for our second batch.

“Scaling up the raw material supply chain took longer than expected,” a company spokeswoman said. “And it’s important to highlight that the outcome of the clinical trial was somewhat later than the initial projection.”…

Pfizer on Nov. 9, in announcing the vaccine candidate the company and BioNTech had developed had proven more than 90% effective in preventing Covid-19 in trial participants, said it expects “to produce globally up to 50 million vaccine doses in 2020 and up to 1.3 billion doses in 2021.” That was a step back from its earlier projections for output by the end of the year.

“We were late,” said a person directly involved in the development of the Pfizer vaccine. “Some early batches of the raw materials failed to meet the standards. We fixed it, but ran out of time to meet this year’s projected shipments.”

Initially they had hoped to crank out 100 million doses globally by the end of the month, now they’re aiming for half that amount. By next week, Pfizer may have only 6.4 million doses available for Americans for the initial round of vaccinations, enough for less than one percent of the population. Operation Warp Speed had aimed to ship 300 million doses of all available vaccines to U.S. states before year’s end. As it is, they’re looking at something like 35-40 million doses. The logistical difficulties are problematic enough without having to worry about other nations taking priority over us in fulfillment.

If a Democratic administration had declined to purchase more doses when it had the chance my suspicion would be that they were practicing “internationalism” with the vaccine — i.e. they thought it would make for good diplomacy to make sure that our allies had some of the product before every American was vaccinated. Nationalists would have been irate about that; in any event, it surely isn’t Team Trump’s rationale for passing on buying more doses. So what’s the rationale? What happened here?

WaPo columnist: My goodness, conservatives are “distressed” over a Tubman $20 bill

At the same newspaper that debunked the entire premise of the argument?

Nikki Haley on insurrection and impeaching Trump: Come on, give the man a break

“What happened on January 6 was not great.”

The Most Important Question About the 2020 Election

This, however, changes nothing

Operation Warp Speed staff: We had 300-plus meetings with Biden’s team reviewing the plan

US Attorney in Philadelphia retires, citing “disastrous course” of violent crime in city

Kenney doesn’t get it