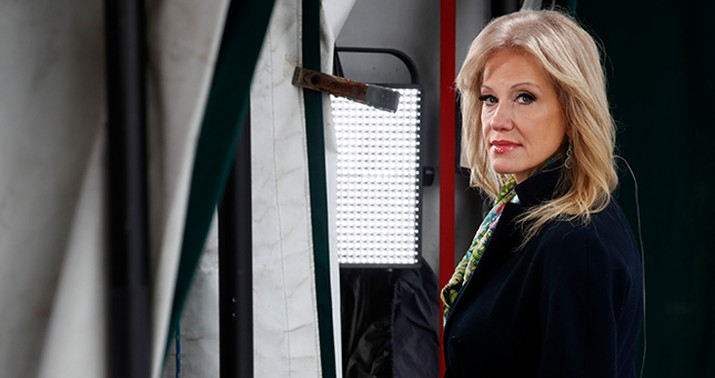 Ed sent me the link to this story earlier with the message, “GEORGE GOT TO HER.”

He was joking, of course.

But no, really, I think George might be holding her at gunpoint just out of frame in this video:

She sounds surprisingly conciliatory and sensible there. Maybe she’s making a hardheaded professional judgment in doing so. Conway came to the Trump campaign as a longtime Washington swamp-dweller, after all, someone who’d worked for a Ted Cruz Super PAC before signing on with the president. With Trump on his way out, it’s time for her to get back into elite D.C.’s good graces by distancing herself from his voter-fraud hysteria.

Or maybe she had a twinge of conscience about what that hysteria has led to, and is leading to?

I’m told by a senior Georgia official that there have been a number of threats today against elections staffers and at least one state legislator after yesterday’s hearings, and some are pushing House Republicans to postpone another round of elex hearings until January. #gapol

One could argue that Trump and his legal team aren’t responsible for the actions of their most warped admirers but it’d be easier to make that argument if they pretended that they cared. The president’s been asked repeatedly, including by election officials in Georgia, to try to stop the harassment by forcefully denouncing it. He won’t. Some of his cronies are even encouraging it:

Yes, the president is personally responsible.

I doubt America has ever had an episode like the one we’re enduring right now in which the president and his allies don’t make even a pretense of decency in their desperation to get what they want. Brad Raffensperger could be murdered and a “Trump 2020” flag left draped over his body and the most we’re apt to get from the White House is a dry one-sentence statement about how Trump “disavows” violence. Then he’ll go right back to singling out his political adversaries as “enemies of the people” on Twitter.

In light of the tweet above, you’re free to interpret the last line of this one however charitably or uncharitably you like:

I’m ashamed of them.

They completely misled the President and me.

All of us Republicans let them know what we think of them.

Jim Geraghty has a piece today titled “Stop Lin Wood and Sidney Powell Now, or They Will Control the GOP’s Destiny.” But that’s what Trump wants, isn’t it? Not “control,” maybe — that’s for him and him alone — but what evidence is there that the president considers Wood and Powell a bad influence on his fans? His only point of disagreement with them is that he thinks Georgia Republicans should turn out to vote for Kelly Loeffler and David Perdue on January 5. That 46-minute speech he released a few days ago was every bit as conspiratorial as anything Wood or Powell has said.

Which, in hindsight, makes it even harder to believe that he fired Powell as his lawyer because her theories of voter fraud were too nutty for him, as has been claimed. He fired her because she implicated Loeffler in the fraud, putting Loeffler’s chances of winning her Senate runoff in jeopardy. That’s the only reason. Apart from that, I doubt a word has escaped Powell’s or Wood’s lips since this fiasco began that has seemed to Trump to cross a line. Remember the cardinal rule: So long as you praise him, as Powell and Wood do, you can behave as badly as you want and he’ll never oppose you. He might “disavow” you perfunctorily, if there’s a lot of political pressure on him to do so, but it’ll be clear as day that he doesn’t mean it. Geraghty:

If significant numbers of Republican voters choose to not participate in the January 5 runoff elections for both Senate seats, and that leads to victories by Jon Ossoff and Raphael Warnock, that will do nothing for Donald Trump, Trump’s legacy as president, the Republican Party, and the cause of conservatism.

It will, however, do a lot for Lin Wood and Sidney Powell, who would instantly become major power brokers in the Republican Party. They could take their “your vote was stolen by rigged machines” conspiracy-theory schtick to any state in the union and hold don’t-get-out-the-vote rallies for any race, telling Republicans that the elections are fixed and that participating in them is a form of acquiescence to terrible crimes. The GOP would effectively be held hostage by these lawyers, needing to concur with whatever bizarre claim they made — Georgia governor Brian Kemp stole money and gave it to China! The Federal Reserve is trying to destroy the economy on behalf of George Soros! — or suffer the consequences of Wood-Powell “Republicans must stay home and not vote” rallies in their backyard.

What if Trump “stops” Powell and Wood by convincing Republicans in Georgia to elect Loeffler and Perdue to the Senate but otherwise raises no objection to Powell’s and Wood’s conspiratorial influence over the party. Is that a deal worth doing? The devil’s bargain made by establishment Republicans since 2016 is that they’ll overlook anything Trump says or does in exchange for victories — and it paid off. They won total control of government that year, and this year the Trump-led GOP made gains in the House and will probably end up holding the Senate. Trumpism has proved it can win! The catch is that, as the price of winning, you have to tolerate the mainstreaming of characters like Wood and Powell and Giuliani and the entire MAGA circus that’s surrounded the president for four years. You have to be willing to tolerate election officials being forced to flee their homes under threat while a gigantic chunk of your base says, “Good, the traitors deserved it.” You have to tolerate Mike Flynn, former general and National Security Advisor, calling openly for martial law.

Worth it? I think Geraghty might say that the problem is self-correcting. After all, if Wood and Powell convince Georgia Republicans not to turn out for the runoffs, Democrats will win and the GOP will be forced to start marginalizing its conspiracy kooks.

But what if Loeffler and Perdue win because Trump manages to convince voters to turn out while also encouraging those voters to keep it up with his election trutherism? What if Republican officials in various states, starting with Georgia, end up being successfully primaried by kooks in 2022? What if some of those kooks even get elected on the theory of “party uber alles”?

The president’s spent the past month trying to convince state legislators to pull off a soft coup by voiding their election results and handing him their electors instead, and he doesn’t seem to have lost any meaningful support within the party. Viewed in that context, what does it mean to “stop” Lin Wood and Sidney Powell at this point? It’s already their party, even if their scheme to block Loeffler and Perdue this time doesn’t quite come off. And establishment Republicans know it. That’s why they keep their mouths shut.

Doug Collins @RepDougCollins won over 50% & @KLoeffler lost. She & her husband are in over their heads in Communist China money. That is why she does not demand GA legislature be ordered into special session.

Wake up, GA & America! We must #FightBack against the Communist Wave. https://t.co/A70U151MaO