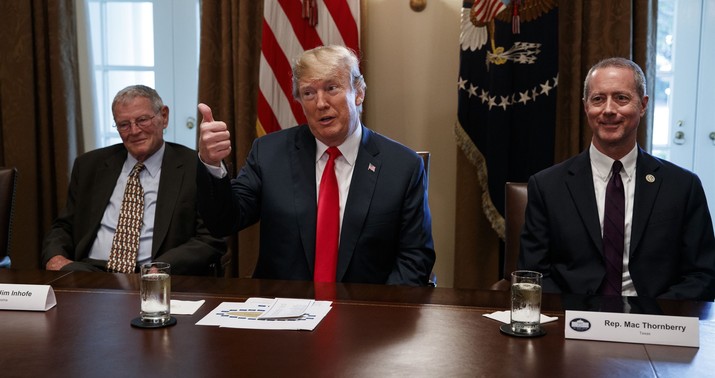 There’s not a lot to say here that wasn’t said in this post except that the president’s following the same M.O. with the defense bill that he’s followed with his election-fraud complaints. In both cases he won’t end up getting his way and will end up doing damage to his own legacy in the process, but it’ll give him and his more devoted fans an excuse to call Republicans who didn’t go along with him “sellouts.” Two different flavors of populist kabuki.

Very sadly for our Nation, it looks like Senator @JimInhofe will not be putting the Section 230 termination clause into the Defense Bill. So bad for our National Security and Election Integrity. Last chance to ever get it done. I will VETO!

But doesn’t get rid of Big Tech’s windfall, Section 230, a grave threat to National Security. I will VETO! https://t.co/QI7BfNc7hb

He’s actually adding new demands as we get closer to the vote on the bill in the House and Senate next week, knowing that these won’t be added either:

A provision is in the NDAA for the renaming, or even desecration, of National Monuments in National Parks. This is not what our Country wants!

Jim Inhofe, the head of the Senate Armed Services Committee, was actually overheard talking to Trump on speakerphone two days ago and telling him that, ah, it’s a little late in the process to parachute in a demand as momentous as repealing Section 230. Many new federal laws have only a glancing impact on Americans’ daily lives, but nuking 230 would hit the entire population in the gut as their favorite websites were scrambled to limit user-submitted content for liability reasons. You don’t make a move as drastic as that as an afterthought to a spending bill, especially a spending bill that addresses an unrelated policy matter. “Section 230 has nothing to do with the military,” said Inhofe to the media. “I agree with his sentiment, we ought to do away with Section 230. But you can’t do it in this bill. That’s not a pertinent bill.”

In his eavesdropped conversation with Trump, Inhofe also tried to impress upon that time is of the essence. “This is the only chance to get our bill passed,” he told the president, which isn’t exactly true — but is true enough.

The 4,517-page, $740.5 defense authorization bill for fiscal 2021 unveiled Thursday is the product of months of negotiations between House, Senate and Trump administration officials. Congressional aides said they expect the bill to pass the House early next week, with the Senate following a day or two later…

A presidential veto also brings with it problematic timing issues for Congress. Both the House and Senate are scheduled to begin holiday recess at the end of next week, and the current congressional session ends on Jan 3.

Enrolling the massive defense policy bill and sending it to the White House typically takes a week or more. Trump will have 10 days to decide whether to issue the veto.

That timeline could leave congressional leaders scrambling to schedule a veto override vote and fly members back to Capitol Hill just days or hours before the new session of Congress is seated.

There’ll be enough votes in Congress on January 20 to pass the bill with Biden’s signature but that means waiting six long weeks to fund the Pentagon. Even if the House and Senate have the votes to override Trump’s veto now, the timing of doing so is unclear:

Trump is dug in on vetoeing NDAA.

could be the first time in 6 decades that the NDAA doesnt pass.

And over tech law — nothing to do with the military. https://t.co/G1cwOUqrYf

The conventional wisdom is that both chambers *do* have the two-thirds they’d need to override Trump. Steny Hoyer apparently said as much this morning, although his basis for believing it is also unclear. It’s true that the bill initially passed the House in July with a greater than two-thirds majority, 295-125, but that was before Trump seized it as a battlespace for a culture-war skirmish over Section 230. That was also before he staged his ultimate loyalty test, demanding that all Republicans endorse his belief that Joe Biden’s victory was rigged. It was one thing for a House Republican in a solid red district to cross him in July, when the only sticking point in the bill was the boutique issue of whether military bases named after Confederates should be renamed. It’s another thing for them to defy him now, when he has a bunker mentality about the election and is trying to make the bill a proxy war between Big Tech and the populist right.

There are Republicans in Congress who are willing to go along with his new demands. Are there enough to prevent a veto override?

Still, some Republicans sided with Trump trying to push the issue of Section 230, which conservatives and GOP lawmakers have long asserted gives big tech companies the ability to unfairly censor their voices.

“I support him using all the leverage he can,” said Sen. Lindsey Graham (R-S.C.), a Trump confidant.

Sen. Josh Hawley (R-Mo.), one of Congress’ fiercest critics of big tech corporations, said he supports Trump’s move “100 percent” and that his demand is “absolutely reasonable.”

Hawley is Hawley, a guy who’ll say anything Trump wants him to in order to preserve his future presidential prospects — like the idea that this eleventh-hour Section 230 demand is “absolutely reasonable” when it absolutely isn’t. Graham has no reason to cover for Trump here apart from pure sycophancy, though. His distinguishing characteristic as a politician is his hyper-hawkishness and he just won reelection comfortably. He won’t have to answer to Trumpist voters again for six years. If ever there were a moment for him to stand up to Trump, it’s a moment to appropriate military funding without delay. He can’t do it.

The point, though, is that this bill *will* pass eventually without Section 230 reform just like Joe Biden *will* be sworn in on January 20. Trump’s not achieving anything meaningful with his obstructionism, just making it harder for his party to negotiate the political landscape after he departs. And making it harder on the military too in the case of the defense bill, of course, if only for a few weeks.