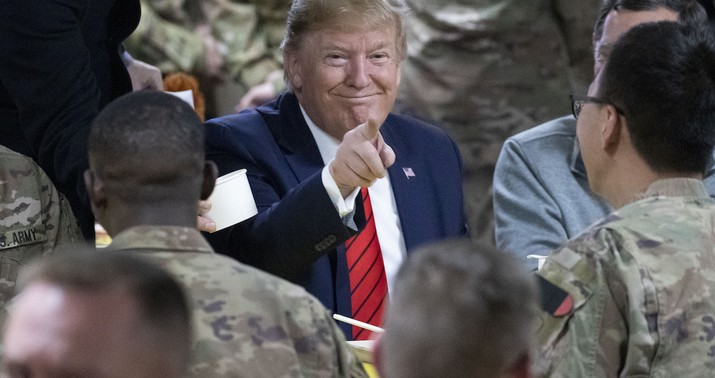 The proper response from Congress to a threat by a lame-duck president to hold up money for the Pentagon is to laugh, tell him to get bent, and then override his veto. But because Senate Republicans find themselves beholden to a personality cult, and because Section 230 has become a hobbyhorse both for true populists and fake populists like Josh Hawley and Ted Cruz, this threat might cause some anxiety within McConnell’s caucus.

Trump’s actually threatened to veto the defense spending bill twice in the past 10 days. Initially he vowed to block it unless Congress stripped out the language it contains authorizing the Pentagon to rename military bases currently named after Confederate generals. That’s a culture-war sticking point for him but it’s unanimously backed by congressional Democrats and even enjoys some support among congressional Republicans. The idea of the president blocking military funding in 2020 to defend the honor of long-dead traitors like John Bell Hood is so insane that it scarcely feels real, but it’s real. We might have a last-second showdown on Capitol Hill between the executive and the legislature with U.S. military readiness hanging in the balance because Trump won’t budge on honoring the heroes of the American south’s defunct slaveholder regime.

But now he’s gone and upped the ante. He wants the language about bases out of the bill and some new language added in:

…..Therefore, if the very dangerous & unfair Section 230 is not completely terminated as part of the National Defense Authorization Act (NDAA), I will be forced to unequivocally VETO the Bill when sent to the very beautiful Resolute desk. Take back America NOW. Thank you!

I’d like to hear him explain why it’s a threat to national security that Twitter can’t be sued when some cretin uses its platform to defame someone. Clearly the natsec argument is just a fig leaf to justify including Section 230 repeal in the defense bill.

My hunch when I saw his tweets was that maybe he floated it as leverage to convince Democrats to strip out the language on Confederate-named bases after all. (Some House Dems are open to doing so, not wanting to hold up money for the military.) That is, if they made a concession by backing down on that, Trump would make a concession by backing down on Section 230. According to Axios, though, the opposite seems to be true. Trump is reportedly willing to cave on the bases if Democrats will go along with his Section 230 proposal.

A senior House staffer said the issue has no chance of success with Democrats.

“It’s a f***ing joke,” said the staffer, who spoke anonymously to discuss private negotiations. “This is a complex debate that has no business as an eleventh-hour airdrop.”

The senior staffer said the push to include other proposals targeting Section 230, even a bipartisan bill led by Senate Majority Whip John Thune (R-S.D.), in the defense bill won’t make it either. “Full stop,” the staffer said…

The House and Senate passed their versions of the defense bill with enough bipartisan support to overcome a potential veto. It’s unclear if those margins would hold up if Trump followed through on the threat.

Maybe that’s Trump’s strategy. He may have feared, justifiably, that there’d be 20 Republican votes in the Senate to override his veto if the only sticking point were a boutique issue like the naming of U.S. military bases. So he introduced a second issue with more populist heft knowing that it would have support among righties who are grasping for ways to punish Big Tech for liberal bias. No one’s getting primaried for crossing Trump on the appropriate level of respect for John Bell Hood. But maybe someone’s getting primaried for crossing him on repealing Section 230, especially with people like Cruz and Hawley around demagoging the issue for the next four years just in case Trump decides not to run in 2024 after all.

Having his veto overriden would be humiliating on top of the humiliation of having lost the election. The Section 230 gambit makes it less likely, if not quite impossible:

I will vote to override. Because it’s really not about you https://t.co/rN6Sbbn6rR

Whatever you think of repealing Section 230, the fallout from doing it would be sufficiently chaotic and far-reaching that it’s bananas to consider tossing it into an unrelated bill as an afterthought. It would cause a sea change overnight in how Americans communicate online; if you’re going to make a move like that, it should be debated in Congress openly and at length and without the sort of hard deadline imposed by the defense bill. We often remind Democrats when they screech about the urgency of gun control or amnesty that they had the numbers to pass either of those things when they controlled the White House and Congress in 2009 but chose not to. The same goes for the GOP during the first two years of Trump’s term, though: If they were serious about forcing Big Tech to limit content moderation by eliminating its immunity from lawsuits, the time to do it was 2017. Granted, Senate Democrats still had the filibuster, but there are some Dems like Elizabeth Warren who are open to revisiting Section 230 in the name of reducing misinformation online. Maybe McConnell would have found 60 votes.

So why, if this is some urgent populist priority, didn’t Trump make the push then instead of now, when he has one foot out the door and congressional Democrats have zero reason to compromise with him?

Reportedly Senate Republicans might try to compromise with Trump on this by inserting language into the defense bill that doesn’t fully repeal Section 230 but narrows it. One bill floating around is the Online Freedom and Viewpoint Diversity Act sponsored by Republicans Roger Wicker, Lindsey Graham, and Marsha Blackburn. It would replace the catch-all language in Section 230 authorizing platforms to moderate all “objectionable” content with new language limiting them to content that promotes “self-harm” or “terrorism” or is otherwise “unlawful.” So if Twitter were overrun with QAnoners or Holocaust deniers or conspiracy cranks of other stripes and wanted to boot some of them, would it be free to do that? Not under this act as far as I can see, unless it wanted to lose its immunity from liability under Section 230. The OFVDA would force tech platforms to behave more like governments do in how they restrict speech, which sounds nice until you consider it would turn sites like Facebook and Twitter into even bigger toilets of propaganda and extremism than they are now.

Every time I write about Section 230 I end up with the same proposal: Congress should simply fund its own social media site as a competitor to the big boys and enforce First Amendment rules on content moderation. Anything goes apart from libel and true threats. The site will be overrun with nuts within its first hour; there might even be enough of them to hurt Facebook’s and Twitter’s bottom line. If McConnell wants to compromise with Trump on Big Tech action in the defense bill, that’s what he should do. Or he could take the easy way out and explain to him that once Twitter is responsible for libelous claims made by its users it’ll ban Trump immediately to protect itself from being sued over some of his wilder accusations and conspiracy theories. (Dominion Voting Systems would no doubt love a crack at Twitter’s deep pockets.) The president acts always and everywhere from self-interest. Convince him that repealing the law would end his access to his favorite website and he’ll give up.