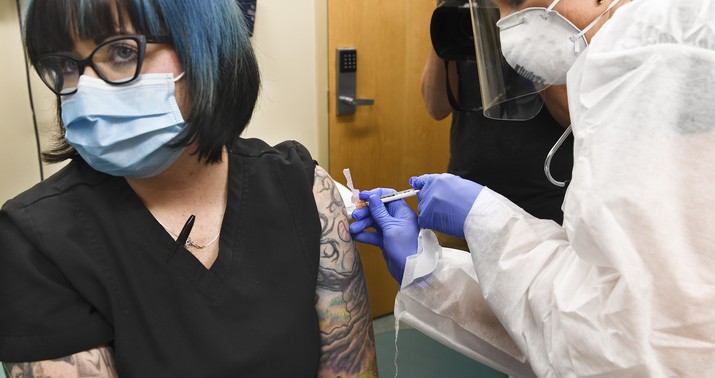 This idea appeals to me. If we’re destined to do one last round of COVID stimulus to prop up the economy before the vaccine finally ends this nightmare, why not get maximum bang for our buck?

We want as many people as possible to get vaccinated as soon as possible and we have a gigantic pot of money we’re going to be doling out. Seems like there’s an obvious incentive scheme in the offing here, says Democrat John Delaney.

But there are caveats.

It is a stimulus check & big vaccine incentive rolled into one

Result: more people get vaccine, it saves lives, helps people financially, and the $400 B pays for itself w/ economic boost from ending pandemic

RT if you agree #vaccinestimulus

He makes a fair point about the stimulus paying for itself. The sooner the pandemic ends, the sooner accelerated economic growth begins. Give people a reason to rush out and get the jab in May instead of, say, July, and that’s two extra months of economic expansion you’ve just bought for yourself.

The big caveat: The vaccine won’t be available to everyone immediately. Some people, like young adults, will be sent to the back of the line because they’re better able to fend off a COVID infection prior to vaccination than older adults are. Why should twentysomethings have to wait several more months than sixtysomethings for their $1,500 when they need the money just as urgently as their elders do? More urgently, in fact, since sixtysomethings tend to have nest eggs to see them through lean times. Young adults with fewer savings are closer to the edge.

People need money now. Yesterday. So if we’re going to do Delaney’s idea, most of the new stimulus will need to be front-loaded. Beefed-up weekly unemployment benefits should be made available immediately, not contingent on getting the vaccine. If that’s not enough, Congress could do a round of $1,000 checks up front, with no strings attached, and then create a “vaccine incentive” via a second check for $500 available to anyone who’s gotten the vaccine.

But that brings me to a second caveat. Would a “vaccine incentive” actually backfire by providing ammo to anti-vaxxers inadvertently? You know what they’ll say: If the vaccine were safe, they wouldn’t need to pay you to take it. Even so, I wonder if some people who are on the fence about getting it might eventually be wooed by the combination of the financial incentive and their own observations of the vaccine’s apparent safety. Having 10 friends get the jab with no ill effects might not be enough to convince a soft skeptic to follow suit. But having 10 friends get the jab with no ill effects plus the promise of a $500 payday might do it.

We should figure this out soonish because the head of Operation Warp Speed told CNN yesterday that the first vaccinations are probably less than three weeks away. How long until we have enough people vaccinated that the country starts to feel “normal” again, Jake Tapper asked him? Figure May, said Moncef Slaoui. Not very long at all.

Dr. Moncef Slaoui, chief scientific adviser to Operation Warp Speed, says he anticipates that thanks to vaccines, life in the US could return to normal around May pic.twitter.com/PpSDGYzpSb

May is the target for when herd immunity might set in to such a degree that infections begin to disappear. But we’ll start to see the benefits from mass vaccination long before then, a doctor at Brown pointed out yesterday. Herd immunity is a process, not a light switch where we go from uncontrolled spread to no more infections overnight. Every person is a freeway on which the virus might potentially travel to spread to others; when a person gets vaccinated, that freeway is closed. (People who’ve been infected and recovered are already closed, of course.) “Freeways” will be closing all over America, in increasing numbers, day by day, starting in December, giving the virus fewer routes to travel. The question right now is whether our recklessness in going ahead with holiday gatherings is going to seed so many infections before the vaccinations start that the number of daily cases will continue to rise for awhile throughout the winter even as “freeways” are being closed.

When we get to HI threshold, infections won't "disappear" overnight

But they will stop being self-sustaining

Although “normalcy” might not return until May, Jha thinks we might see major improvement by March — if we hold down transmissions now.

Which, tragically and inexplicably, we’re making a very conscious decision not to do.

Exit question that I can’t believe I have to ask: What’s going to happen first, herd immunity via vaccination or the final round of COVID stimulus? Delaney’s proposal only works in a rational, functioning country where the two parties recognize the urgency of citizens’ financial need and manage to get the money out *before* science solves the underlying problem. We don’t live in a rational, functioning country. But maybe the president-elect can put enough pressure on Pelosi to make a deal to make it seem like we do, at least for a little while.

“If outside, seek cover.”

CNN: Trump to drop 100-plus pardons and commutations by tomorrow — but will one have the name Trump on it?

“[A]ll she knew was she lives in a state that cares more about her toxic whiteness than her toxic brokeness.”

Graham on security for Capitol Hill during riot: ‘Where was Nancy Pelosi?”