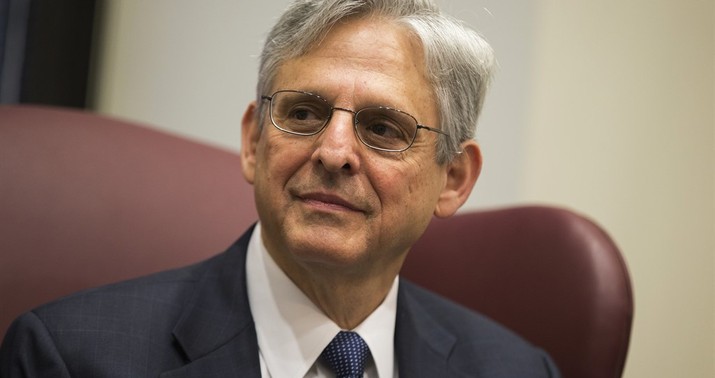 Behold the latest clue that we’re living in a simulation now, not actual reality. In reality, the Trump presidency wouldn’t be bookended neatly by a man whose Supreme Court nomination was ruined by Trump’s victory rising to become the AG responsible for potentially prosecuting him.

In a simulation of reality, though? Sure. How could it be otherwise? Having introduced this character in season one of “The Trump Presidency,” the writers were all but duty-bound to bring him back at the end of season four.

I don’t think this will fly, and not because Republicans will have an issue with it.

Federal appeals court Judge Merrick Garland is under consideration to serve as attorney general in the administration of President-elect Joe Biden, NPR has learned from two people closely following the process.

Garland, 68, is the widely respected former chief judge of the U.S. Court of Appeals for the D.C. Circuit. He launched his career at the Justice Department decades ago.

Garland oversaw the prosecution of Oklahoma City bomber Timothy McVeigh and gained significant management experience inside the sprawling department in the 1990s.

According to NPR, Team Biden likes Garland because they’re looking for a respected figure to restore a semblance of independence and esteem to the DOJ after the cronyism of the Bill Barr era. “I can’t think of a better possible pick by a Democratic president,” said NRO’s Ed Whelan upon hearing the news, for understandable reasons. Not only are Garland’s credentials as a former federal prosecutor and appellate judge impeccable, he has a reputation for being a bit tougher in criminal cases on the defense than the average Democratic-appointed judge. Back in 2010 SCOTUSblog singled out his jurisprudence on criminal law as being to the right of retiring Justice John Paul Stevens. “Judge Garland rarely votes in favor of criminal defendants’ appeals of their convictions,” wrote Tom Goldstein following a survey of Garland’s rulings on the D.C. Circuit. “Most striking, in ten criminal cases, Judge Garland has disagreed with his more-liberal colleagues; in each, he adopted the position that was more favorable to the government or declined to reach a question on which the majority of the court had adopted a position favorable to a defendant.”

If you want a tough-on-crime centrist in charge of the DOJ under Biden instead of a lefty, Garland might be the very best you can do. And there’s precedent for a judge leaving the bench to take over as AG. Remember that Dubya’s last Attorney General, Michael Mukasey, was a district court judge in New York for many years before taking the position.

Where Garland may run into trouble is with the left — which would indeed be ironic, as Matt Glassman says:

One funny element of this possibility: some progressives might need a lot of twisted logic to explain why keeping Garland off the Court was a travesty but putting him at DOJ is a really poor move.

(Those aren't inherently inconsistent, but it'd still be funny!) https://t.co/E9XOftHyGN

Progressives will want to know why Sleepy Joe chose an AG with a rep for being unsympathetic to criminal defendants’ rights when he could have picked Sally Yates, Doug Jones, or Deval Patrick instead, particularly since Garland is a dreaded white male. (“The names are a sign that Mr. Biden is weighing whether to emphasize extensive prosecutorial experience or credibility with social-justice advocates in making his selection.”) They’ll also be gaming out the potential prosecution of Donald J. Trump and reflecting that Garland would present a singular problem as the man in charge of that effort. No matter who’s running the DOJ, Trump will scream that he’s being persecuted politically by partisan Democrats if he’s charged with a crime. There’s no way for Biden to avoid that without appointing a Republican AG instead, and even then Trump would just start screaming about Never Trumpers. But Garland would make it unusually easy for Trump to claim bias since, after all, it was Trump’s own election that spoiled Garland’s Supreme Court dreams. “This is revenge by Garland because he didn’t get his seat!” the president will howl. No one personalizes politics the way he does, and Garland is a fat target.

Biden and his team will need to consider whether they want to run that risk and appoint Garland anyway, bearing in mind that Trump can and will personalize a prosecution no matter whom Biden names. If it’s Yates, he’ll call it an extension of “the Russia hoax” that snared Mike Flynn. If it’s Jones, he’ll remind everyone that Jones voted to remove him from office as a senator during his impeachment trial. If it’s Patrick, well, Patrick’s a good friend of the sinister Barack Obama. A political team shameless enough to accuse Biden of vote-rigging and to tie Hugo Chavez into it somehow is plenty shameless enough to accuse whichever AG is in charge of indicting Trump with some petty personal grudge or partisan vendetta. Biden might as well appoint the person he wants and let the chips fall where they may.

There’s also the small matter of whether Garland or any other potential nominee can get through a Republican-held Senate. The answer, pretty clearly, is yes:

Sen. Mitt Romney (R-Utah) said that he believes a “president ought to be able to pick his or her Cabinet barring someone who is out of the mainstream of either party,” and Sen. Susan Collins (R-Maine) gives “great latitude” to presidents to make appointments. Those two plus Sen. Lisa Murkowski (R-Alaska) give Biden a working majority on Cabinet picks, even if Democrats fall short in a pair of Georgia runoffs and the GOP holds a 52-48 majority.

“He’s our president-elect. All presidents have a right to their Cabinet,” Murkowski said. “Our job, our role is to make sure that he selects folks that are … within the mainstream. And are good, qualified credible candidates. And if he does that, sure, I am going to work with him.”

Opposition from the base to Yates over Russiagate might make things sticky for Romney, Collins, and Murkowski if she’s the nominee but I doubt Patrick, Jones, or Garland would have trouble. Jones might be confirmed comfortably as a show of collegiality towards a former member of the Senate. And some Republicans might vote for Garland partly as a show of conciliation over his failed 2016 SCOTUS nomination. He was well qualified for the Court; as late as mid-October that year, it looked like he’d end up being seated as a justice eventually after Hillary won the election. Trump’s upset was a tough break for him. Centrist GOPers might view confirming him as AG as a bit of a make-up call.