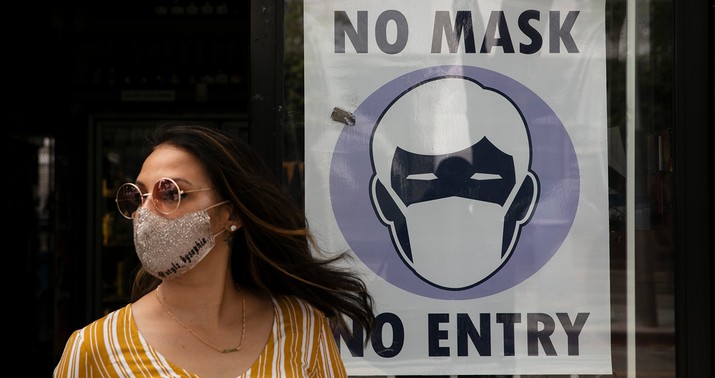 This is the most minimal restriction they could impose, targeting only public gatherings of eight or more. Schools, workplaces, and private gatherings remain legal. But it’s also the first instance I’m aware of in which they’re imposing legal penalties for violating a social-distancing rule. A few weeks ago they issued “recommendations” that were technically mandatory but which carried no punishment. As of today, they’re playing hardball.

It’s a Scandinavian version of the quote from the governor of Wyoming that I posted earlier. He too had been holding off on penalties and mask mandates, believing that citizens could be trusted to take precautions voluntarily to contain the spread. He’s now given up on that belief. “We’ve relied on people to be responsible and they’re being irresponsible,” he said recently. “If I can’t rely on you, we’re going to have to do something else.” Sweden’s now shifting to the “do something else” phase of their pandemic strategy.

Deaths there remain very low, but as we’re being reminded here in the U.S., the more cases there are the more deaths will follow. And cases in Sweden are still climbing, even after the “recommendations”:

The four-week ban on large public gatherings begins a week from tomorrow. Swedes are being asked, although not required, to observe the same rules for private gatherings as well.

The new limit is part of the Public Order Act and therefore is a law, not a recommendation like many of Sweden’s coronavirus measures. People who violate the ban by organising larger events could face fines or even imprisonment of up to six months…

“There should not be social situations with more than eight people even if they are not formally affected by the law. This is the new norm for the whole society, for all of Sweden. Don’t go to the gym. Don’t go to the library. Don’t have dinners. Don’t have parties. Cancel,” he said.

“These are very intrusive measures with no parallel in modern times,” said [Interior Minister Mikael] Damberg. “We don’t take it lightly to limit people’s rights […] but we see it as necessary.”

They’re also banning sales of alcohol in bars and restaurants after 10 p.m. On Friday they recorded just under 6,000 new cases, their worst day since the start of the pandemic, as well as 42 deaths. That’s not a lot in raw numbers given what we’re used to but on a per-capita basis it would translate to 1,200+ fatalities, on par with what the U.S. is enduring. A Swedish professor of virology claimed recently that they’re two weeks away from surpassing their peak of hospitalizations, with the number of patients needing hospital care reportedly rising faster there than in any country in Europe. The country’s education minister says that closing schools — which Sweden has famously declined to do so far (at least for younger students) — is now on the table.

Meanwhile, here in the U.S., we’re about to have a holiday devoted to gathering indoors in large groups around the same table for hours on end. I wonder how many Americans who are only barely paying attention to COVID news will justify their decision to hold a big Thanksgiving dinner this year by telling themselves, “Hey, Sweden doesn’t have any rules and they seem fine.”

What went wrong with the country’s strategy? First, as noted, not everyone trusted to practice personal responsibility in limiting infections will do so. Eventually the state will step in and begin taking away opportunities to socialize — although I don’t know how effective a rule will be that allows private parties of whatever size but not public ones of more than either. Presumably a ban on private gatherings will arrive soon enough. Second, Sweden’s government appears to have been counting on its strategy during the spring and summer to have produced a degree of herd immunity by fall that would stave off a severe outbreak this winter. For instance, a Swedish model published in April estimated that one-third of Stockholm’s population would have immunity by May 1. A month later, though, antibody testing found that just 7.3 percent of the city’s population was likely immune, a bad omen for the country’s ability to avoid a second wave.

If you’re going to take the risk of not locking down, you expect to be rewarded with a shorter pandemic than other countries. Where’s Sweden’s reward?

The country’s former top epidemiologist criticized her successor, Anders Tegnell, for his strategy towards the virus in an interview last week. “Wishful thinking — when you don’t believe in the worst scenario — has been guiding Swedish decisions too much,” she said, adding of Tegnell’s hopes for herd immunity that “I hoped he was right. It would have been great. But he wasn’t.” The most insane aspect of that strategy is the fact that, since day one, western scientists have been bullish that a vaccine to prevent COVID could be developed and that it might be done in record time, within a year. Herd immunity is what you’d pursue if there were no chance of the scientific cavalry riding to the rescue; in a situation like that, you’d balance the need to protect hospitals from being overwhelmed by a burst of infections with the need to not let the economic misery of lockdowns drag out interminably. But in a world where the vaccine is real and it’s coming soon, it’s insane not to buy time by focusing on limiting the spread. Flatten the curve, wait for the vaccine, and watch as thousands of lives that would have been lost amid a herd-immunity approach end up being saved through vaccination. Good luck, Sweden.