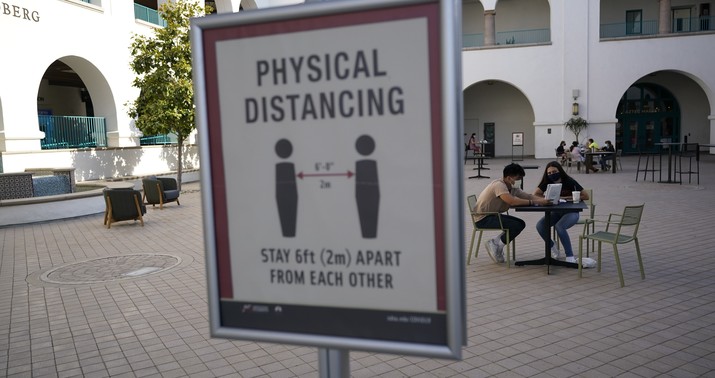 Sweden’s approach to the virus continues to get caught in the middle of a debate over what qualifies as a “herd immunity” strategy. Some people think that means “anything short of a lockdown.” Others think it means pure laissez faire, with everyone encouraged to go about their business as the virus cuts a swath through the population until it runs its course.

The Swedish government has insisted all along that it wasn’t pursuing herd immunity. What it’s done instead is take a middle-ground approach, which increasingly resembles the U.S. approach. It closed high schools and universities in favor of distance learning. It left elementary schools and businesses open, but encouraged people to take sensible precautions against infection. It advised the old and vulnerable to isolate themselves.

So when the head epidemiologist calls herd immunity a “futile and immoral” approach, he means it in the second sense of the definition. He’s obviously not a “lockdowns or bust” proponent, but he’s not a Trumpy “you’re a pussy if you’re worried about this” guy either. Sweden still isn’t formally locking down, but they’ve shifted towards stronger recommendations that people distance themselves as cases begin to rise.

It is “futile and immoral” to seek herd immunity as a protection from a pandemic, and the transmission of an infectious disease like Covid-19 cannot be fully halted without a vaccine, Sweden’s chief epidemiologist Anders Tegnell has said…

Dr Tegnell, who was the key person behind [Sweden’s] approach, said Sweden is now at a critical juncture as the number of daily cases has increased by 70 per cent in a week…

Last week, Sweden had its first regional lockdown when around 170,000 citizens of Uppsala, a town near Stockholm, were asked to work from home. They were also asked to avoid social gatherings, physical contact and public transport. Though Dr Tegnell claimed it is not a lockdown as it is not shutting down of the whole society.

Why is Sweden shifting to a “soft lockdown” approach in some places? Because:

All countries’ COVID graphs are misleading in the sense that their spring outbreaks were almost certainly bigger in reality than the outbreaks they’re experiencing right now. The lack of testing in March and April meant that most cases went undetected. Even so, it’s impossible to look at that graph and believe that Sweden has achieved herd immunity, as the many American admirers of the country’s approach to COVID had hoped. On the contrary, Tegnell and his team are getting nervous about hospital capacity again:

“We’re beginning to approach the ceiling for what the healthcare system can handle. Together, as during the spring, we can push down this curve and avoid the strain on healthcare,” Chief Epidemiologist Anders Tegnell told a news conference.

Sweden’s numbers need some context. Famously, they had a very, very high rate of deaths per capita earlier in the pandemic, particularly relative to the much lower rates in neighboring Norway and Finland. But daily deaths have remained exceptionally low over the past three months, to the point where now various other European countries — and the U.S. — have a higher death rate. (Sweden still has the 15th highest rate of deaths per capita among major nations.) As for daily cases, the trend is bad but it could be worse. Here’s where Sweden stands relative to the U.S. and UK:

Lotta vertical-ish slopes there. But here’s what happens when you add France and the Netherlands for context:

And, er, here’s what happens when you add Belgium:

The pandemic is now sufficiently out of control in France and Germany that both countries have reimposed partial lockdowns. France will keep schools open, which is smart given the data showing low rates of transmission there, but bars and restaurants are closed and people are being told to stay home unless they have an essential reason to leave. German restrictions are similar, including a ban on gatherings larger than 10 people if they involve multiple households. The UK is also considering a wider lockdown. We’ll be grappling with the same issues soon here, albeit at statewide and local rather than national levels. Trump likes to say that media coverage of COVID will disappear on November 4, once the pandemic can no longer damage him politically, but that’s absurd. As cases here reach ugly European rates and deaths start climbing again, coronavirus is likely to be the story of the winter.

Although I think he’s right that the coverage will shift in one important sense. It’ll go from “Why isn’t Trump’s government doing more to contain the virus?” to “Realistically, there’s nothing the federal government can do to contain the virus.” Which is sort of true at the moment, apart from exhorting people to take strict precautions.

Speaking of which, the Daily Beast reports today that members of Trump’s own administration believe that the White House’s new strategy towards the virus, in deed if not in name, is … herd immunity.

But those working on the government’s COVID response say that the attempts by the White House and Atlas to steer clear from using the phrase “herd immunity” are merely a game of semantics. Privately, one of those sources said, the actual policy pursuits have been crafted around a plainly herd immunity approach; mainly, that the government should prioritize protecting the vulnerable while allowing “everyone else to get infected,” that source said…

“This is all Atlas,” said one of the officials who spoke with The Daily Beast. “I find it disturbing… bordering on ludicrous. Everything that comes out of Atlas’ mouth is geared towards letting it rip and then just worry about protecting the vulnerable. Everything he says points to the fact that he believes herd immunity is a good option. Yet he denies he’s pushing herd immunity as a strategy saying ‘No that’s not what I’m doing.’ But he is.”…

Health officials say that the practical acceptance of herd immunity by the president could lead to a dangerous and potentially deadly new phase in the pandemic, even if it is accompanied by a simultaneous effort to screen and protect seniors and those with comorbidities. Scientists warn that if the administration continues to focus just on protecting, for example, individuals in nursing homes, it will overlook those people who fall outside of the most vulnerable population but who could still contract the virus, survive it, and have long-lasting health complications.

In one sense, the idea of a national herd immunity strategy is farcical. Most people aren’t going to carry on as they did pre-pandemic just because some government moron encourages them to. Americans follow the news; they know what the case counts look like right now, no matter how many times Trump wheezes that we’re “turning a corner.” If the election polls are accurate, he’s about to get tossed out on his ass largely because he refused to change his tin-eared pollyannaish tone about COVID. We could pass a constitutional amendment tomorrow preventing states from ever again forcibly closing a business due to viral concerns and it’s not going to affect the extent to which most Americans interact outside their homes this winter.

But it’ll affect the extent to which some do. There’s always a group that takes its cues on what is and isn’t proper from what the government allows, and there’s probably enough people in that group to generate a *big* burst in cases that’ll inevitably spill over into the group that’s trying to isolate itself. If we could wall off one group from the other and let the “herd immunity” fans go around coughing in each other’s faces with no fear of spillover into the other group, that’d be lovely. Let ’em cull the weak and gain immunity for the rest. They can update the rest of us on how it went after we’ve all been vaccinated. But life isn’t so simple, alas. We’ll see what happens during the lame-duck session if Trump loses, with the current president encouraging people to have big get-togethers on Thanksgiving and Christmas and the incoming president warning them that that they’ll be incubating an even more inescapably huge outbreak. Two Americas!

Oh, one last point. Look back again at that gory graph above of Belgium’s cases per capita blowing up. They’re north of 1,200 cases daily per million people! Now go look at North Dakota’s latest COVID numbers. Yesterday they had 1,222 new cases — in a state with a total population of just 762,000. That’s a rate of 1,604 per million people. Parts of the U.S. are already outstripping the worst of Europe.