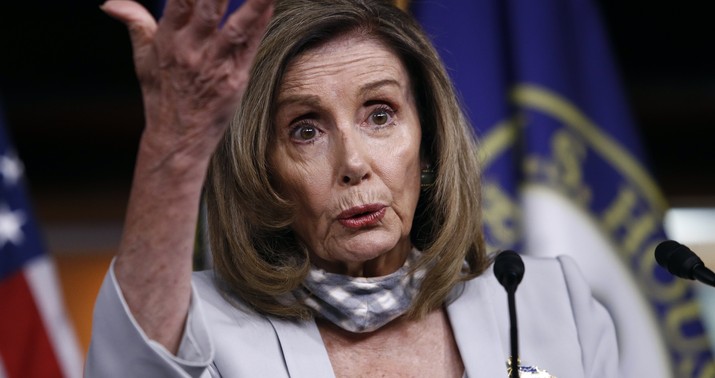 Not an earth-shaking revelation, as Slotkin represents a Republican-leaning district in Michigan and didn’t vote for Pelosi in 2019 either. (She voted “present.”) But it’s newsy in that Pelosi will have a narrower majority next year and can’t afford as many centrist defectors in the Speaker’s race as she had last time.

And it’s also newsy in a more general sense, namely that there’s a bunch of enjoyable “Dems in disarray” material online today and Slotkin’s frustration is of a piece with it.

“I will not be voting for Nancy Pelosi,” Slotkin told Tim Alberta of Politico. “I have no idea if people are gonna run against her, or who might run against her. And I will of course have this conversation directly with her. But I believe we need new leadership. I would love to see more Midwesterners, because if you look across the leadership… I respect these people, but it’s New York and California.” That’s the next two years for House Dems in a nutshell: Staring down the barrel of a GOP takeover in 2022, how much room to maneuver will the moderates in the caucus from flyover country be given by the left in the name of holding the majority? Will progressives backburner talk about socialism and defunding the police to help their centrist friends?

If so, for how long are those ideas supposed to sit on the back burner? It’s what lefties believe. If centrists can’t get elected when progressives open their mouths then the left is being asked to shut up forever. Which would be nice, but isn’t going to happen.

Based on Slotkin’s qualified praise for Trump in Alberta’s piece, I think she’d probably hedge by saying that the *substance* of many lefty ideas is fine but that the sloganeering is poisonous. “Socialism” is a scary idea to many Americans — but Medicare for All polls quite well. “Defunding the police” is insanity — but reforming PDs was plenty popular in surveys conducted after George Floyd’s death. Beyond policy, there’s also the problem of Democrats increasingly being viewed as the party of elites, which is a bad look when you’re trying to claw back votes in middle America.

“It’s not just that he eats cheeseburgers at a big celebratory dinner. It’s not just that he does things that the common man can kind of appreciate. And it’s not even because he uses kind of simplistic language—he doesn’t use complicated, wonky language, the way a lot of Democrats do,” Slotkin said. “We sometimes make people feel like they aren’t conscientious enough. They aren’t thoughtful enough. They aren’t ‘woke’ enough. They aren’t smart enough or educated enough to just understand what’s good for them. … It’s talking down to people. It’s alienating them. And there’s just certain voters who feel so distant from the political process—it’s not their life, it’s not their world. They hate it. They don’t like all that politics stuff. Trump speaks to them, because he includes them.”…

“I remember, long before, literally, Donald Trump was even a twinkle in our eye, the way that people in my life here couldn’t stand political correctness. And I think [this is] the same kind of sentiment,” Slotkin explained. “Because the political correctness is thinking you’re better than somebody else—it’s correcting someone. Now, I happen to believe that we live in a different era, and that we have to be better than we were in previous eras. … But people do feel looked down upon.”

As George Orwell said, if you want a vision of the future imagine AOC woke-shaming Rust Belt factory workers forever. Speaking of whom, even the head of her own state’s Democratic Party was caught grumbling this week about Ocasio-Cortez’s high profile within a coalition that needs to be able to win in purple districts, not just in monolithic blue districts where DSA heartthrobs can romp by 60 points. “AOC has no standing on how to run a general election in the suburbs and upstate. AOC is in a district that’s 6-1 Democrat and she couldn’t find a Republican in her district with binoculars,” said Jay Jacobs to the New York Post. “I invite AOC to come to Long Island and stand for election in one of our districts. You’ll see different results.”

Dems who spoke to HuffPost also had the knives out for Ocasio-Cortez. “We have tried their way repeatedly and lose every single time,” said one Democratic strategist of progressive messaging. “Don’t get offended that we don’t want to try it again.” Reporter Matt Fuller reminded readers that lefties who have run uncompromisingly leftist campaigns in moderate districts have in fact flamed out over the last few years, both in the 2018 midterms and just last week with losses in Nebraska and upstate New York. Quote:

“There’s a reason AOC was noting how few members actually asked her for help,” this Democrat said. “And the reason is she would do more harm than good in most districts.”

“Aligning yourself with AOC is a good way to become a Twitter celebrity,” the lawmaker added. “But it’s a bad way to stay a member of Congress.”

Hoo boy. Ironically, Ocasio-Cortez and the Squad may have been for Democrats what Trump was *supposed* to be for Republicans, a hugely visible, extremely polarizing personality who’d supposedly damage the party in congressional races. In reality, Republicans overperformed downballot by (probably) retaining control of the Senate and gaining seats in the House, leaving them set up to reclaim total control of Congress in 2022. Instead it was progressive agitators who were the anchor on their party — at least if you believe their enemies, the moderates in the Democratic caucus.

We shouldn’t personalize it too much, though. A theme that features in every “Dems in disarray” piece published since the election is how furious centrists were with the “defund the police” messaging, a phenomenon much broader than the Squad. According to Politico, “DCCC polled the issue over the summer as nationwide protests over social justice began dominating the headlines, finding it ‘incredibly damaging,’ according to a Democratic strategist familiar with the data.” The same Politico story notes that Cameron Webb, an African-American doctor who ran for a seat in a redder part of Virginia, looked likely to win but ended up losing by six points. “My opponent only talked about three words: Defund the police,” he told colleagues this week.

Another irony, though: Black activists in cities like Philly insist that the BLM protests that happened this summer were instrumental in raising political consciousness locally — and money nationally. “It was that organizing around police violence that actually led us to be able to mobilize folks to the polls,” said one organizer based in Pittsburgh to Citylab. “We took that energy and those resources that we got and for the first time we were able to hire people, and to recruit digital canvassers, and put money into things like voting festivals because we had access to those resources.” Strong pro-Biden turnout in cities may have made the difference between victory and defeat at the presidential level this year, and that turnout may not have been possible if not for the BLM demonstrations.

But it also may have made the difference for the GOP at the district level. Maybe that’s our explanation for how we ended up with divided government. And maybe it also kinda sorta proves that a Democratic presidential nominee couldn’t have beaten Trump this year with the “defund the police” baggage on his back *unless* he was already so well-known to voters as a mushy centrist non-radical that no one seriously believed he’d try to defund the police if elected. Sleepy Joe may have been the only Dem capable of winning under the circumstances.

By the way, as far as I know, there’s still no challenger to Pelosi in the Speaker’s race. Conceivably Slotkin and a dozen or so others could vote present and deny her 218, forcing Democrats to look elsewhere for leadership, but I find it impossible to believe that a master organizer like Pelosi would lose her grip in such a humiliating way. More likely, I think, is that the bad result last Tuesday night will ensure that this really is her last term in charge of the House. Democrats are likely to lose their majority anyway in 2022 and Pelosi’s already suggested that she’d step down that year. Maybe her caucus would have been more patient with her if they’d expanded their majority this year. They didn’t.

Q: "Do you take any responsibility for the loss of House seats?"@SpeakerPelosi: "I accept credit for winning the majority and holding the House." pic.twitter.com/7Q5unA6BAf