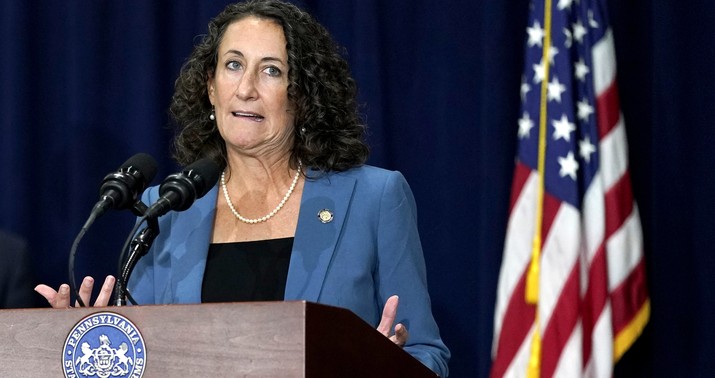 Noteworthy in that this is a win in court for Team Trump, which hadn’t had much success so far. But as far as I can tell the number of ballots affected is small and won’t dent Biden’s lead.

You probably remember the ruling from the Pennsylvania Supreme Court a few weeks ago allowing mail ballots received up to three days after Election Day to be counted. That decision was dubious, as state law set the deadline on Election Day; the court just sort of … bent the rules a little, reasoning that states need a little flexibility during a pandemic. The U.S. Supreme Court deadlocked 4-4 on whether to overturn that ruling and might yet revisit it now that Amy Coney Barrett has joined the bench. That meant that, in theory, the entire election could have come down to the status of those late-arriving ballots. *If* Pennsylvania’s electoral votes had turned out to be decisive, and *if* the vote there was so close that the late-arriving ballots would determine the winner, then we’d have a clusterfark for the ages.

But PA’s electoral votes aren’t decisive. And Biden has enough of a lead right now — 50,000 votes or so at last check — that whatever ends up happening to those 10,000 or so late-arriving ballots won’t matter.

Anyway, today’s ruling dealt with a consequence of the Pennsylvania Supreme Court’s decision to extend the ballot deadline to November 6 instead of November 3. Under state law, people who are voting for the first time need to prove their identity. (If you’ve voted previously, you don’t need to.) If you don’t provide proof of ID initially, you can still vote — but you need to prove that you are who you claim to be within six days of Election Day. The question in today’s case was, “When was ‘Election Day’ in Pennsylvania, exactly?” Was it November 3, as state law provides, in which case first-time voters had until November 9 to prove their identity? Or was it November 6, per the ruling of the Pennsylvania Supreme Court, in which case they’d have until November 12 to prove it?

Pennsylvania’s secretary of state issued an order saying that November 12 was the correct date. Nope, said the court in today’s ruling. State law has the final word. It was November 9. That means any first-time voter who cast a ballot and then showed up to provide ID from November 10-12 should presumably have their ballot tossed.

These ballots had been segregated pending the judge’s decision and have not yet been counted, so their disqualification will not affect the current vote count in Pennsylvania. Joe Biden won the state, and subsequently the election, on Saturday and currently leads President Trump by more than 53,000 votes.

It is not clear how many mail-in and absentee ballots fall into this category, and the Pennsylvania Department of State declined to comment on how many ballots would be affected. However, these ballots only applied to first-time voters whose identities had not been confirmed prior to the Nov. 9 deadline.

It was smart of Pennsylvania to segregate questionable ballots. Imagine the nightmare if they had had to pore through millions of mail ballot to find a few thousand that involved (1) first-time voters who (2) didn’t prove their identity initially and (3) failed to prove it by November 9. Yeesh.

How many votes might be excluded by today’s ruling, assuming that it stands? Hard to say, but pretty clearly not a meaningful number.

The number is likely to be vanishingly small compared to the larger pools of votes Republicans are seeking to have tossed in other ongoing court fights across the state.

For instance, in Philadelphia, the state’s largest county, elections officials on Wednesday issued a list of just over 2,100 mail ballots in danger of being disqualified because the voter had not provided proof of ID with their application — typically done by providing a driver’s license number — or the proof they did provide did not match information on voter rolls.

City officials issued the list in hopes that those voters could provide the necessary information by the Thursday deadline. But under the Commonwealth Court order, all of them will now be excluded.

Again, those votes weren’t part of Biden’s and Trump’s totals yet. They had been segregated and won’t count now unless an appellate court reverses today’s ruling. The big-picture takeaway, to the extent there is one, is that there’s a tiny bit more legal authority in Pennsylvania today for the idea that state statutory law determines ballot deadlines. SCOTUS could eventually point to this new ruling as guidance in tossing out all 10,000 late-arriving mail ballots.

But again, that’s a moral victory, not a meaningful one. Those votes haven’t been counted yet either, and even if they had, Biden’s margin in the state would allow him to lose 10,000 votes without real damage. It’d be worth around 0.2 percent of the overall lead. At the moment he leads by 0.8 percent.

Meanwhile, across the country in Arizona, there’s election litigation ongoing today. Apparently the conspiracy theory that Sharpie pens somehow affected ballots was raised — before Team Trump gave up on it:

SHARPIEGATE, R.I.P.: The direct and cross-examination has definitively laid to rest the conspiracy theory that Sharpie bleed-thru caused overvotes. Trump campaign’s cross did not touch it.

I’ll leave you with Arizona’s Republican attorney general, Mark Brnovich, who told Cavuto yesterday that he has no reason to think fraud was involved in Biden’s victory there.