Rush Limbaugh: I didn’t mean to say that Biden won the election 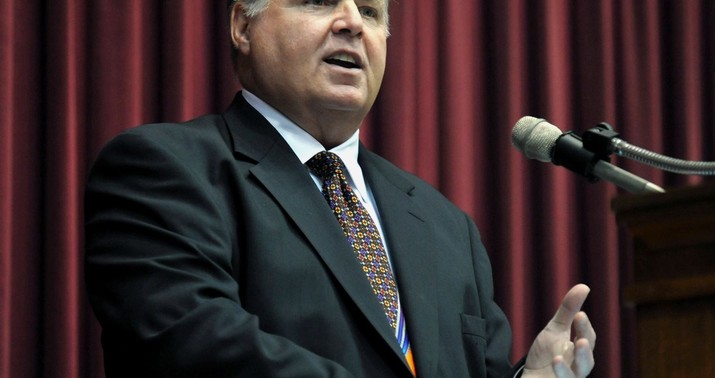 I didn’t hear his show this afternoon and nearly fell off the chair when I saw this tweet — not because I assumed it was true but because I knew it had to be false and was stunned that someone could have taken this meaning from something he’d said.

Conservative talk radio would never, n-e-v-e-r, cross its populist listeners at a moment when the stakes are as high as they are now. They’d never cross their listeners, period. Their business model is essentially a prisoner’s dilemma in which each guy has to dial up the Trump loyalty to 11 or risk having his audience defect to some competitor. There was no earthly way after the career he’s had that Rush was suddenly going to take it upon himself to try to deprogram righties who’ve bought the president’s “I was robbed” shtick.

Via Mediaite, here’s the quote that supposedly convinced Thomma — and Bret Baier — that Rush was admitting Biden had prevailed:

The guy that won that did not have any kind of massive pro-support. He was just the vessel. He was just the recipient whatever anti-Trump sentiment there was. He can tell himself all along he’s been elected president, because he has, but…there should have been away to counter that as part of the campaign. But you’ll notice that the Republicans and the Democrats never once tried to properly categorized the Biden support but it’s a moot point now.

“The guy that won.” “He can tell himself all along he’s been elected president, because he has.” Baier apparently heard that and sent a quick email over asking for clarity. Was Rush claiming that it was all over?

No, of course he wasn’t claiming that. For cripes sake. Even Mitt Romney hasn’t quite conceded the election yet. More Rush:

I didn’t say that. I’m dealing in some hypotheticals here, but I’ve never conceded the election. I’ve never said that this was over. I’ve just finished saying Trump’s got legal options open to him…I’m sorry if anybody misunderstood me.

Follow the link above to Mediaite to listen to the clips. Limbaugh blowing up the “I was robbed” storyline as it’s trying to get off the launchpad would have been roughly 8,000 times more scandalously “disloyal” than Fox News calling Arizona for Biden on election night. The entire point of talk radio is to amplify whatever message populists are pushing at a given moment. Rush turning around and doing a hard reality check on the state of the election would have been like the Vatican newspaper running an editorial questioning the divinity of Jesus. Not the right forum, whether there’s anything to that view or not.

The Occam’s Razor explanation for what he said is that of course he understands that Biden won — he’s a smart guy who’s been covering elections for decades — but he forgot himself momentarily while following a train of thought and let the truth slip. Either way, though, his underlying point is certainly correct: Biden was a mere recipient of anti-Trump sentiment. I made that argument myself in yesterday’s post about whether the election was a “repudiation” of Trump. I’m leery of calling it that because of how close the margin ended up being, how much Trump overperformed his polls, and how poorly Democrats did downballot. But if you define “repudiation” in terms of the winning margin and historic turnout having been due entirely to fervent dislike of the incumbent, then sure. You can make the case that this was a repudiation.

Chris Cuomo’s catching flak today for having made the same point last night in his own goofy way. After all, there are many presidential candidates who’ve been “spanked” worse than Trump was this year by common metrics:

Walter Mondale lost to Ronald Reagan by more than 500 electoral votes. LBJ took more than 60 percent of the popular vote against Barry Goldwater. Trump’s defeat wasn’t remotely in that class — except in one sense. Biden’s going to end up with the most votes of any candidate in American history (chiefly enabled, of course, by America’s population growth over time) and, as Rush and I have both pointed out, he’s going to owe much of that vote to fear and loathing of the incumbent. Remember all those poll questions during the campaign, “Are you casting your vote for Joe Biden because you support Biden or because you oppose Trump?” I don’t know how you’d go about quantifying it, but it may well be that no president has ever had a larger percentage of his opponent’s vote haul cast against him instead of for that opponent. If Cuomo wants to call that an unprecedented “spanking,” I guess he can.

I’ll leave you with this clip from GOP Rep. Clay Higgins, who seems totally fine and should probably quit Congress for a talk radio gig. He’d be worth $100 million overnight.